District results of the Competition announced on 25th April 2018. The theme was "A Different Perspective"


This year pupils from schools were set the challenge by RIBI to write a story or poem on the subject "A Different Perspective" . The competition was given tremendous support by schools across District 1145,and the clubs that encouraged submissions were delighted by the response. In one case having 96 Junior entries and 52 Intermediate entries from 2 schools. The entries were judged in three age groups Junior 7-10 Intermediate 11-13 and Senior 14-17. Each club then judged them and sent the best in each category to be judged at District level.  Sixteen clubs took part and the judges were impressed by the high standard received in the Intermediate category and the different topics covered by all ages.

The result was as follows: 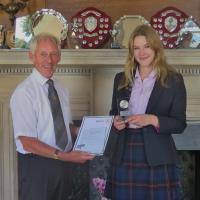 Young Writer, gets third place in the National Competition of 2017..

A Poem for Her Majesty Queen Elizabeth - 2016