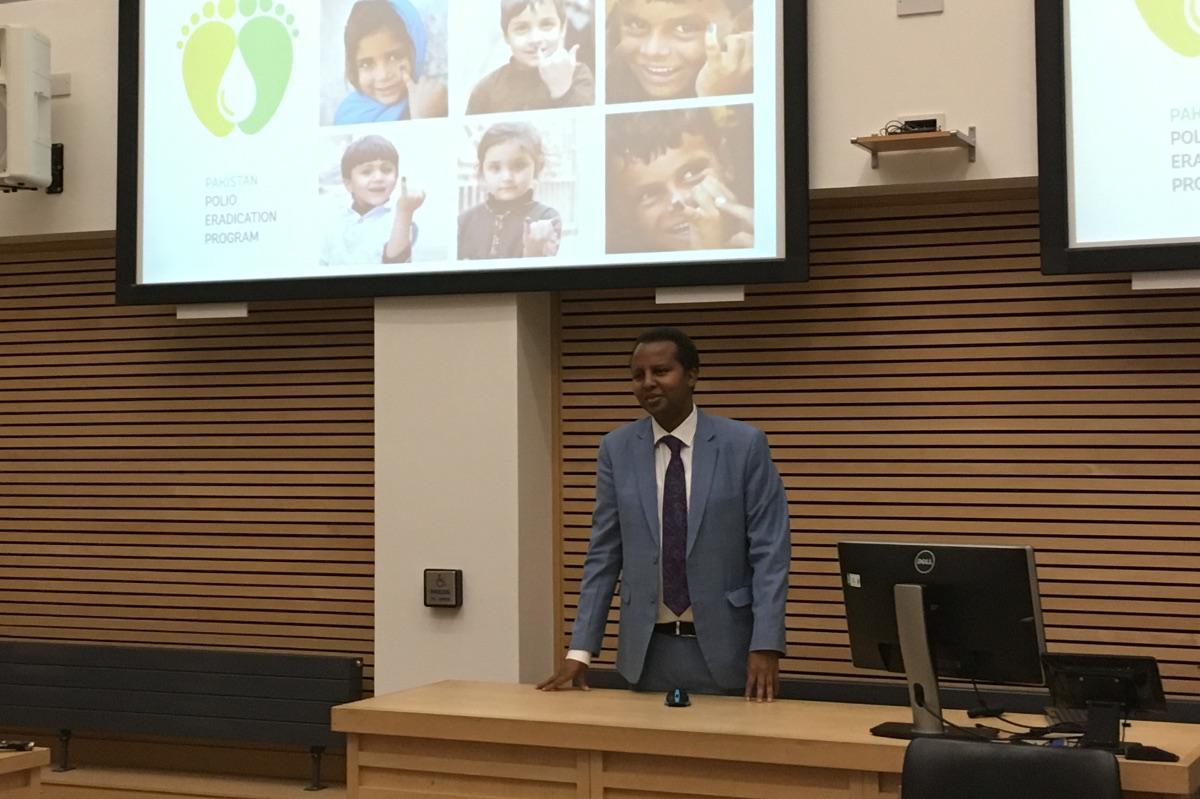 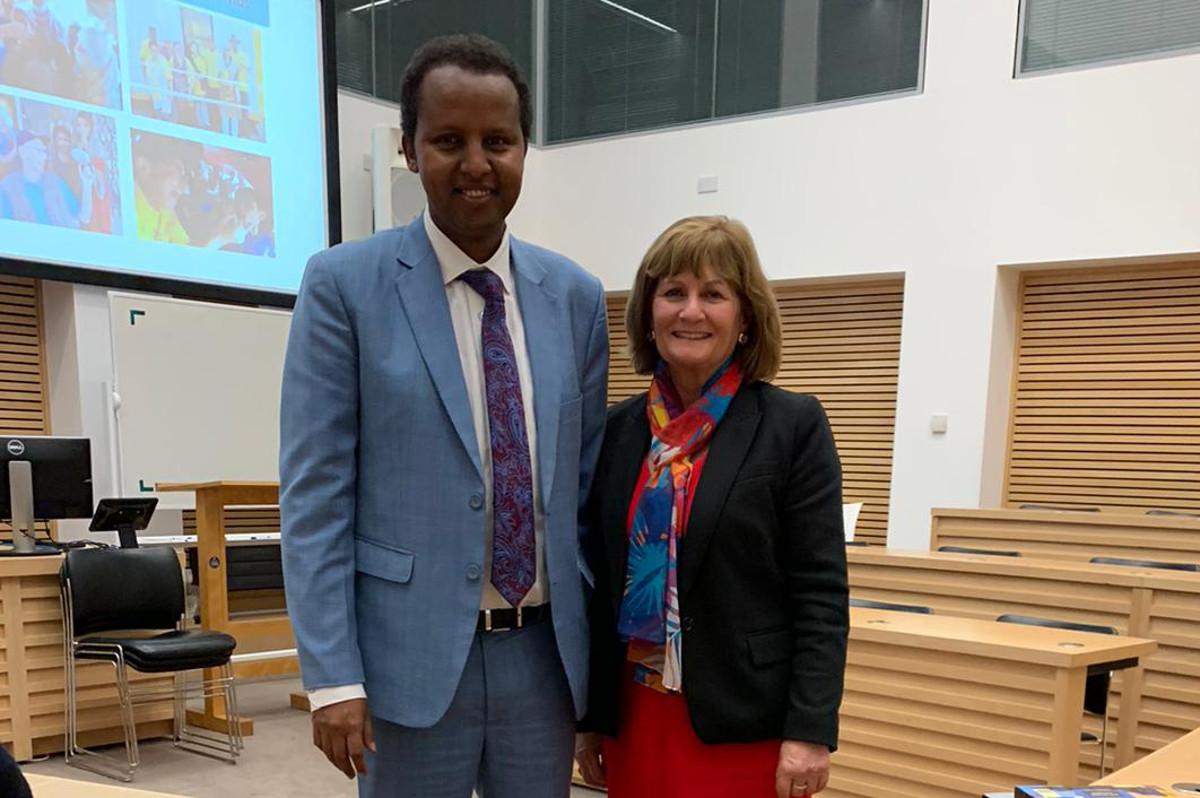 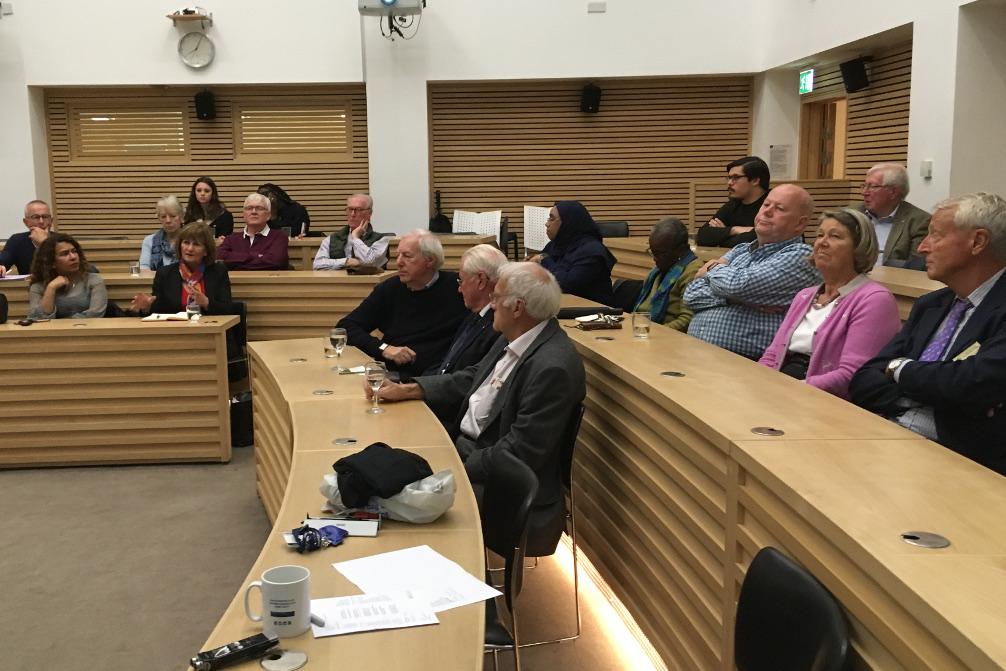 Return to the Polio homepage

Return to the Foundation homepage

Members of Rotary, Inner Wheel and Rotaract were treated to a rare chance to hear from someone directly involved in Pakistan’s Polio Eradication Campaign, when Dr Abdirahman Mahamud visited Oxford last week. Abdi contacted us to ask if he could meet with some Rotarians to update us the progress and challenges of the campaign and of course we jumped at the opportunity. Abdi is the Polio Eradication Initiative National Team Leader, for the World Health Organisation in Pakistan, and he spoke confidently and knowledgably and answered all of our questions, so that by the end of the evening we all felt much better informed about the work in his country.

Many of us know that the number of children affected by polio has increased in Pakistan this year, compared to the last couple of years. So far in 2019 (to 15th October), Pakistan has reported 72 cases and Afghanistan 16 cases. Over the last 25 years, cases have clearly declined, from over 2,600 cases in 1994, but there are some increases that can be linked to election periods, where political campaigning and changes in administration might mean that polio eradication becomes secondary in local district administrations for 7 to 8 months. Other increases can be linked to the Taliban’s ban of vaccinations in 2009. As Abdi explained:

“we’ve seen dramatic improvement, but then ups and downs during the last 15 years, related to the geo-political situation in the country”

The Key Challenge – The Missed Children

If we can vaccinate every child then we can end polio. This has been achieved in countries such as Sudan, despite being a poor country and with ongoing conflict. Unfortunately in Pakistan it has not been possible to reach every child. Of the 167 districts in Pakistan, 11 are classed as high risk, and children are not always available when vaccinators visit homes. Over one million children were missed in one recent campaign.

“As long as we are missing these children, polio will fight. It is a disease we are trying to eradicate and it’s trying to survive. It’s a competition between our efforts and the virus: wherever you have this vast majority of almost one million children who have not been vaccinated, polio will find them and we’ll end up with more cases.”

“to interrupt polio, you need to reach 95% of the children, consistently, not one time, but every time when you do a campaign.”

The scale of the campaigns is immense: in the high risk areas, covering approximately 40% of the country, there are nine vaccination campaigns each year. In the rest of the country, around 40 million children are vaccinated five times each year, by 260,000 frontline workers.

The Pakistan Polio Eradication Initiative is re-thinking its communications strategy. In the high risk areas of Pakistan, where there are nine vaccination campaigns in a year, each vaccinator who visits a family with children under 5 years is followed by monitors and supervisors, and this has been part of the quality assurance processes. However it is recognised that this can alienate and irritate people and that repeated knocks on the door lead to refusals by parents, so the plan is to change the approach and to have just the vaccinators visiting homes. The campaigns have been halted for September through to November to enable the polio eradication teams to build layers of trust through the communities and build alliances beyond the Global Polio Eradication Initiative members: Rotary International, World Health Organisation, UNICEF, Centers for Disease Control and the Bill & Melinda Gates Foundation.

Abdi explained that these communities might see the frontline workers as the only representatives of the government, focussed on polio, without making reference to clean water and sanitation. The politicians have been visiting these communities to say that they hear the concerns and will be able to address some of them. Both the Prime Minister Imran Khan, and the Chief of the Army have recently given their commitment to polio eradication as a priority.

“At the highest levels of the government, there is commitment to finish the job of polio eradication.”

And what about social media? In April 2019 in Pakistan, 35,000 school age children were admitted to hospital, with rumours that the polio vaccine had made them sick. This was an example of panic on social media and led to parents closing their doors and refusing vaccinators. The polio teams are coming up with solutions for Facebook and Twitter fake news and scaremongering, with help from the platforms themselves. There is collaboration with Facebook and the organisation recently announced that it was taking down anti-vac sites. WhatsApp however still poses a challenge though due to its encrypted access and this still needs work.

A Disease of Inequality

We heard about the moral dilemma because polio is a disease of marginalisation and inequality. There’s the difficulty of investing millions in the vaccination for one disease when there are cases of diarrhoea and malnutrition, and poor water supplies and sanitation. The government and Rotary and other organisations are supporting improvements in water supply and in initiatives such as solar filtration systems. There is a shift towards an integration of the polio programme with other services.

Abdi spoke about the amazing work conducted by Rotarian volunteers in Pakistan, led by Aziz Memon, chair of Rotary’s Pakistan PolioPlus Committee. Aziz is a successful businessman, but has also led on advocacy and built good relationships with many politicians. Rotary also funds billboards across all the major bus stations & railways. Rotarians have been in the frontline and it hasn’t been easy to push the polio agenda in a difficult economic climate.

“I really want to take this time to appreciate the excellent work of Aziz Memon and the Rotarians of Pakistan.”

Rotary is seen as a local organisation, so when some communities have viewed the vaccinations with suspicion, sometimes as a ‘western evil’ there is no suggestion that Rotary is linked to this. Similarly, the army is viewed with respect and so when the army has been involved in vaccinations, providing security support for health workers, this has helped improve community acceptance.

The UK has recently lost its measles-free status. Again, this is in part linked to anti-vac campaigners using social media: the anti-vac lobby is small but loud. Abdi was asked what he thought of the proposal from one UK politician, that children might be excluded from school or parents might be fined if their children have not received the measles vaccination. Did Abdi think that would work? No, “it will backfire, very badly”. He suggested that winning the trust of a community is the only way to increase vaccinations and that any coercion will always backfire. The programme teams have to listen more and talk less and build up the trust.

So just a few days before World Polio Day, the members of the audience were reminded yet again of the importance of Rotary’s global campaign and of our partnership with organisations such as the World Health Organisation, and that it really is possible for us to eradicate this disease from the planet, but that there’s still a lot of work to do. 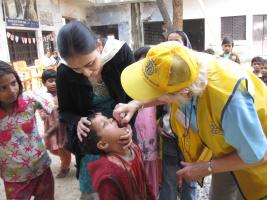 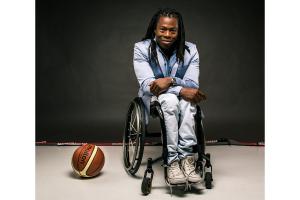