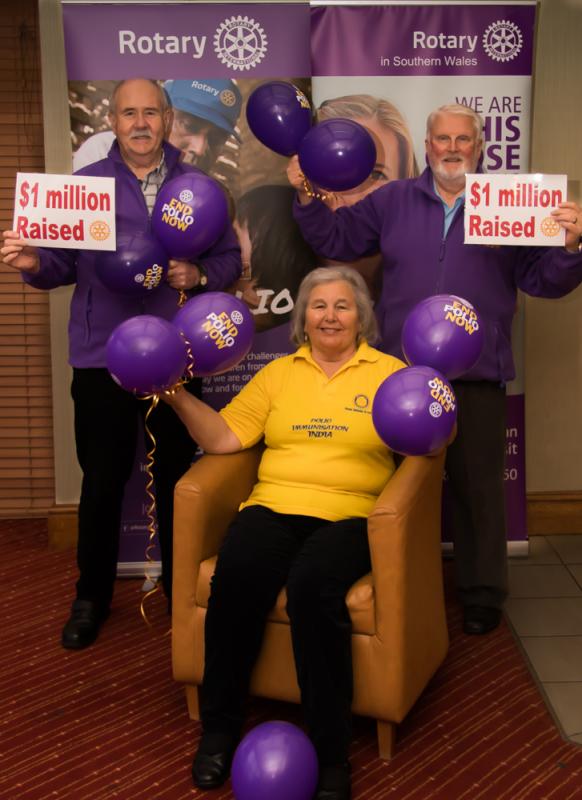 The money raised is specifically towards polio eradication and is in addition to the many thousands of pounds Rotary Clubs raise for local and international projects each year.

In Aberystwyth Arts Centre a film by award-winning documentary film-maker Tom Roberts is being screened on the eve of World Rotary Day, (22 February).  “Every Last Child” was commissioned by the Bill and Melinda Gates Foundation and the Crown Prince of Abu Dhabi to highlight the need to support Rotary in its aim to eradicate Polio in Pakistan

South Wales District Governor Peter Hamilton said, “I am delighted that we have reached this significant milestone in the history of Rotary in South Wales.

Since the inception of our campaign to eradicate Polio in 1985 Rotarians in this District have donated $1Million to this cause. This amount excludes any matching money from the Bill and Melinda Gates Foundation.  It has all been our money”.

“I would therefore like to take this moment to pay tribute to all our members, past and present, who have worked tirelessly for this cause over the years and to say how proud we should be of our achievement, which has helped to reduce new cases of polio by 99.9%.”

Not only does Rotary in South Wales raise money and awareness for this cause, but many of its members volunteer their own time to go to India and take part in the annual National Immunisation Day.

Swansea GP Dr Mair Williams is well aware of what a devastating illness Polio can be.  She contracted the disease as a child in Ystradgynlais, Swansea, and even spent time in an iron lung to help with her breathing.  It prompted her to follow a medical career and research the disease.  As a Rotarian, she has also taken part in National Immunisation Days in India.

“The recent Coronavirus has demonstrated how quickly a disease can spread when it is just a plane ride away.  Until we eradicate Polio there is always a danger it can return,” she says

Merthyr Tydfil Rotarian Subrahmanyam Ganesh has taken part in National Immunisation Days in India on three occasions.  He recalls a trip to Mysore in South India.

“We spent the day visiting about 12 different booths, spending a short time at each, talking to the volunteers and the parents and administering the vaccine to a few children.”

He adds. “Rotarians around the world have been involved in storage, transport and delivery of the vaccine to places, which no other agency has been able to reach. They have taken part in vaccination programmes personally in many countries.  Rotarians have been successful in arranging for periods of truce between fighting factions in areas of war and civil conflict so that vaccination programmes could be conducted in those areas.”