Since 1985, Rotary’s key humanitarian priority has been to rid the world of polio.


Rotary spearheaded the campaign at a time when there were over 1,000 polio cases a day in 125 countries, paralysing and even killing children.

Over the last 35 years, Rotary members, working with communities around the world, have contributed more than US$2.1 billion and countless volunteer hours to the fight to end polio.

Inspired in part by Rotary’s volunteer commitment and fundraising success, the Global Polio Eradication Initiative (GPEI) was launched in 1988.

This remarkable partnership which includes Rotary, World Health Organization, UNICEF, the US Center for Disease Control & Prevention and, more recently, the Bill & Melinda Gates Foundation and GAVI the Vaccine Alliance. These organisations work alongside governments of the world to end polio.

Despite there only being a handful of cases left in the world, continued campaigning, health worker training and vaccination programmes are essential to stop the disease returning and ensuring the world is certified polio-free. Over 400 million children still have to receive their polio vaccinations by the GPEI partners multiple times every single year in more than 50 countries.

Rotary members continue to be key players in many aspects of the polio programme including on the ground in a number of countries as well as fundraising and advocacy.

Find out more about End Polio Now and about the Rotary Great Britain & Ireland Purple4Polio campaign. 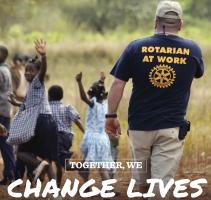 The Rotary Foundation (Rotary's own charity)

back The Rotary Foundation is Rotary’s own and only charity delivering our vision of a better world.