Pangbourne Rotary Club members Richard Anderson, Rohit Tanna, Clive Williams and Mark Woodruff have led initiatives to help the Afghan community who are being housed by the Home Office in a local hotel, until permanent homes can be found for them.

Firstly, Richard and Rohit helped support Qais Rahmani (who after passing out from Sandhurst could not return to Afghanistan) by working with the Home Office to find Qais accommodation at the hotel, where several Afghan families are based. Richard has brought Qais to several of our events and meetings.

Secondly, Mark and his family engaged with the Afghan community and collected unwanted toys, scooters and bikes for the children.

Thirdly, Mark and Clive arranged a 7-a -side football match between Mark’s Friday night team and the Afghan All Stars. Duly kitted out by Pangbourne Rotary Club (organised by Quartermaster Clive) the team (managed by Qais) embarked on what turned out to be a memorable and fun afternoon on a fine a Sunday afternoon in January. 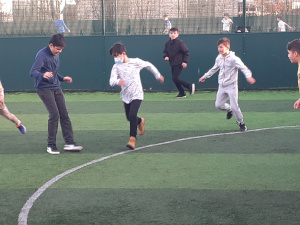 The two Brians (transport manager, Brian Jenkins and snapper, Brian Davies) together with Clive and Rohit were in attendance -unfortunately Richard and Mark were unable to attend.

Our match reporter (it was a game of two halves, Brian) states that it was an exciting contest with the wily Reading Old Boys aka Mark’s Friday night team up against the energetic Afghan All-Stars. It was a tight game with the All-Stars playing catch-up until virtually the last kick when they netted a well-deserved equaliser. 3- 3 was a fair result. Or was it 3-4? The score was irrelevant as a great time was had by all-both teams and the 10 or so supporters of the All-Stars -including some younger members who had a great time kicking around themselves.

The Reading team volunteered to play us again, such was the fun and enjoyment. “Bring it on” was the response from the All-Stars.

It was delightful to hear the reaction of the players and the youngsters afterwards.

The gratitude of all and sparking eyes of the youngsters-many of whom had great English after 5 months in the UK was a joy to behold.

More games are planned and other social events are in the pipeline.