The first meeting of the Club was in November 1922 and the Club received its Charter on 26th February 1924. There were 20 members at the start, in the 1990's membership almost reached 100, but has dropped since then through changing work practices and the decline of private businesses in Oxford City, and is now 59 strong. The Club's first lunch meetings were held at the Clarendon Hotel, where the Clarendon centre is now. They continued there until December 1939, when the hotel was purchased by F W Woolworth for a new store. The Club moved to the Randolph Hotel and has remained there ever since. On a historical note about the price of their lunch; 3/6p in 1922, 3/3p in 1949, 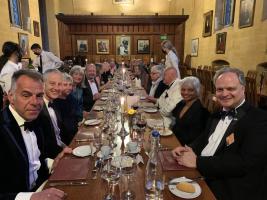