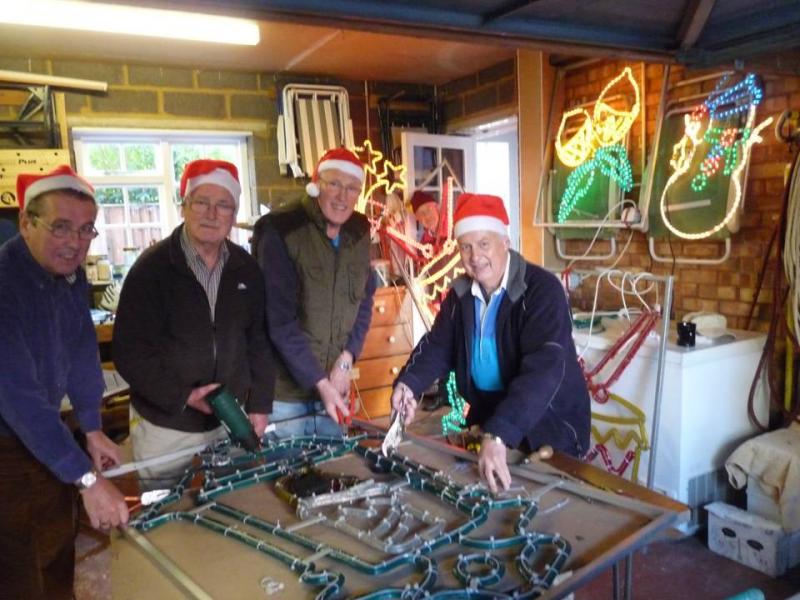 Santa's Helpers Get Ready For Christmas

Since 1978 Baldock Rotary have been lighting up Baldock at Christmas. The cold, snow, ice and wind of the last couple of winters have, taken their toll.  Last Christmas around half the Rotary Christmas lights for Baldock were broken.  To simply replace them would have cost over £9,000 but we have always been thrifty and able to do this for a fraction of the cost of other towns.

Clearly the Club could not find this kind of money in these difficult times.  Unperturbed and after much head scratching we have worked out a plan to undertake to repair them ourselves with some willing volunteers!!

As you see Santa's little helpers toiled away in his factory for many days.  It proved to be slow, painstaking work as each decoration has about 3,000 bulbs and there were 21 panels to repair!!  With only a month to go, much hard work laid ahead but their persistence paid off and Baldock was lit up for Christmas as usual!

Our Christmas lights team have been responsible for ensuring that Christmas in Baldock has that extra special appeal to residents and visitors during the festive season. They liaise with local businesses and the Town Council to maximise their contribution to the event.

This is a huge task that has been undertaken by Rotarians with support from the 41 Club as well as friends and sometimes Rotarians from other Clubs.