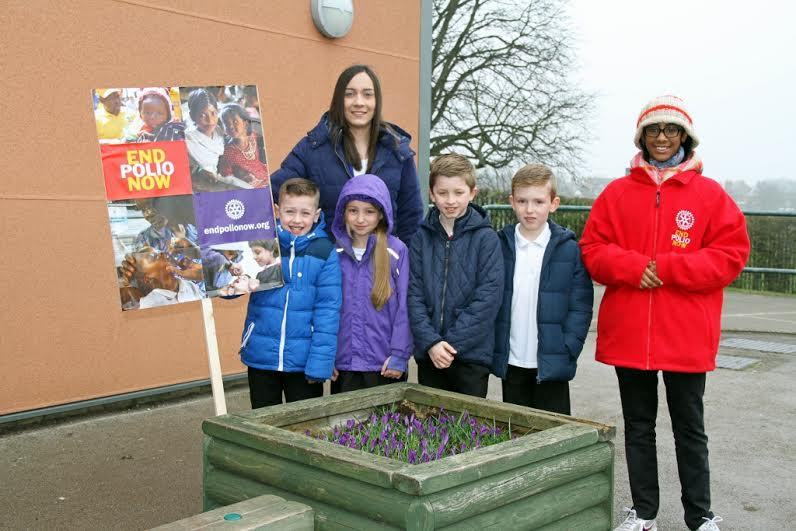 To eradicate polio, Rotarians have mobilized by the hundreds of thousands. They're working to ensure that children are immunized against this crippling disease and that surveillance is strong despite the poor infrastructure, extreme poverty, and civil strife of many countries. Since the PolioPlus program's inception in 1985, more than two billion children have received the oral polio vaccine.

Rotary's US$200 Million Challenge is the Rotary Foundation's response to the two grants totaling $355 million from the Bill & Melinda Gates Foundation to help eradicate polio. Every dollar given to PolioPlus will be counted toward the $200 million match, which must be completed by 30 June 2012.

Diaster Recovery Allows Rotarians to donate money in response to specific disasters. Funds are distributed to local committees to support recovery efforts. The program was created in 2005-06, and the Foundation currently administers four Disaster Recovery accounts: Hurricanes Stan and Wilma (Guatemala and Mexico), Hurricane Wilma (United States), the Earthquake in India and Pakistan, and Solidarity in South Asia. Total contributions to the accounts were $6.4 million.

Support the service activities of districts locally and abroad.

Provide matching funds for the international service projects of Rotary clubs and districts.

The Foundation sponsors one of the largest international scholarship programs in the world. Scholars study in a different country, where they serve as unofficial ambassadors of goodwill. Since 1947, more than 47,000 scholars from 110 countries have received scholarships of more than $476 million through The Rotary Foundation.

Annual awards are made to paired Rotary districts to cover travel expenses for a team of non-Rotarians from a variety of professions. Rotarian hosts organize a four- to six-week itinerary of vocational, educational, and cultural points of interest. Since 1965, more than 57,000 individuals (almost 12,000 teams) from 100 countries have participated at a cost of more than $92 million.

Each year, up to 110 scholars are sponsored to study at one of the seven Rotary Centers for International Studies in peace and conflict resolution for a master's-level degree.

For more information on all this progams visit: www.rotary.org