Extolling the virtues of attending a RYLA camp 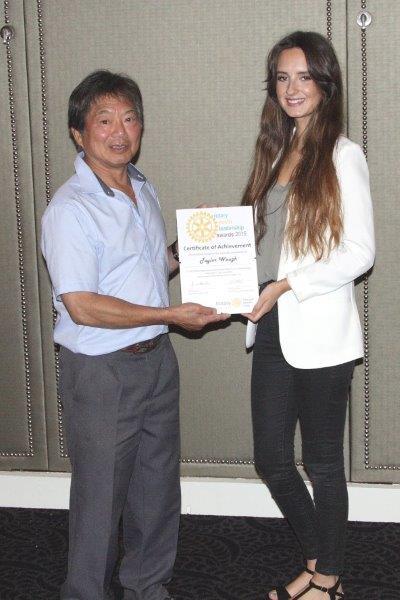 An eloquent young lady from Woodmill High School addressed the Club at its meeting on 8 September and made everyone sit up and pay attention and maybe inspired hearts to beat a little faster? Taylor Waugh attended the Rotary Youth Leadership Camp 2015 and described graphically how scared she felt when walking into a bunkroom of strangers at the camp. There was one very shy girl in tears already but that same girl eventually won the leadership award at the end of the week. Taylor was particularly worried about the physical challenges of high rock ascent and gorge canoeing in white water because she has never been an outdoor person. However, she challenged herself, along with all the other girls, to conquer fear and build confidence within. Indeed, Taylor came to act as a helper for a deaf girl who could not hear the instructions for the many new sports and activities. Benefits derived from her week included positive thinking, communication, leadership to stimulate the best performance from your team, taking risks for confidence building and problem solving. The group of girls have become firm friends and chat regularly since the course. Her parents and teachers have commented how much she changed after just one week.
Taylor, and other youngsters sponsored by Rotary may help  to inspire the unemployed 16 year olds on our Fife College project.

Sandy Wise, deputy head at Woodmill, was a guest of the Club and offerred moral support for Taylor. Other guests were Jim Gillies, CEO of Aonich Technologies and Dan Moriarty a Rotarian from Irvine Sands.

The picture shows Taylor receiving her certificate from President Alex