Tim will tell us about the exciting projects that are being developed in Foleshill including the setting up of a Job Club and a Food Bank. 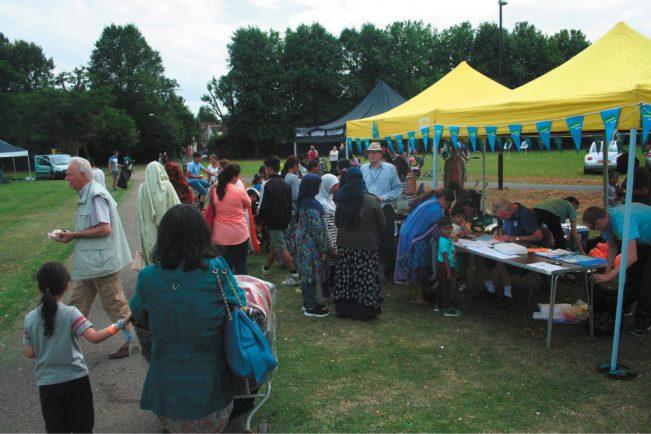 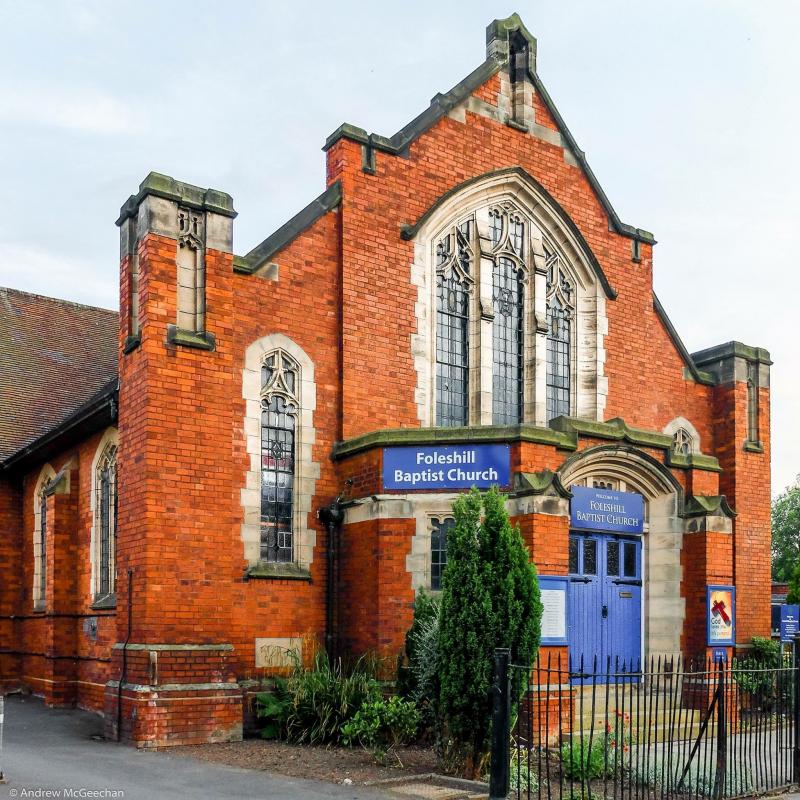 Foleshill is a neighbourhood lying to the north of Coventry City Centre, on both sides of Foleshill Road (the A444) and Stoney Stanton Road. Historically the neighbourhood was larger and more important, covering an area that extended as far as Bedworth and having its own council (Foleshill Rural District Council) until it was absorbed into Coventry in 1932.

The centre of the historic district of Foleshill was St. Lawrence’s Church on Old Church Road, now regarded as being in Bell Green. Somewhere in this location was a hill where ancient people met, giving rise to its name “The Folk’s Hill”.

The district was one of heathland with open fields and scattered hamlets. The names Broad Heath, Great Heath, Little Heath and The Parting of the Heaths reflect the original geography of the district, whilst Edgwick was the name of one of the open fields. From the second half of the 16th century scatted coal mines were developed, particularly in the north of the district and weaving was a cottage industry throughout the district.

Being outside of Coventry it was known for poverty and lawlessness. The situation was vividly described to a series of parliamentary committees in the early 19th century. In the report of 1840 one witness said that “the whole appearance of the single-hand weaving districts, and of their inhabitants” was “one of rudeness, poverty, and depression” and that “the lawlessness of the district” had “of late years much increased”. Foleshill was especially notorious for ignorance, immorality, and drunkenness: “the magistrates of Coventry well know that when a desperate case is brought before them it is generally from this neighbourhood”. Robbery of silk from the canal barges was particularly well organized; the thieves employed their own manufacturers and labourers, and had a warehouse and an agent.

A feature of the last decade of the ribbon-weaving industry in Foleshill was the development of cottage factories in which a row of cottages was served by a single steam engine. There are thought to have been 80 or 90 in Foleshill, including buildings in Edgwick Road and Stoney Stanton Road, which were still standing in the 1960s and 70s. The only ribbon weaving business to survive was the Cash brothers factory in Pridmore. Cash’s 100 houses were built on the banks of the canal and allowed weavers to live in the cottages below and work in the topshop above, powered by a rotating shaft that went through the whole terrace. The business survived through the production of woven name labels and is still operational today in the Tile Hill area of the city. The original topshops were restored and converted to social housing in the 1980s.

The construction of the Coventry Canal in 1768 and the railway in1850 made Foleshill an attractive area for the development of industry and the neighbourhood became the home of the important manufacturing industry of the city, including Alfred Herbert Ltd, Courtaulds, Riley, the Ordinance Works, J&J Cash, Webster and Bennett and Stirling Metals. Factories lived side by side with the growing residential population.

The neighbourhood was also known for brickmaking, using local clay that underlies the whole area. This lasted until the late 20th century with Webster Hemming Co making imperial sized semi engineering bricks that were very popular in the renovation industry. The brickworks chimney was recently demolished (2016) but the clay pits had previously been filled in and are now used as a local park.

In 1840 a 21 year old women named Mary Ann Evans moved with her father to Bird Grove in Foleshill. Her father was a sideman at St. Paul’s Church on Foleshill Road. While living here she met Charles and Cara Bray, a local ribbon manufacturer, who were known as “free thinkers”. At the Bray’s home she met a wide range of influential people and this social contact challenged her religious beliefs. She took up writing under the pseudonym George Eliot and wrote many famous books, including Middlemarch where Foleshill was described under the name of the weaving village of Tipton. Part of her home, in George Eliot Road, is a listed building, although having few of its original fittings.

The second half of the twenty’s century has seen the decline of industry in the neighbourhood, with large firms moving out (Courtaulds) or closing (Alfred Herbert’s). The population has changed too, with many people from the Commonwealth coming to live here. Foleshill is the city ward with the largest non-white population, approximately 40% in the 2001 census. Despite its high level of deprivation, Foleshill is a hotbed of energy and enterprise. 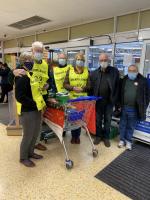 Coventry Jubilee Rotarians were delighted to support this years Food Bank Collection at Tesco in Canon Park. We had the opportunity to meet some fabulous people who donated both cash and goods to Coventry Food Bank. 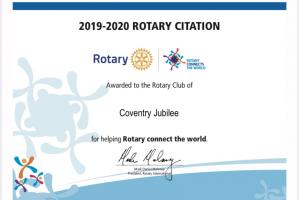 We were delighted to be awarded a Rotary Club Citation this year. It’s good to know that our work with Local, National and International Communities has been recognised.

We are working with the other four Coventry Rotary Club to support Coventry City of Culture. 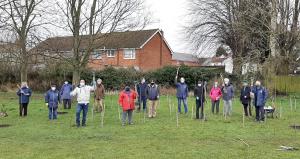 Throughout its existence, Coventry Jubilee has been active in projects which help the local community.

Through out the year we hold a wide variety of social events for our club members, family and friends. Many of these events are also fundraising events where the proceeds go to our chosen charities for the year. 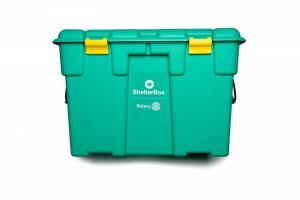 As part of an international humanitarian organisation, Coventry Jubilee has regularly been involved in humanitarian projects overseas.

Information on our memberships and how to join us.

Students, Staff, and of course Coventry Jubilee Rotarians had a Fantastic Day at The West Midlands Special Schools Sports Day at the Xcel Centre in Coventry.

​For many years Coventry Jubilee have supported young carers in Coventry and Warwickshire by sponsoring young carers to a week's break away at an activity centre in the summer holidays.

Jubilee News is our bi-monthly newsletter detailing our fundraising, community, international, social activities and speakers. Please click on the links below to read previous issues.