Local children are happy to help

Pupils from the schools are asked to fill boxes with items which will go to deprived children in eastern Europe in time for Christmas.

David Magilton, chairman of Turton Rotary's International Committee, said: "We had another a terrific response from the children and the schools. They love helping to give deprived children something to open at Christmas.”

The shoeboxes were heading to Romania and the Ukraine and the 220 from Turton will add to the 55,000 shoeboxes that have been already collected and delivered.

TURTON Rotary Club is celebrating another bumper year of donations after it raised £7,666 on its Christmas sleigh appeal.

The club, in conjunction with Bolton-le-Moors Rotary Club, had a busy time during the festive fundraiser, which ran for four weeks in the lead up to Christmas.

Father Christmas and his sleigh, with the help of snowmen, toured the streets of north Bolton, handing out sweets and collecting donations and also made appearances at local supermarkets, where shoppers gave generously.

Peter Gaskell, the club president, said: “I am delighted with the generous response from the people of Bolton.

“A lot of hard work goes into making sure the sleigh is operational, and our members give up their time generously, but it is all worthwhile when you see the look of joy on the children’s faces.

“It has been another successful year with donations more than £1600 higher than last year. I can assure everyone that every penny collected will go towards worthy charities.”

The president added: “Thanks must be given to supermarkets Morrisons at Harwood, Asda at Astley Bridge, and the Co-operative and Sainsbury's supermarkets and Greenhalgh's bakery at Bromley Cross for allowing us to collect at their stores.

“We must not forget to thank our colleagues at the Rotary Club of Bolton-le-Moors for their help and assistance in what has proved to be a very successful collaboration. The money will be split between a range of local good causes and rotary charities.

“We also want to thank organisations for their help during the appeal, including the RRG Toyota group, which provided a vehicle to tow the sleigh, and the Last Drop Hotel for the use of its facilities.”

The Christmas Sleigh Appeal has been in operation for more than 20 years and has raised more than £260,000.

Anyone who has seen what the Rotary Club of Turton do at Christmas with the sleigh collections, and like what they see, then there is an open invitation to come and visit the club. They meet each Thursday at the Last Drop at 6pm or visit our website at www.turtonrotaryclub.org.uk to find out more about what we are about.

TURTON Rotary Club's Christmas sleigh will be out and about North Bolton bringing Christmas cheer to children and adults alike.

Santa and his snowmen will once again tour the streets raising money for charity and the first outing is at Edgworth, on Friday, December 1, for the lights switch on.

President Peter Gaskell is hoping for another bumper year.

He said: "The sleigh is always popular as much with adults as the children. Our members, along with Bolton le Moors Rotary Club, will once again be on the streets and at local supermarkets raising money.

""The club's Christmas Sleigh Appeal has been in operation for many years, and we are very proud of the fact that nearly £280,000 has been raised in that time and we are hoping for another successful year.
"We must also thank RRG Bolton Toyota for the loan of their liveried car, plus local supermarkets Asda, Morrisons, Sainsbury's and the Co-op for allowing us to collect outside their stores."

When Santa and his sleigh will be in your area 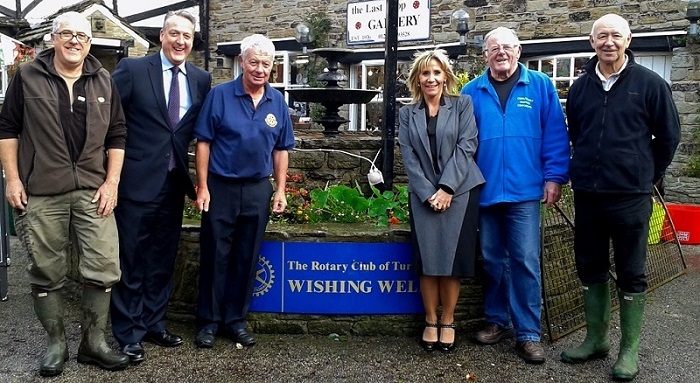 Turton Rotarians and managers at the Last Drop, Bromley Cross, are pictured in front of the charity wishing well which was cleaned and emptied and the collection raised £131.20. The well is situated in one of the forecourts of the hotel and has been a popular attraction and helped raise funds for many years.

Local children are happy to help

Pupils from the schools are asked to fill boxes with items which will go to deprived children in eastern Europe in time for Christmas.

David Magilton, chairman of Turton Rotary's International Committee, said: "We had another a terrific response from the children and the schools. They love helping to give deprived children something to open at Christmas.

"Many of the boxes were decorated with good wishes from the children and I am sure they will be well received by their counterparts, who for many, it will be their only present this Christmas." 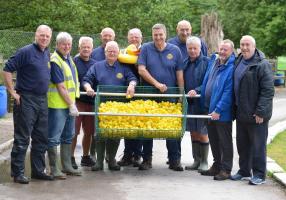