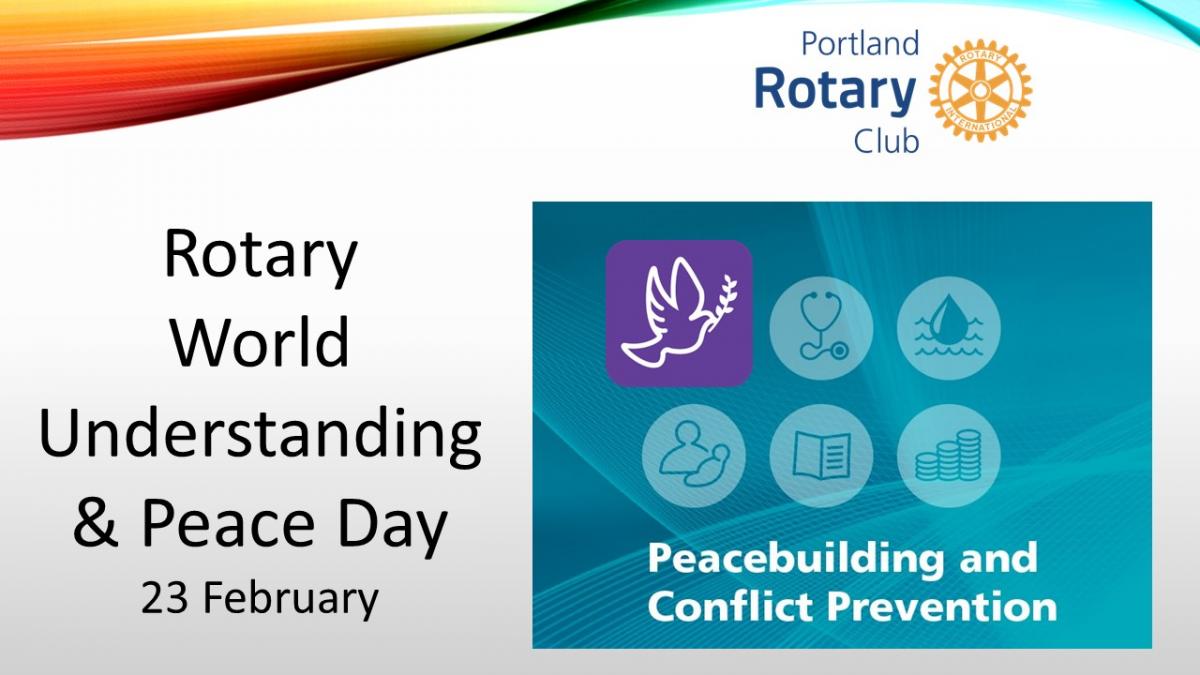 From Rotary action Group for Peace

“Whatever Rotary may mean to us, to the world it will be known by the results it achieves.”  – Paul Harris

World Peace and Understanding Day 2021 commemorates 116 years of Rotary International. On February 23, 1905, four men met in a downtown office building in Chicago, Illinois. The meeting was organized because Attorney Paul Harris wanted to create a professional group representing the friendly smiles and small-town values he had known in his youth. Harris, Gustavus Loehr, Silvestor Schiele, and Hiram Shorey decided to call their club Rotary, because their meeting locations would “Rotate.” The name Rotary International was officially adopted in 1922, as they encountered fellow professionals around the world who also craved friendly smiles and humanitarian values. Over a century later, World Peace and Understanding Day marks the founding of one of the largest philanthropic organizations in the world.

The founding Rotary club grew rapidly from its grassroots core in Chicago. The Rotary Club of Winnipeg, Canada, formed in 1910, and by 1922 Rotary clubs existed on six continents. Rotary quickly became international. Chicago businessman and Rotarian Herbert J. Taylor conceived the 4-Way Test in 1932, and it was adopted as a guiding writ by Rotary International in 1943. These 4 Rotary principles served to expand the organization into 1.2 million members, in nearly every country on earth, 114 years after the first Rotary club meeting.

Rotary International’s growing humanitarian mission would not go unnoticed by 20th-century world leaders. In fact, forty-nine Rotarians helped draft the United Nations Charter. Paul Harris and fellow Rotarians championed the UN as a viable alternative to war. “It is true that the way to war is a well-paved highway and that the way to peace is still a wilderness,” said Harris in 1949. Read the interview. Early Rotarians determined that Rotary International would remain a non-religious, non-political, non-partisan organization, bonded only by a simple creed: “service above self.”

Rotary clubs in Germany, Austria, Italy, Japan, and Spain were forced to disband during World War II. The humanitarian work of Rotary International was also banned in Indonesia in 1942 and 1961. Yet, Rotarians in each country continued the vision of meeting basic needs in their communities. The simple idea of professionals uniting for community service could not be extinguished. Today, Rotary International not only thrives in each of these countries, but defines successful modern philanthropic organizations globally.

Polio Plus, launched officially in 1979, became Rotary International’s assault on polio. Rotary clubs worldwide declared an outright eradication of this disease “in their lifetimes.” Literally, billions of Polio vaccines were ordered and distributed to medical professionals around the world.

Global cases of polio were reduced by 99.9% and over 2.5 billion children have been vaccinated since Rotarians began this project. Words like, “modern philanthropic miracle” have even been uttered by celebrity professionals such as Bill Gates. The Bill and Melinda Gates Foundation joined Rotary International’s efforts to End Polio Now with a pledge of roughly $500 million in matching funds.

Ending polio is Rotary International’s most famous humanitarian effort. Rotary International and its 1.2 million members in over 33,000 Rotary club’s around the globe, also engage in six specific areas of philanthropic focus. These include: Disease Prevention and Treatment, Water and Sanitation, Maternal and Child Health, Basic Education and Literacy, Economic and Community Development, and Peace and Conflict Prevention/Resolution.