The Speaker was Melanie Gibson-Barton. See report below. 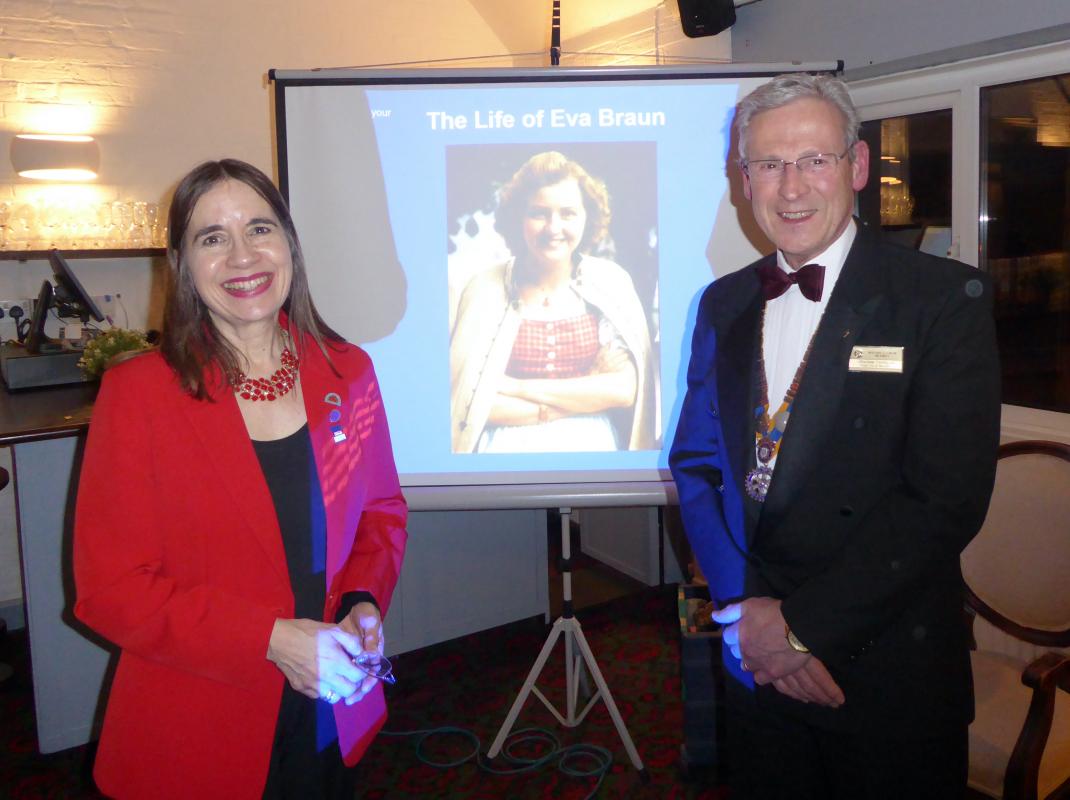 The Life of Eva Braun

Melanie stared by posing the question of whether Eva Braun was a victim or a contriver. She started by giving us a taste of Eva’s background. Her parents had a stormy and unhappy relationship, in fact they divorced at one stage before remarrying.  She had two sisters, one older and one younger, and was born near Munich. Her school days were not auspicious as she was reported to be a difficult child; however, she was athletic and a keen skier. At 17 she dropped out of school and went to work for in a photographic shop belonging to Heinrich Hoffmann.

Here she met Hitler who was a friend of Hoffman. She was 17 years old and Hitler was 40. He took her to restaurants and the cinema and even had her investigated but also had other interests, his work and his niece (Geli Raubal) who, together with her formidable mother, lived in Hitler’s large apartment until, possibly due to jealous insecurity, she shot herself with Hitler’s pistol.

Eva was obviously under Hitler’s spell as she stuck by him throughout his imprisonment and, as she didn’t have a telephone,  camped out in Herr Hoffman’s photographic shop so that she would be able to receive telephone calls. She was treated by him in a rather casual way and made an attempt at suicide after which he had a telephone installed at her parent’s apartment and started to be a little more attentive towards her.

In 1933 Hitler rose to power after promising to improve the living standards of the German people. This he paid for by seizing the assets of the Jews. Over this time Eva didn’t see so much of Hitler but continued to profit from their association. Hoffman became the official photographer and Eva was kept well in the background as Hitler wished to be portrayed as being married to Germany. This led to another suicide attempt, this time with tablets. Again, this prompted Hitler to become more solicitous and he provided Eva with a house and rooms at the Berghof, his mountain retreat. She stared to be seen in Hitler’s entourage although not standing with him despite his possible  dalliance with Unity Mitford in 1936.

At this time Hitler said he would like to retire to Linz with Eva to be an artist but she was still not allowed to attend meetings with visitors at the Berghof.

As World War 2  came Hitler was very busy but they shared the same bedroom at the Berghof and Eva staged ‘family’ photographs with him although was also very friendly with her brother-in-law, Fergelein.

As the war drew to it’s end Eva drove to Berlin for Hitler’s birthday on20th April,1945 and refused to go back to Berghof despite the bleak outlook for things. At last Hitler, now visibly sick and mentally fragile, married Eva, now aged 33, on 29th April.

They committed suicide the following day.