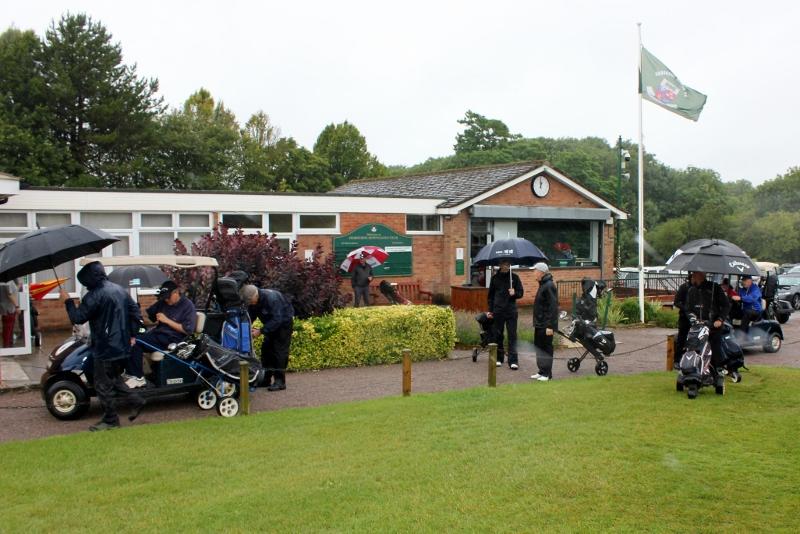 POSTPONED ON 7th JUNE DUE TO THE WEATHER - A SECOND ATTEMPT WAS MADE TO RUN IT ON TUESDAY 30th JULY.

But unfortunately on this second attempt the weather finally put paid to it. The shot gun to signal the start was fired at 1.15pm but just 30 minutes later drenched and bedraggled golfers were seen squelching and trudging their way back to the Clubhouse.  The heavens had opened, the greens were flooding and everyone was soaked to the skin.  Our 2019 Competition was called off.  But golfers are made of stern stuff and no British summer rain was going to dampen their spirits. They weren’t ready to go home. Dinner was brought forward to 3.15pm; the un-played for prizes were auctioned off, and the Heads and Tails and £5 note games were played.  Thanks to the competitors’ tremendous generosity over £3,850 was raised for the NSPCC Swindon Centre.

It's a Charity Golf Day sponsored by Simon Day & Co (Chartered Accountants Tel 01793 739184) and organised jointly by the Rotary Clubs of Swindon North and Swindon Thamesdown and promoted in aid of the NSPCC Swindon branch.   (In the picture above is last year's winning team).

It's an 18-hole Stableford Competition - entries invited from teams of four - shotgun start at 1pm - a minimum of 3 team prizes and 2 individual prizes to be won.

Play for the men from the Yellow Tees and for the ladies from the Red Tees.

Ladies will receive 2 courtesy strokes off the men's card.

The day ends with a dinner at 6pm and the presentation of prizes.

Ogbourne Downs Golf Course will be closed for the exclusive use of the Competition during the event.

Why not enter a team?

You are promised a most enjoyable and worthwhile day made even better in the knowledge that the proceeds will be going to charity.

All applications will be treated on a first come, first served basis.

Use the email contact link below if you need further information

All proceeds will go to the NSPCC Swindon branch

You can also sponsor a tee for £20 and have your name in front of all the players for the day.