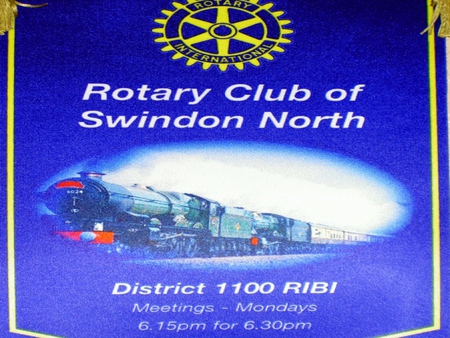 Celebrating the change of the Club's name to SWINDON NORTH, David Collett, the 1st President under the new name, designed a splendid new bannerette to replace the 40-year old "North Wiltshire" design.  Paying tribute to Swindon's railway heritage it pictures a Great Western Railway scene of some 60 years ago.

Steam engine buffs might like to know the story behind the picture.  The photograph used on the bannerette was taken as recently as 2005 at Bishopsteignton in Devon where the railway line runs alongside the Teign Estuary.  The train is "The Staite Pullman", which ran from London Victoria to Paignton on 28th February 2005. It was organised by the Venice Simplon Orient Express Company as a gesture to a Mr Bernard Staite who was retiring after a distinguished career in steam preservation.  From Taunton the train was doubled-headed by two GWR steam locomotives.  The lead engine is KING EDWARD I (No.6024) and it is assisted by BRADLEY MANOR (No.7802). The coaches are British Pullman carriages owned by VSOE.

KING EDWARD I (No.6024) was built in Swindon in 1930.  It was withdrawn from service in 1962 by which time it had clocked up over 1.5 million miles, many of which were at speeds in excess of 100 mph.  Having been preserved it is still in regular use and in 2008 it pulled a "Royal Train" carrying the Prince of Wales & the Duchess of Cornwall to the Severn Valley Railway.  C.B.Collett, the distinguished Chief Mechanical Engineer at Swindon Works (1922-1941), designed the extremely successful "King" class engines.  (Whether or not Rotary President David Collett is any relation is not known).

BRADLEY MANOR (No.7802) was built about 8 years later, also in Swindon.  It too has been preserved and was last used in March 2007.  Whilst in preservation it has travelled over 100,000 miles but its mainline certificate has now expired and it is unlikely to be used again.

Swindon (New Town) grew up around the GWR Works and workmen's cottages (the Railway Village) in the middle of the 19th Century on previously open land about one mile to the North of the small town on the hill, Swindon (this part is now known as Old Town).  At that time, Swindon was of lesser importance than the nearby towns of Highworth, Wootton Bassett, and Cricklade.

Today, the trains from Paddington to Wales and the West still stop at Swindon Station, but the GWR "Works" have long gone.  After years of uncertainty they finally closed in 1986 and the land on which they stood has been redeveloped and put to many different uses.  Thankfully, some of the old 19th Century factory and office buildings have been retained and restored and are Grade II listed buildings.

Worth a visit are -