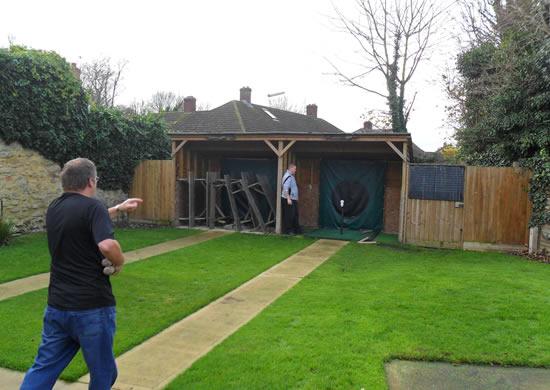 The fellowship supper meeting will take place at the Fox & Goat pub in Tiddington, Oxfordshire.

The rules on how to play Aunt Sally are described below.

Aunt Sally is a relative of the Skittles family. It is the most popular pub game in and around Oxford but much less well known elsewhere in England. Being a traditional pub game without any national governing body, variations of equipment and rules abound. Where there is doubt, locally played rules should always apply. These rules are based upon those of the Chipping Norton Invitation League - thanks goes to Edward Churchill for his assistance.

The basic objective of Aunt Sally is to knock a wooden skittle cleanly off the top of a post by throwing a stick at it. It's really that simple. The doll is shaped like a short squat skittle and should be about 5 inches high and 3¼ inches in diameter. It should be painted bright white.

The swivel is about 3 inches long and lies horizontally. At one end, there is a small round platform for the doll to sit upon. The other end fixes into the top of a post so that the arm can swing freely revolving around the post. The height of the post must be adjusted so that the base of the doll is 2 feet, 6 inches from the ground. Posts are usually metal - a 3/4 inch metal tube (as used for gas pipes) is an ideal post.

The sticks should measure 18 inches long and 2 inches in diameter and be made of hardwood. When each stick is thrown, the thrower must stand behind a wooden strip, the ochee, that is 2 inches high. The front of the ochee must be 30 feet from the base of the doll post. (1 metre = 100 cm = 3.28 feet)

A leg consists of each thrower throwing 6 sticks at the doll. Sticks must be thrown underarm. Each time the doll is knocked down, it is immediately re-seated for the next throw. The number of successful throws are counted and the person with the highest score wins the leg.

The critical rule in respect of scoring is that the doll must be struck cleanly. If the doll falls over because a stick strikes the post or the iron, this doesn't count. The only way to score a point is for the stick to hit the doll without touching any part of the iron or post.

A game is played over a number of legs. For a singles game, it might be the best of 5 legs. In singles, if the result at the end of a leg is a draw, one way to settle the leg is by sudden death - each player throws a stick until one player wins.

A league match would typically be contested by two teams, each team consisting of 8 people.

Each person from a team would play against a person from the other team so that 8 games are played and each player plays once. Alternatively, one side might throw first to set a total and then the other team throws to try to beat the total.

A game would consist of 3 legs each worth 2 points. In the event of a drawn leg each team will receive 1 point.

The captains shall toss a coin for each leg unless specified previously. The winning captain will decide whether to throw first or second.

Normally, after the 3 legs have been played there is a 4th leg commonly known as the "BEER LEG". The losing team of the 4th leg naturally are required to buy the opposition a pint.