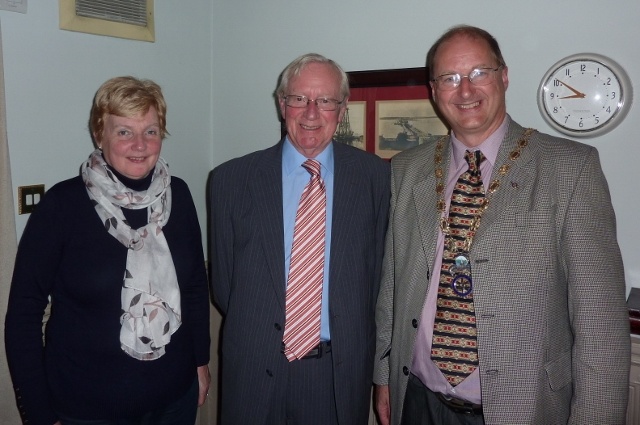 John Murphy of Queensferry Heritage Trust was the speaker at the Rotary Club of South Queensferry on Thursday 20th October. In an informative talk, John described the clubs origins in the concerns of local residents that the experience of the Forth Rail Bridge having achieved World Heritage Site Status should be a positive one for visitors and residents alike. Providing a positive visitor experience and an improved quality of life was the aim and founding a heritage trust seemed the way forward. A steering group, constitution and application for charitable status followed and in early 2015 the trust became operational. Its aims were to protect and improve the heritage and environment of Queensferry through public involvement and education and to represent these interests on such bodies as the Forth Rail Bridge Management Group and the Forth Rail Bridge Tourism Group. To broaden the aims of the Heritage Trust, John said he would personally favour the establishment of a community enterprise company. In its first year, in addition to lobbying for the protection of Queensferry's heritage, the Trust organised a wide-ranging series of talks and lectures which were well attended. An Open Buildings Day also proved popular. John thanked Rotarian Allan Smith for opening the First World War gunsite in the grounds of his home, The Forts, which drew a remarkable 400 visitors. Networking at the Queensferry Showcase event in Rosebery Hall, which attracted 36 local groups, resulted in the eventual realisation of the Vennel Play Park project. In summing up, John said that the community should be seeking to benefit from and influence the environmental, heritage and tourism prospects offered by the new Queensferry Crossing. In this respect, Fife was taking the initiative, while the City of Edinburgh Council had not attended any meetings. John Murphy's talk was well received and prompted many questions from the floor.