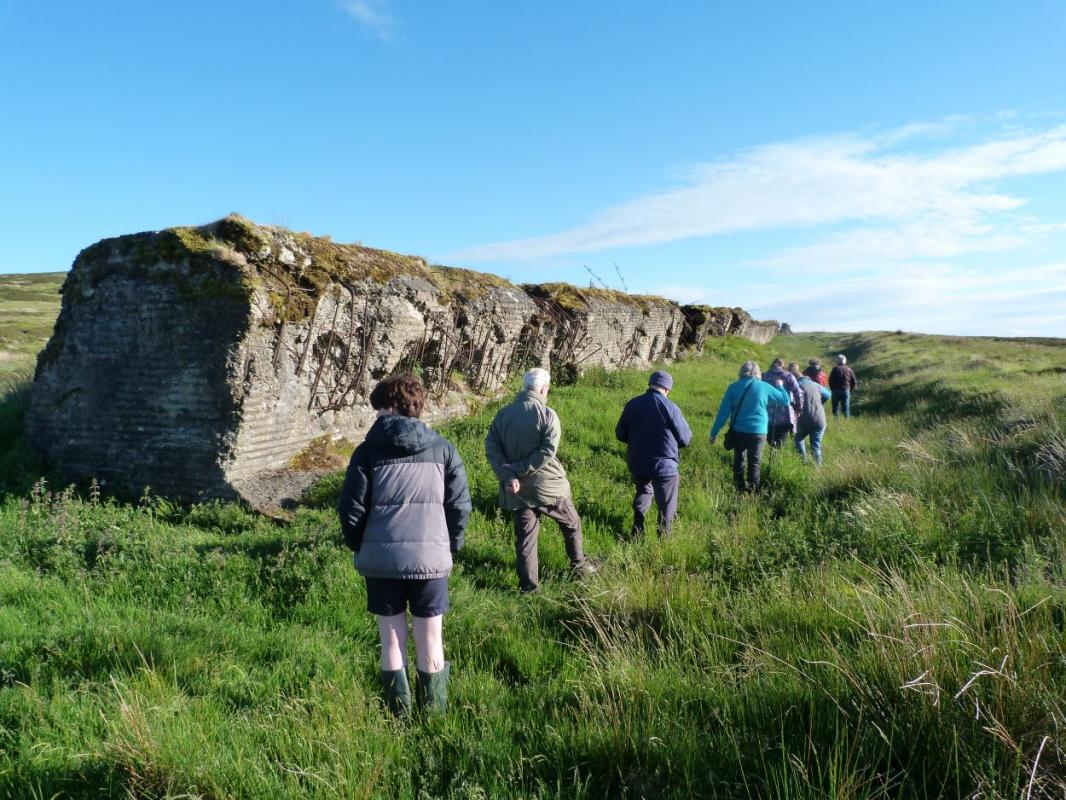 Partly obscured by grass, and not far from the site of the Battle of Sherrifmuir, the  replica Atlantic Wall is a potent reminder of the preparations undertaken for a much later conflict: the D-Day landing on the French coast in June 1944.  On Thursday, Murray Cooke, Stirling Council’s Archaeologist, gave the Club a detailed account of the thinking behind the construction of this Wall, built in a location far removed from where troops would begin their assault on the German forces.

The German Atlantic Wall was a massive defensive construction stretching from Norway to the Spanish border, built between 1942 and 1944, largely by slave labour, to give maximum defence against a possible coastal invasion by the Allies.  Fortunately, detailed plans of the Wall’s construction were stolen by the French Resistance from a German office and smuggled to Britain in a biscuit tin. These plans provided vital information about the design of the Wall that was constructed in heavily steel-reinforced concrete. To assess the strength of these defences, and to experiment with various means of breaching them, Britain built five replica Walls. The one at Sherrifmuir is the best preserved, and, Murray suggested, is a most important archaeological site for Scotland.

An Anti-Concrete Committee was established to assess ways of tackling the German defensive positions along the Wall.  It was particularly important to find ways of breaching the Wall so that tanks and troops could pass through. One method employed was the use of specially adapted tanks, designed by Major-General Hobart, carrying packs of explosives to be exploded on the Wall. These tanks were commonly known as “Hobart’s Funnies”.  Other less sophisticated ideas included the somewhat primitive idea of using explosive-filled knapsacks to be placed against the Wall.

The replica Wall was also used for training troops. It simulated the defences they would encounter on the French coast, and gave an opportunity to learn how best to overcome them.   To get as close as possible to the real experience, live ammunition was often used; in the process, one soldier was killed.

The outcome of all these preparations was rewarded on D-Day when 175,00 troops from 15 nations disembarked from 5,000 ships to begin the successful assault on the German Atlantic Wall.

President David Chisholm thanked Murray for an illuminating talk.  It was, he said, very interesting to learn more about this important site that was, essentially, on our doorstep.