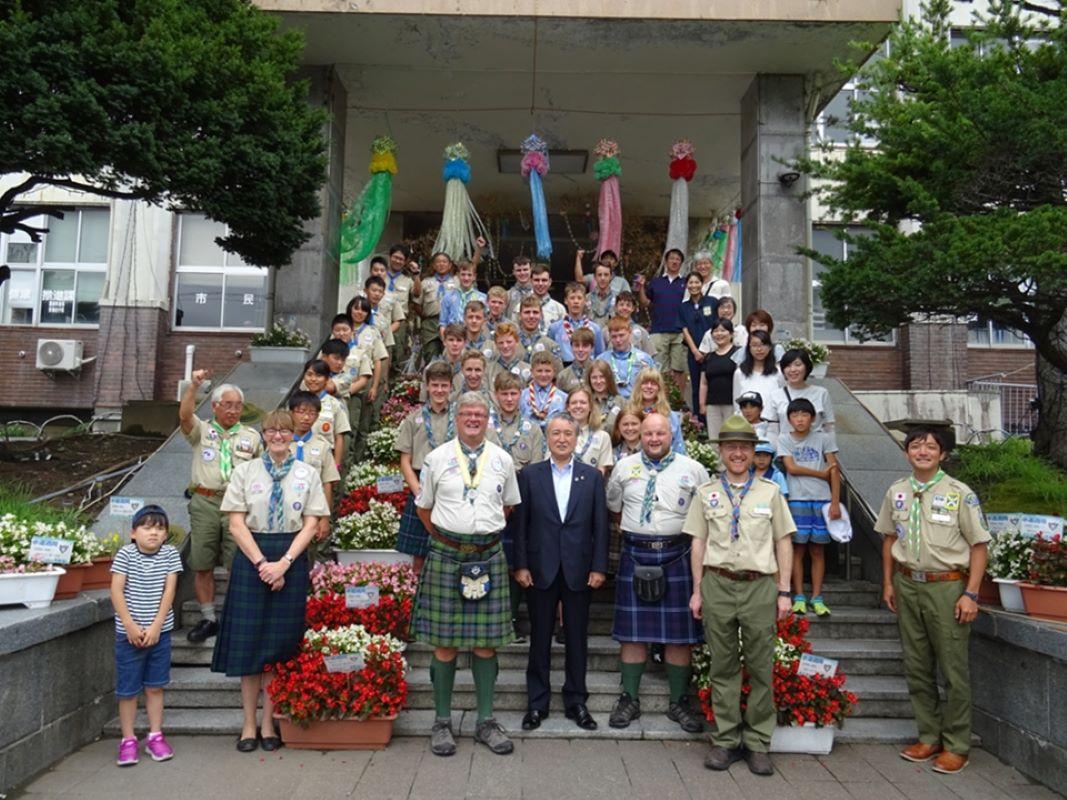 Speaking to the Club by Zoom, Callum Farquhar talked about a long-term relationship between scouts from Fife and scouts in the Iwate Prefecture on the north-eastern Pacific coast of Japan. Callum is an Explorer Scout leader and Regional Commissioner for East Scotland.  In last year’s Honours List he was awarded an OBE for his work with scouting, but also in recognition of the relationships forged with Japan.

Callum’s scouting link with Japan started in 1990 and has continued over the subsequent 30 years, involving not only visits by scouts from Fife to Japan but return visits by Japanese scouts to the biennial Blair Atholl Jamborette.  Callum sees the visits to Japan, which last three weeks, as important building blocks for scouts’ development in areas such as teamwork, building independence, and learning about another significant world culture.  Inevitably, the visits involve scouts in a major fundraising effort, itself an important learning process.

Given the location of the Prefecture, it suffered a significant impact from the tsunami of 2011 and this featured largely in Callum’s talk.  The undersea earthquake that gave rise to the tsunami was the largest ever recorded in Japan, and the fourth largest recorded in the world.  The waves triggered by the tsunami reached heights of some 40 metres, and travelled at speeds up to 400 miles per hour.  Being on the coast, Kamaishi, a town of some 90,000 inhabitants and a regular centre for the scouts’ visits, was particularly vulnerable. Despite having a two kilometre long breakwater completed in 2010, the town suffered major structural damage, with 1,250 deaths.  The loss of life would have been significantly higher had it not been for an initiative led by Professor Katada.  He convinced pupils that, in the event of a tsunami, they should make their own assessment of what to do rather than necessarily following the instructions of teachers – a significant shift away from the prevailing Japanese culture.  In the event, the young people followed his guidance and ran to higher ground while the normally safe higher levels in schools were engulfed by the mega-tsunami. Only the five young people who weren’t in school that day died. This escape came to known as “the miracle of Kamaishi”.

Following the tsunami, the Fife scouts have had subsequent visits to Kamaishi, and have followed with interest the steps taken to rebuild the town’s infrastructure, including the rebuilding of the breakwater, the raising of roadways and other important structures by as much as 10 to 15 metres, together with the reinstatement of commercial premises including the important fish markets.  On the site of one of the schools destroyed, a rugby pitch was built to house matches in the 2019 Rugby World Cup. The scouts have also raised funds for their Japanese friends to help their return to normality.

Callum concluded with an important message: ‘Scouting is all about that never-give-up spirit.  The important thing is to get on with it.’

President Andrew Hilley said he was most impressed by the extent of the Scouts’ relationship with Japan.  The talk gave a fascinating insight into the damage caused by the tsunami and the successful efforts to rebuild the area.