Speaker Meeting with partners, 6.45 for 7pm

Speaker: Gill Brain, Chairperson of Swindon U3A.
Gill will tell us what U3A in Swindon is all about 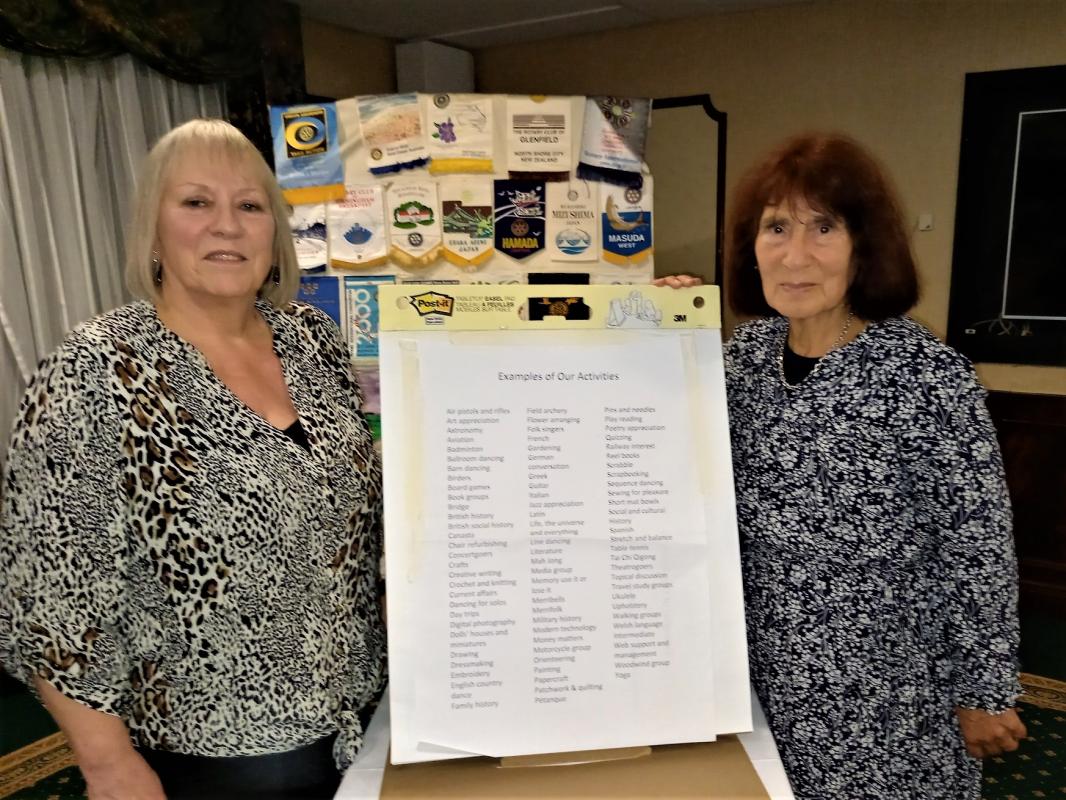 President Kathy welcomes our guest speaker, Gill Brain, Chairperson of Swindon U3A.  Gill brought with her a list of just some of the University of the Third Age groups that are available in the Swindon area.

Founded in 1982, the University of the Third Age (U3A) is a UK-wide movement of locally-run interest groups that aims to encourage groups of people in their third age to come together and continue their enjoyment of learning in subjects of interest to them.  From the start, the guiding principles were to promote lifelong learning through self-help interest groups covering a wide range of topics and activities as chosen by the members.

The 'third age' is defined by a time in life when there is the opportunity to undertake learning for its own sake. There is no minimum age, but it is particularly for people who are no longer in full-time employment or raising a family.  The founders envisaged a collaborative approach with peers learning from each other. The U3A movement is self-funded, with members not working towards qualifications but learning purely for pleasure. There would be no distinction between learners and teachers – everyone could take a turn at being both if they wished.

From its beginnings in 1981, the movement grew very quickly and by the early 1990s, a U3A was opening every fortnight.  At the end of 2016 the U3A movement reached the milestone of 1,000 U3A’s which was celebrated by a conference at which one of the speakers was Eric Midwinter – one of the founders of the U3A movement.  Today, there are 1,057 U3A’s with over 450,000 members.

It's all voluntary; a typical U3A will be home to many activity groups covering hundreds of different subjects - from art to zoology and everything inbetween.  The U3A national body – the Third Age Trust - looks after all the U3A’s in the UK, providing educational and administrative support.  The Trust is overseen by a Board of Directors, to which any U3A member can be elected.

In the Swindon Area, there are 2,500 members in about 180 groups.  They pay an annual fee of £35 and attendance at any group is free.  All the groups meet in the daytime; never in an evening.  Gill encouraged anyone of us who is interested in joining a group to visit the Swindon U3A website and/or come to the next Open Day which is on 23rd October at St Joseph’s College, Swindon, from 10am to 12.30pm