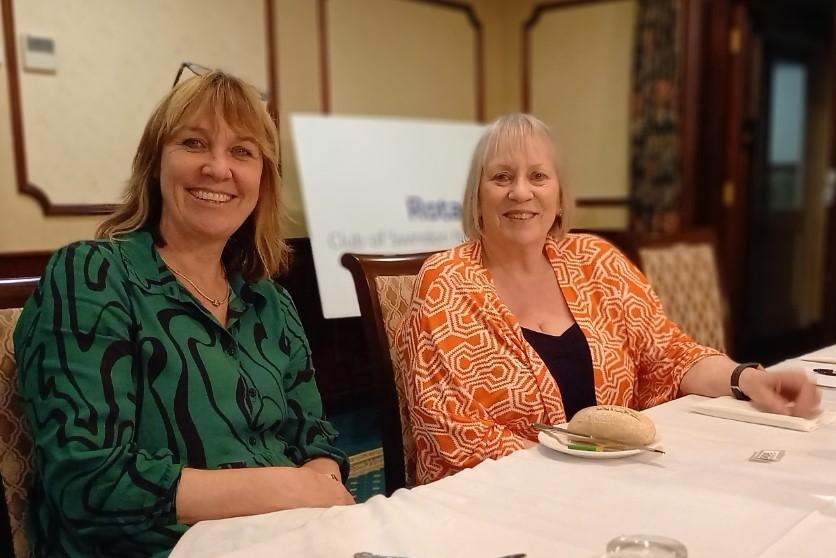 Our speaker at this meeting was Gill May (pictured above with Club President Kathy Hobson) who has worked for the NHS in both hospital and community environments since 1997.

In an excellent and fast-paced presentation, Gill explained that 1.9 million people live In her geographical area of responsibility.  There are 3 acute hospitals, 3 local authorities, 3 community providers, and 1 mental health provider, despite 180,000 people having some sort of mental health problem.  5.56% of the population has diabetes, 156,000 have 3 or more long-term health conditions, and 85,000 over the age of 65 are on 10 or more prescriptions.

Gill moved on to dealing with the Covid pandemic.  “In my 25 years with the NHS the last 2 years have been like no other,” she said.  “It was around December 2019 when we first heard about this virus in China but we sort of thought it would have no effect on us over here.  But within days we found we were dealing with a world-wide pandemic and the pace of change in the NHS in those first few months of 2020 was absolutely incredible.”

Some of the key challenges for Gill were having to increase the capacity of Intensive Care Units, staff working from home, cutting out most face-to-face meetings, increasing the space between beds in the hospitals for social distancing purposes and dealing with incorrect information in the social media.

In August 2020 the call came to make plans to vaccinate everyone and Gill led the team set up to do it.  In the space of 2 months 1,300 vaccinators were recruited and a mass vaccination centre at STEAM was in place.

Since then Gill’s team has administered 2,093,075 doses of vaccine and with 85% fully vaccinated the CCG is the second highest in the Country.  But, 53,000 people have either not taken up the vaccine or not come back for the booster which is a major concern.

During questions, it became apparent that another big concern is social care.  There are currently some 77 beds in the Great Western Hospital occupied by patients who no longer need be there but they cannot be discharged as the social care services do not have everything in place for them.  It is Gill’s opinion that social care should be taken in and be under the NHS umbrella.