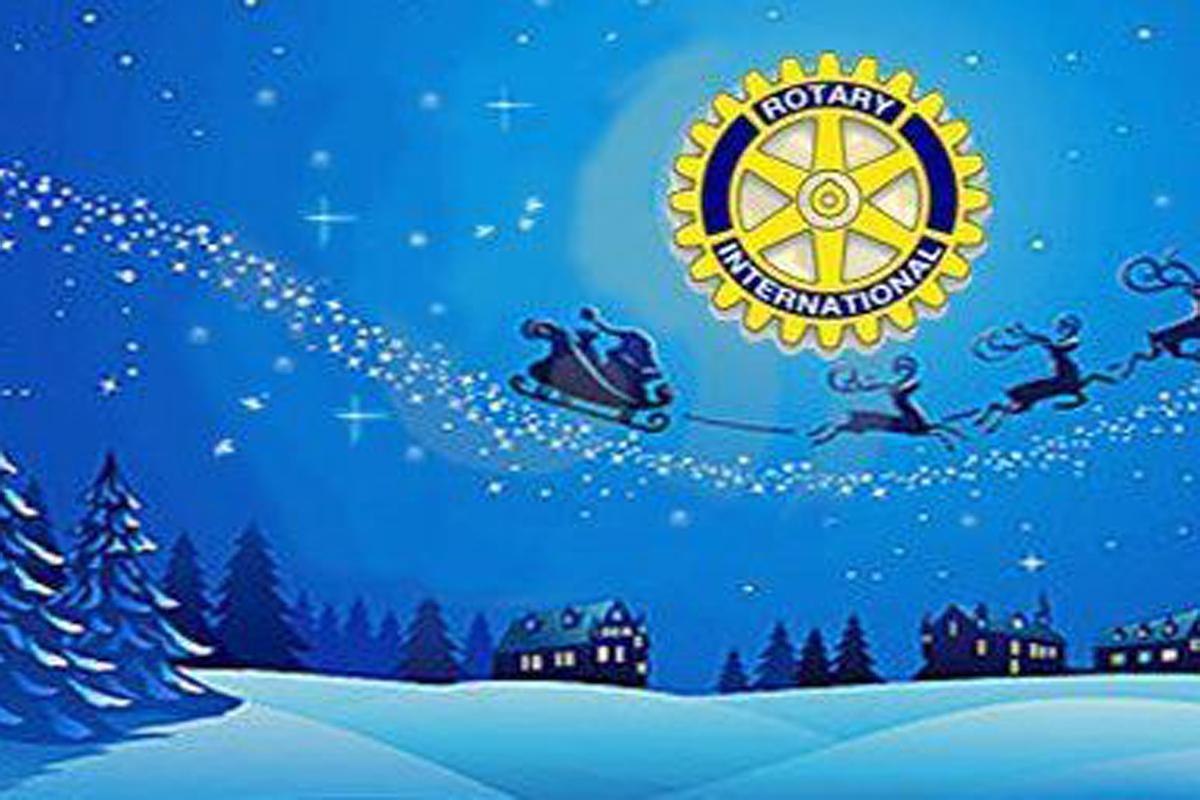 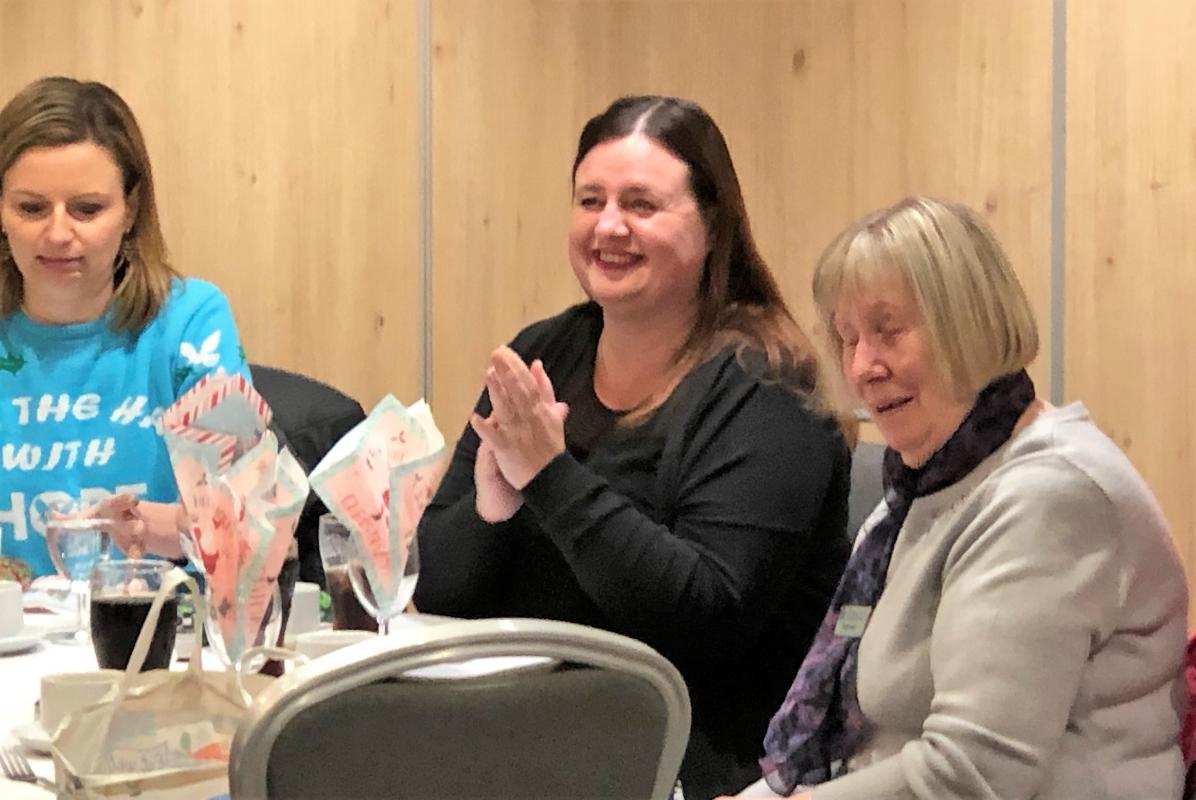 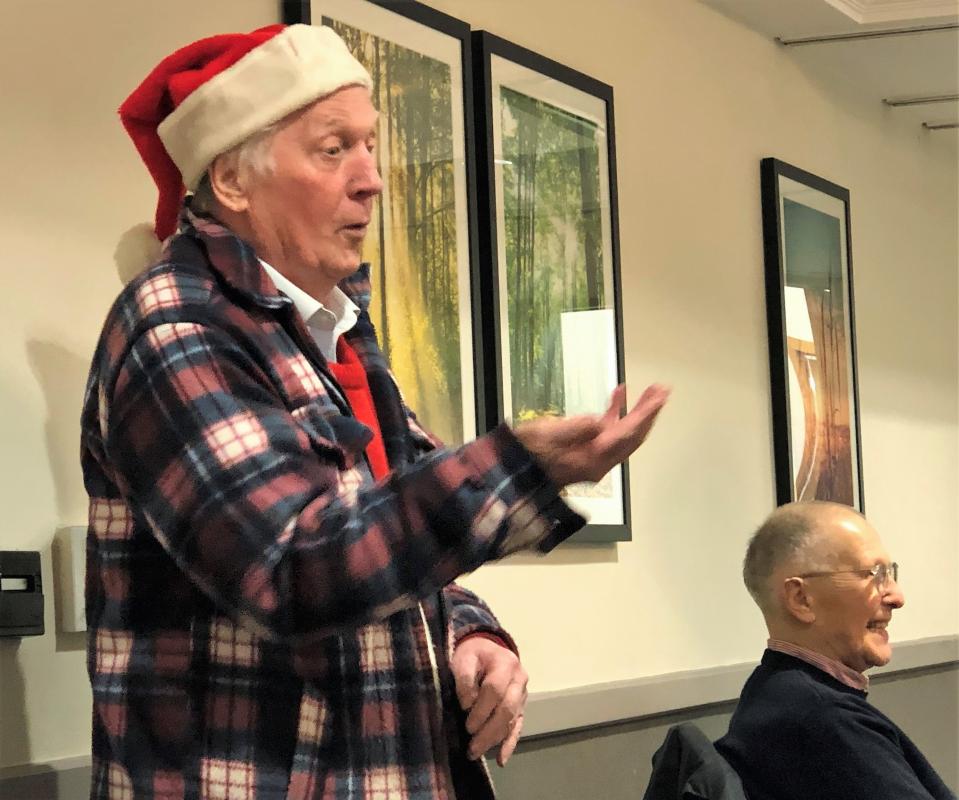 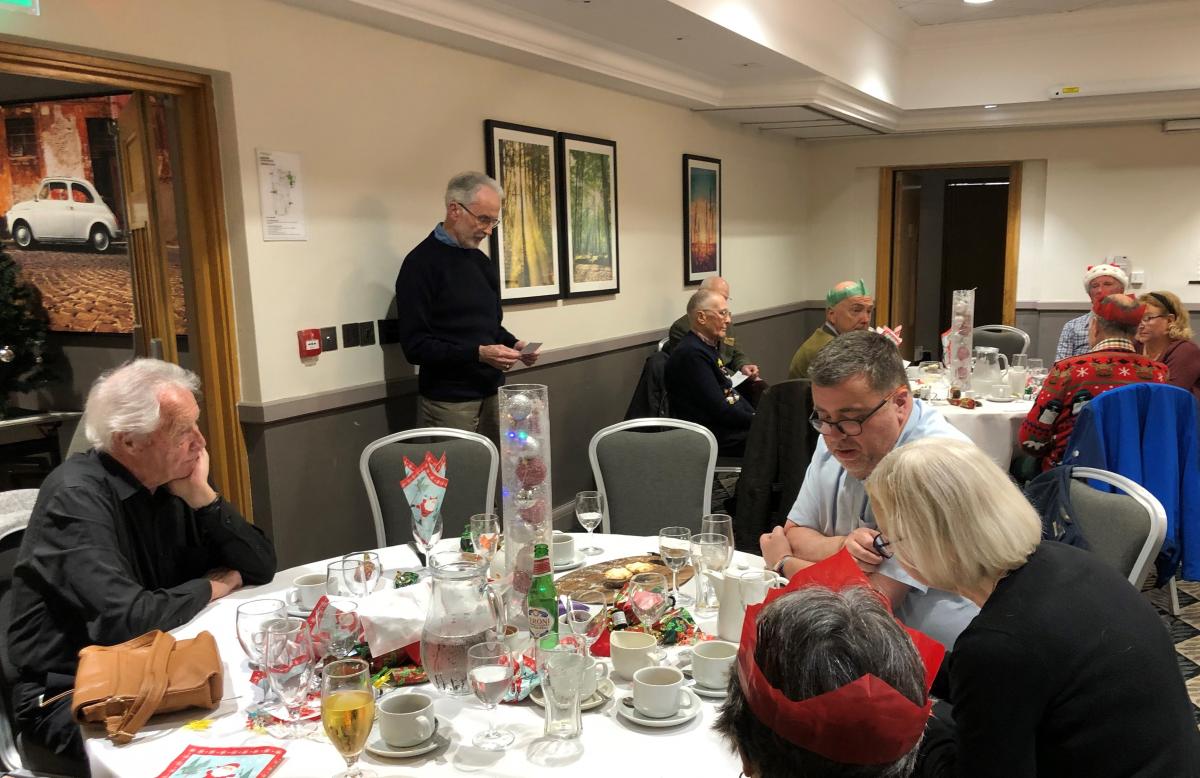 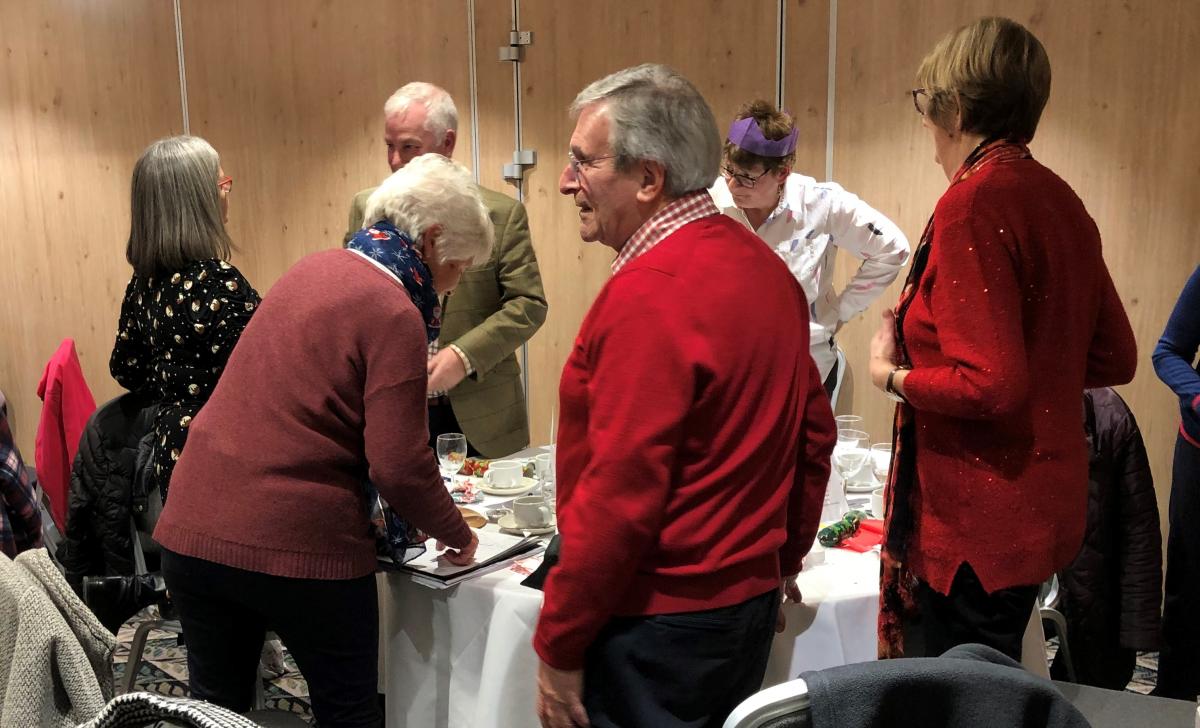 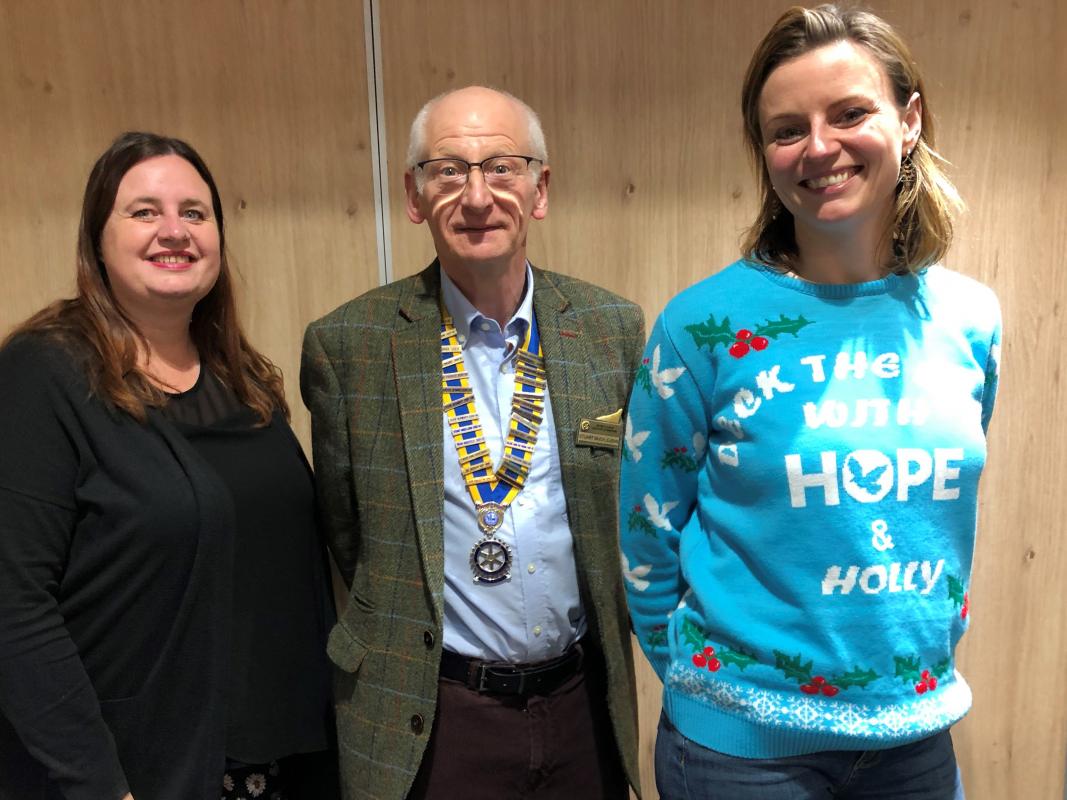 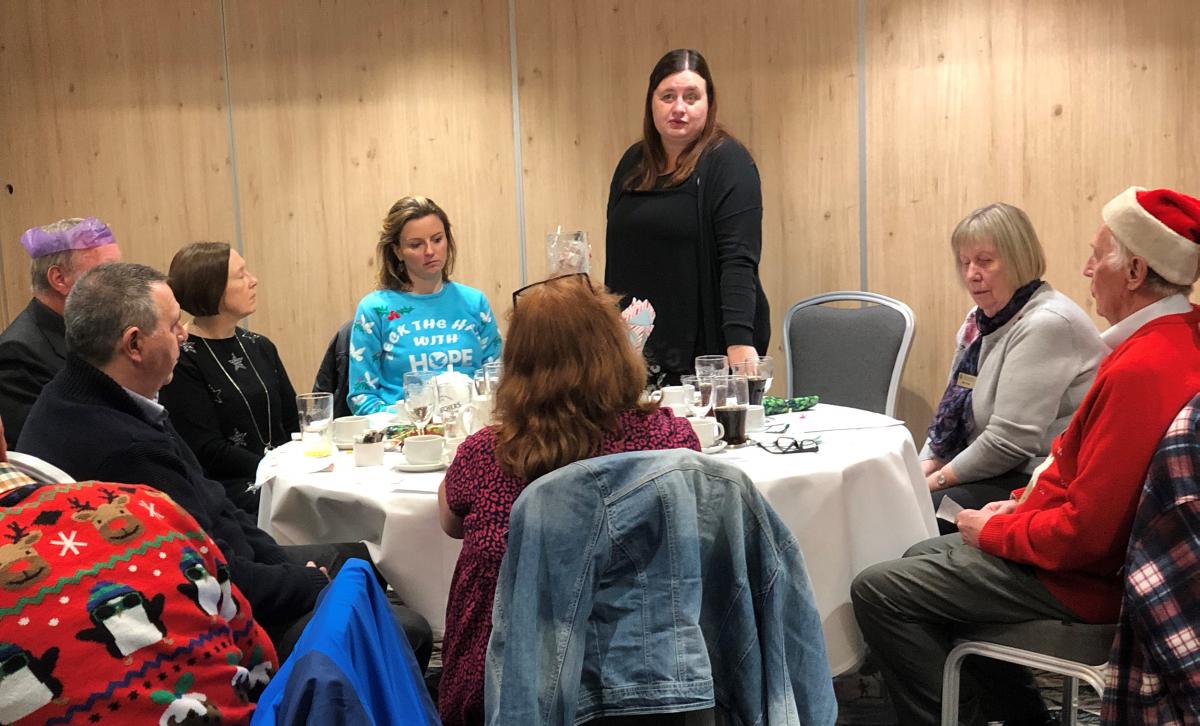 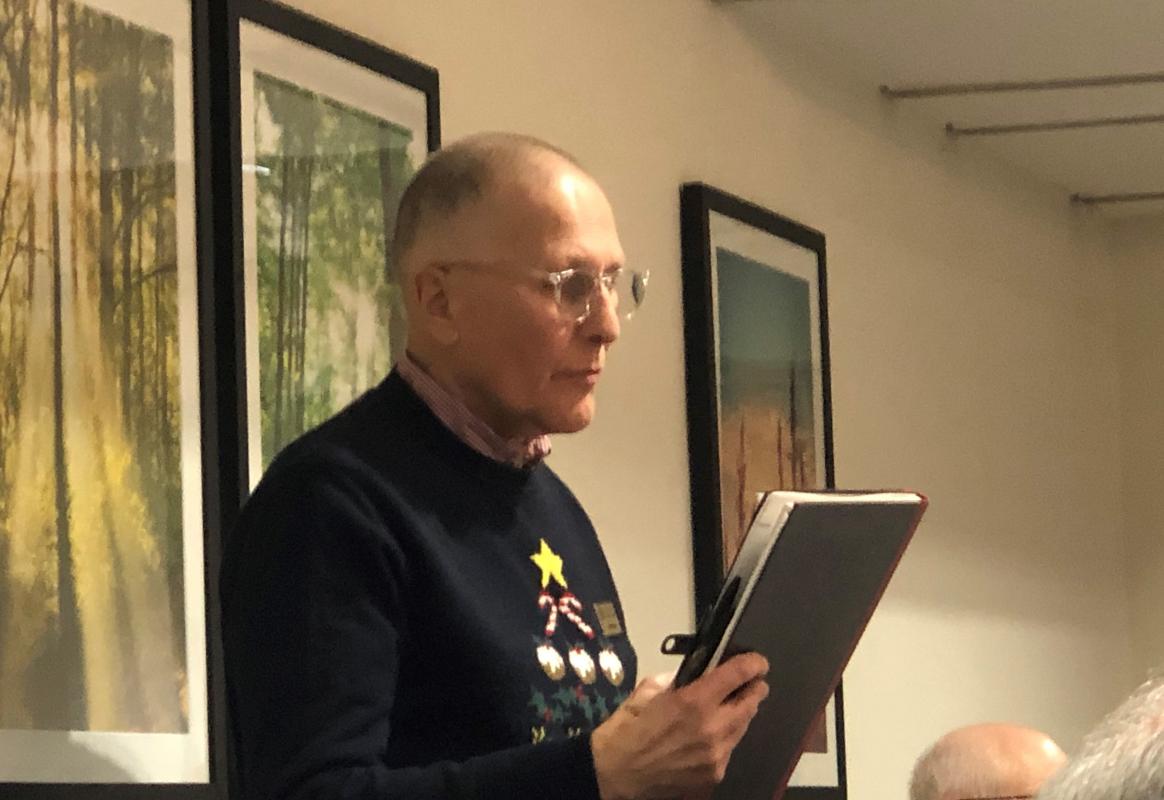 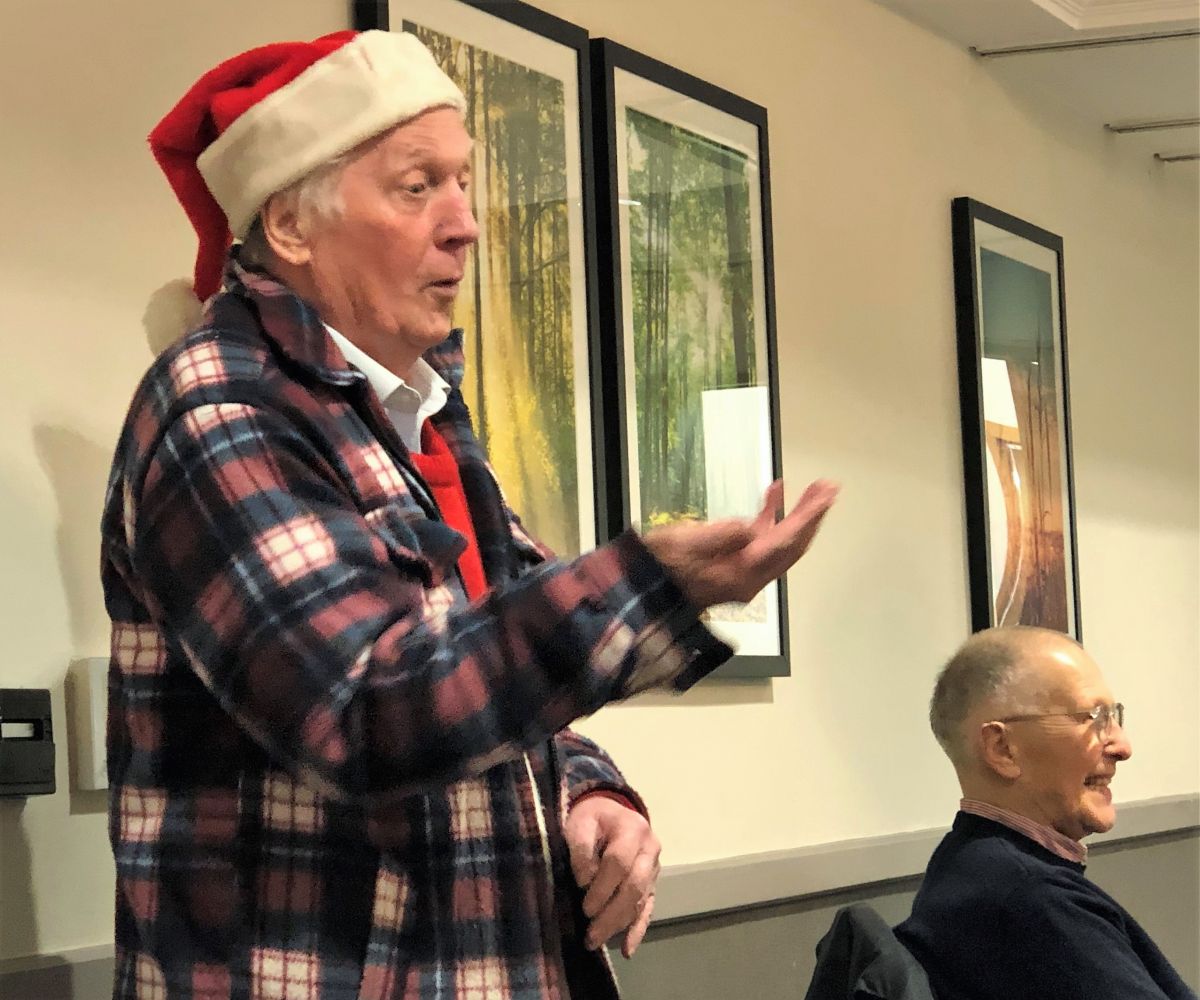 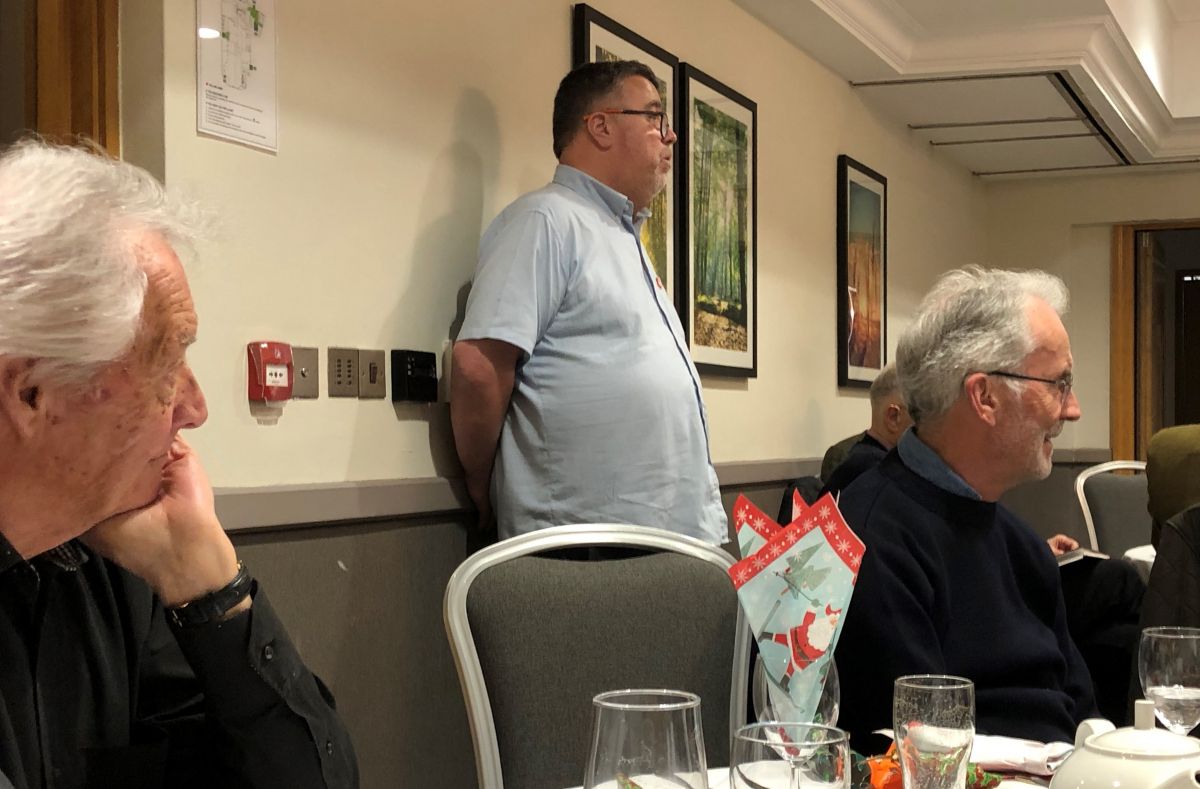 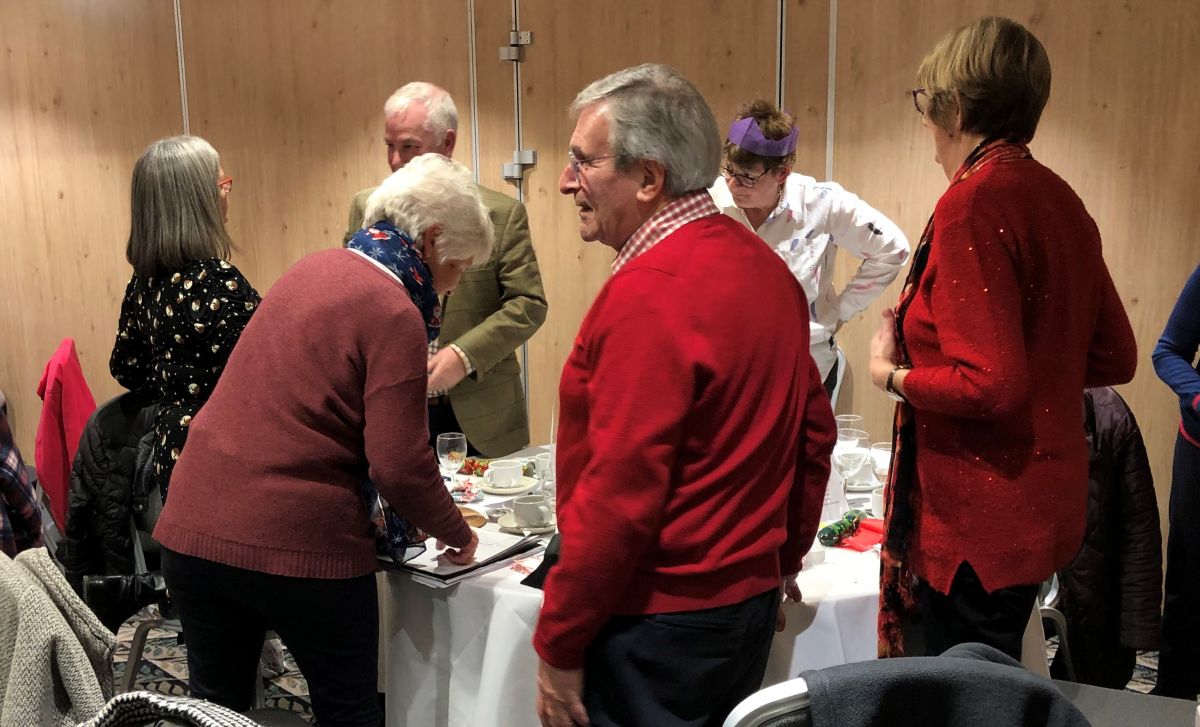 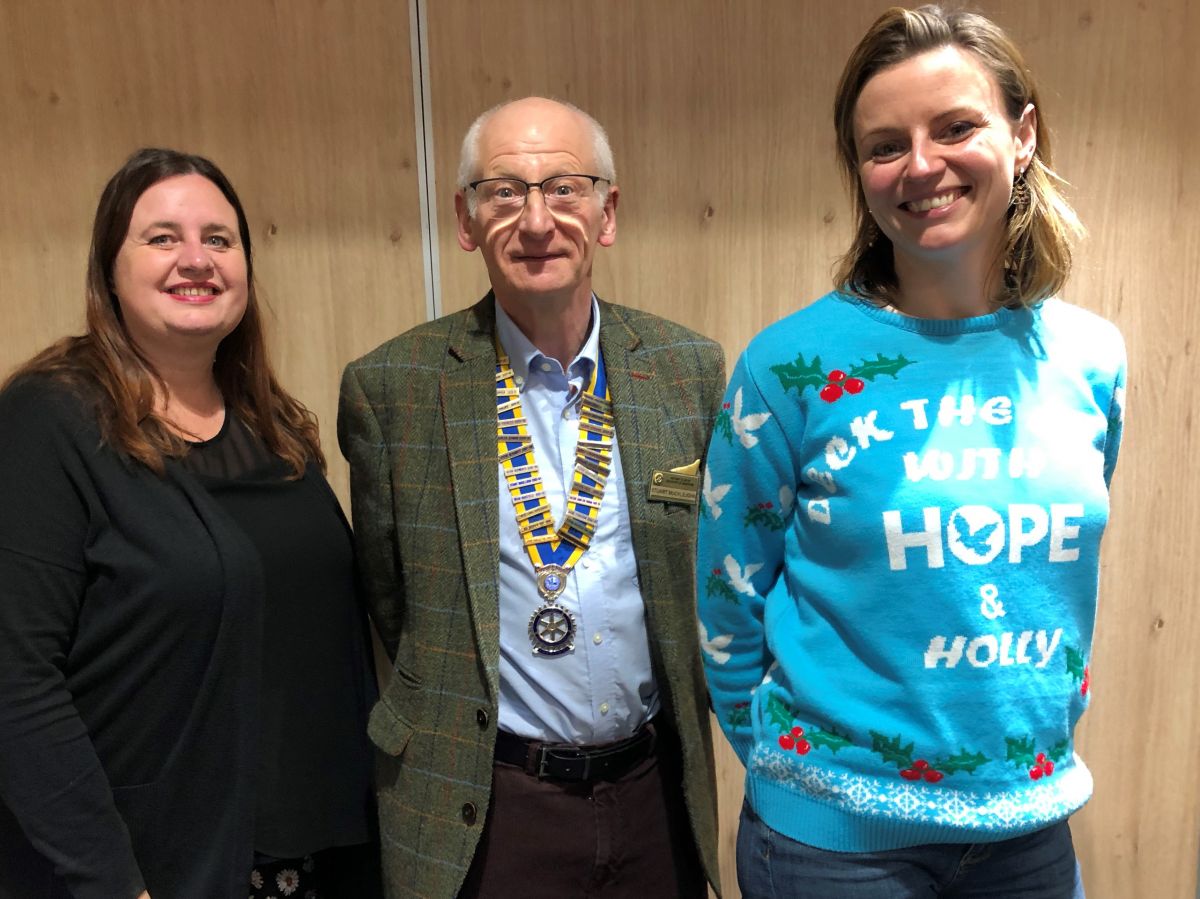 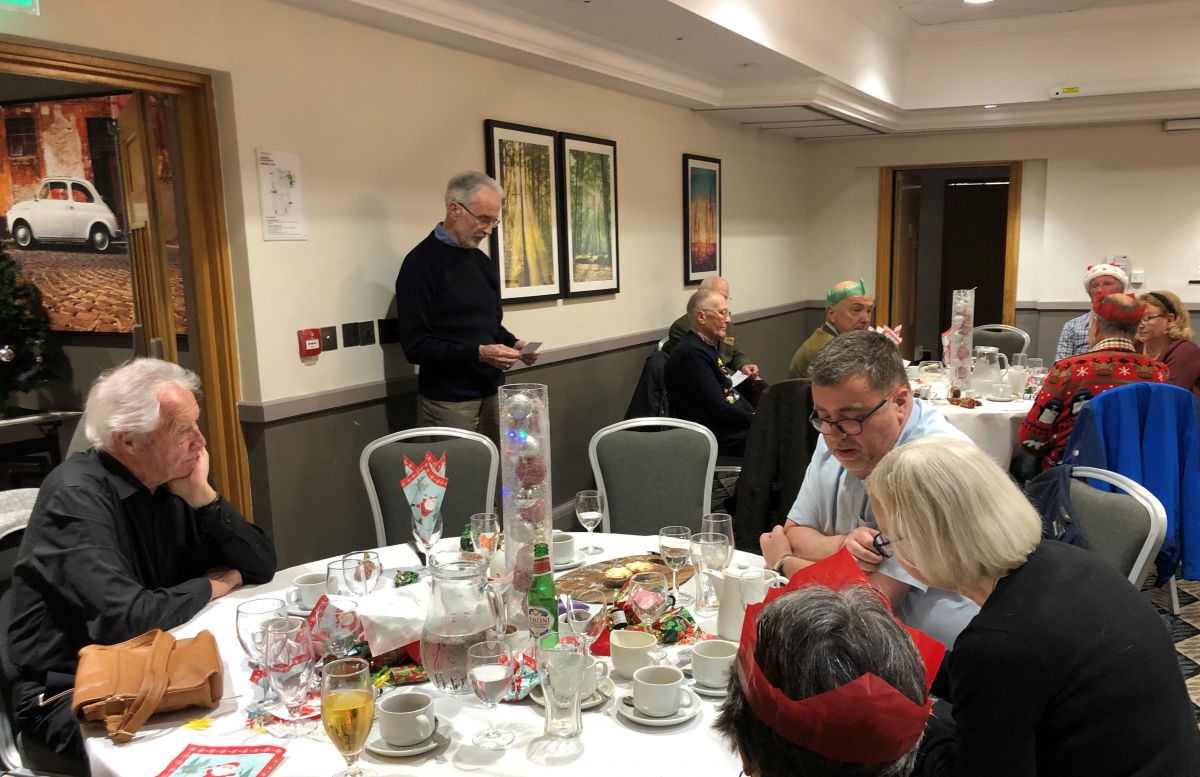 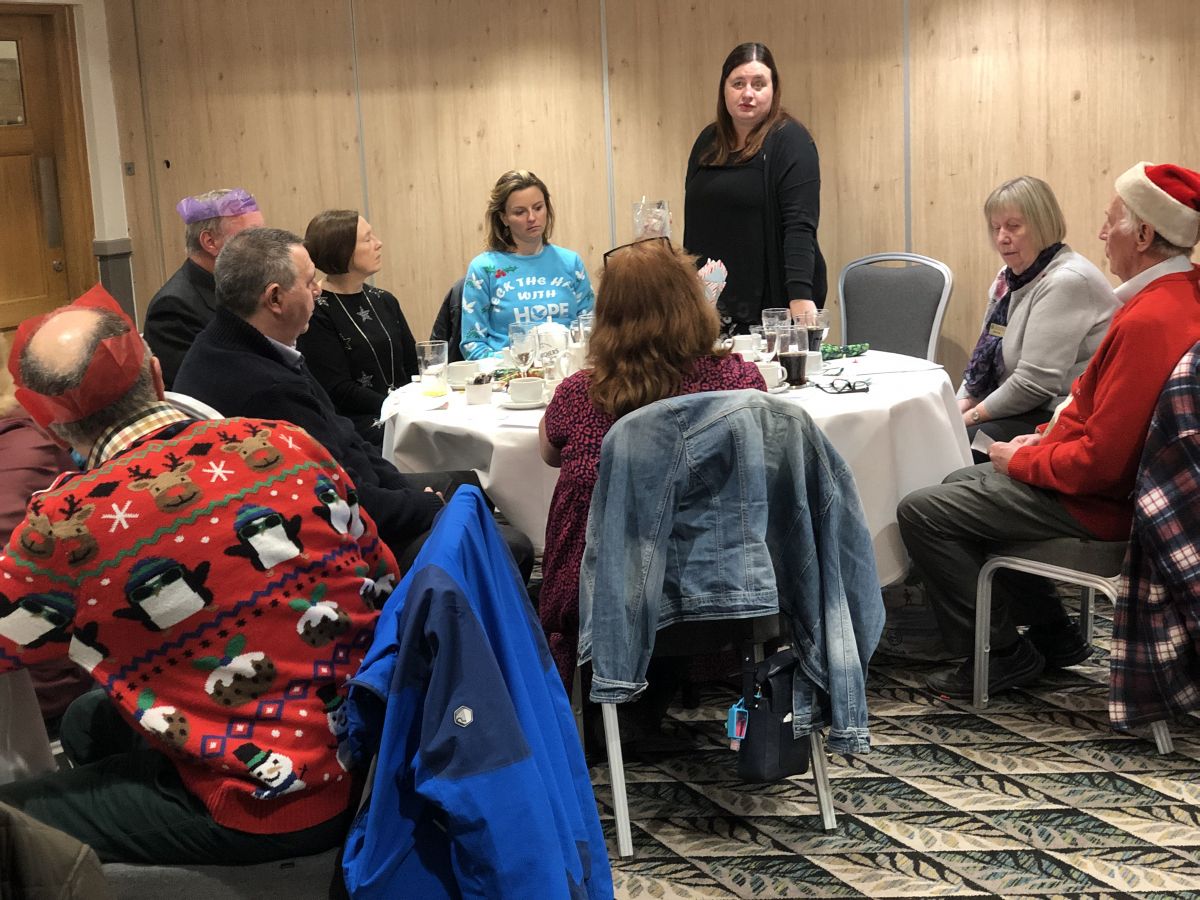 President Stuart welcomed everyone to this, our Rotary Club's last meeting of the year which took place on Weds 21st December with a number of guests present....:including Peter & Julie Dorans, John Saunders, Eadie Knight, Sue Riddle, Gina Ward, Anne Dunkley, Libby Gluyas, Jessica Southworth, Lesley Trivett, Nigel Terrett, Major Carl Huggins and AG, Richard Power.
Master of Ceremonies David French conducted the Heads and Tails challenge prior to the serving of the Festive fare which consisted of a seasonal buffet.
David, later hosted the 12 Days of Christmas with each of the four tables taking 3 days each, standing and ‘singing’ in turn. Always fun - but don’t give up the day job for crooning!
Following more fun and games President Stuart closed the meeting by thanking everyone for attending and making the evening so enjoyable with lots of fun, fellowship, laughter and a celebration of Rotary at it’s best.
Happy Christmas and New Year to members, family, friends and other readers

Notes from the meeting

During the meeting Stuart reflected on how fortunate we all in the UK and are thankful to the services for keeping things ticking over despite today's challenges, by keeping us safe and not subject to shelling from our neighbors ?

Stuart went on to refer to the wartime diary of his father who served in the Royal Artillery. Rob read an extract from the diary from a time when his father was serving in Gibraltar. which related to a specific day during a 3 day leave in September 1942. The entry listed the activities for the day, starting with breakfast and followed by a game of cards. The weather was warm. The tables were laid for lunch and Stuart’s father was one of those who waited on the dining gunners. Those waiting on table ate afterwards and listened to the King’s speech, raising a toast to his health. The meal included beer and 20 Players cigarettes. More card games followed and Stuart’s father won 7/6d. Throughout the days of service there were constant thoughts of home……..

David gave out black pouches, each containing a mystery object, The task was for each person to guess the contents (without opening the pouch). No-one guessed all 6 but Louise and Maureen both managed to identify 5. Louise won the tie break guessing the squashed metal object as a spectacle case - squashed previoulsy by David’s car.

The three guests whose organisations had benefited by funds being donated from the club were introduced in turn, the first being, Anne Dunkley, from Children's Hospital Pyjamas charity.  She was followed by Jessica Southworth from Hope Against Cancer.

Before announing the third speaker, President Stuart went on announce that the club had recent.y made a Christmas donation to South Leicester Foodbank but a representative could not join us as they were having their own staff and volunteer Christmas celebrations. A representative will come and talk to us in the New Year.

Rob gave us an update on One Roof Leicester and our support of Christmas Hampers. Today was the last day for club members to give donations before Christmas. Between us the club has raised £250 before Gift Aid.
40 hampers are being prepared for delivery in the next few days.

We have, of course, given donations to other charities throughout the year but the ones mentioned were our focus for Christmas giving. 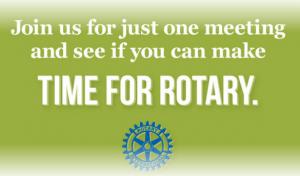 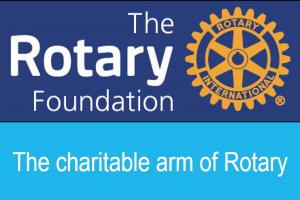