Rotary Walk from the Wharf, Bugbrooke 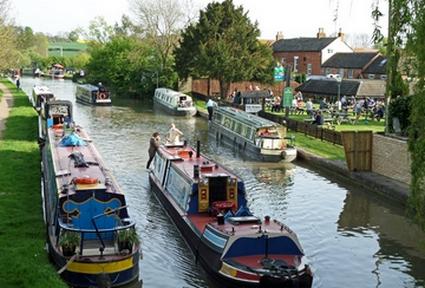 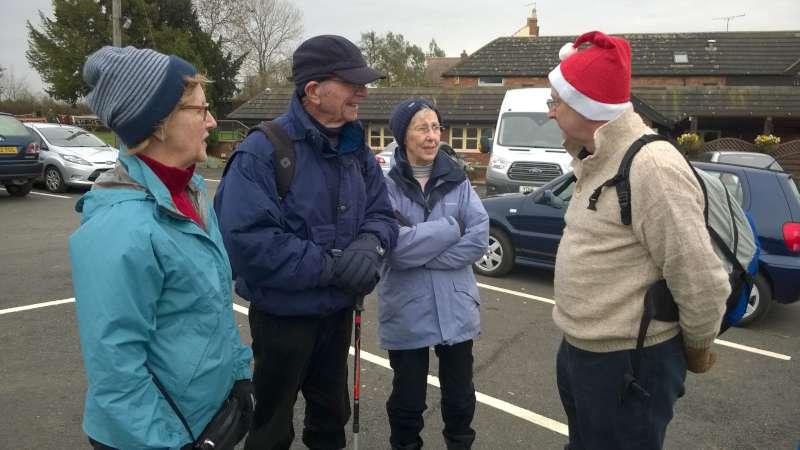 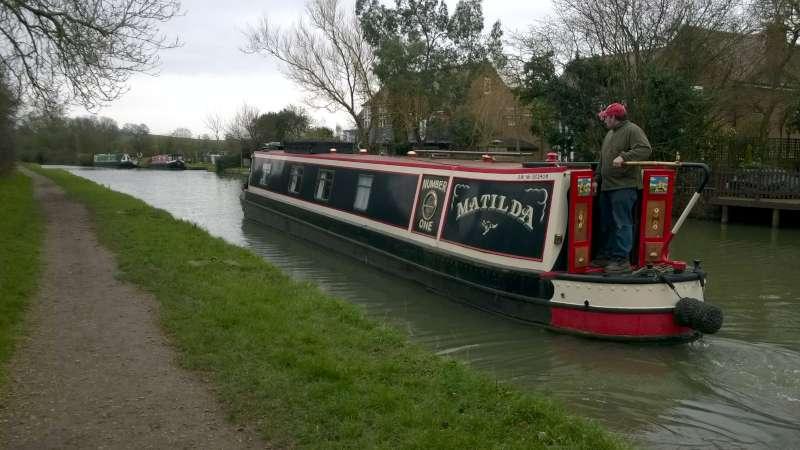 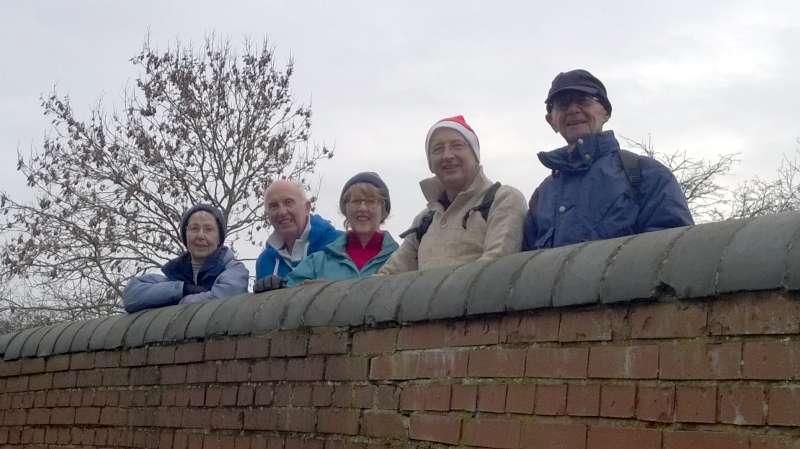 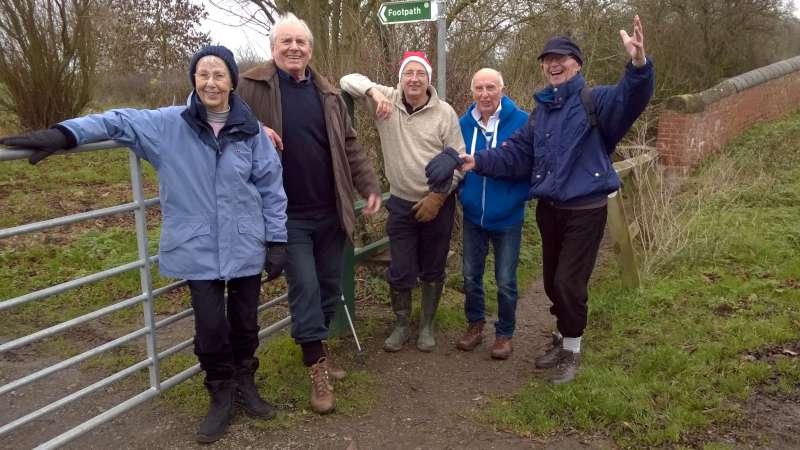 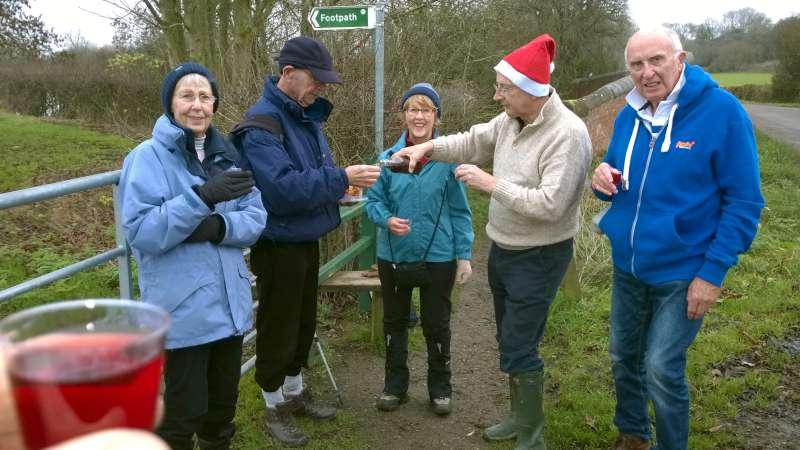 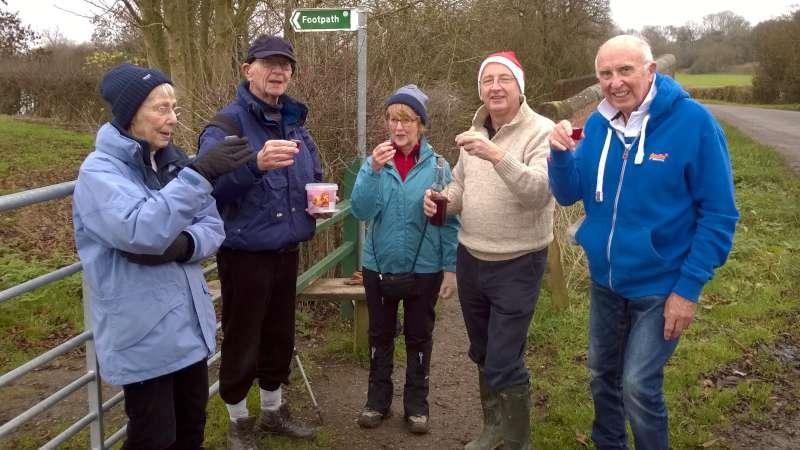 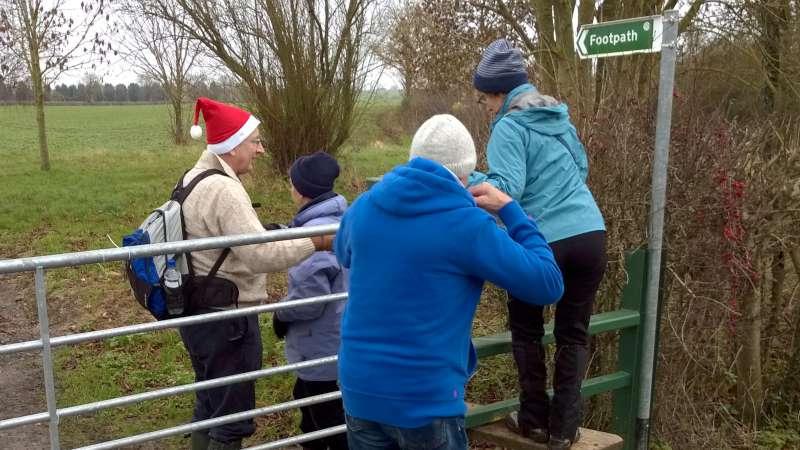 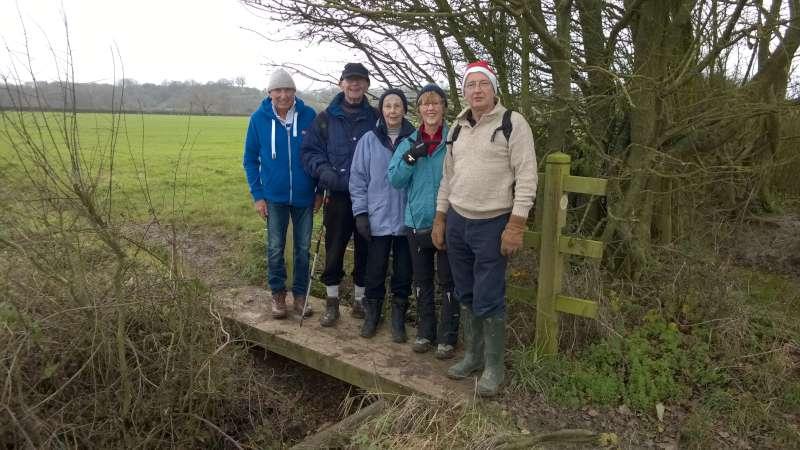 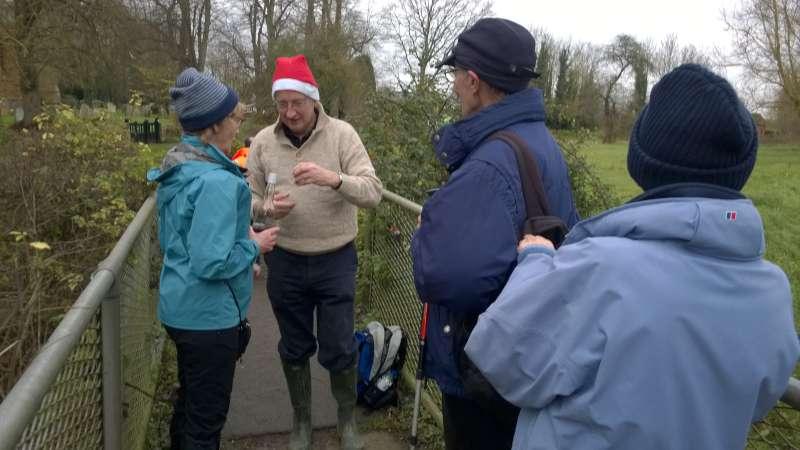 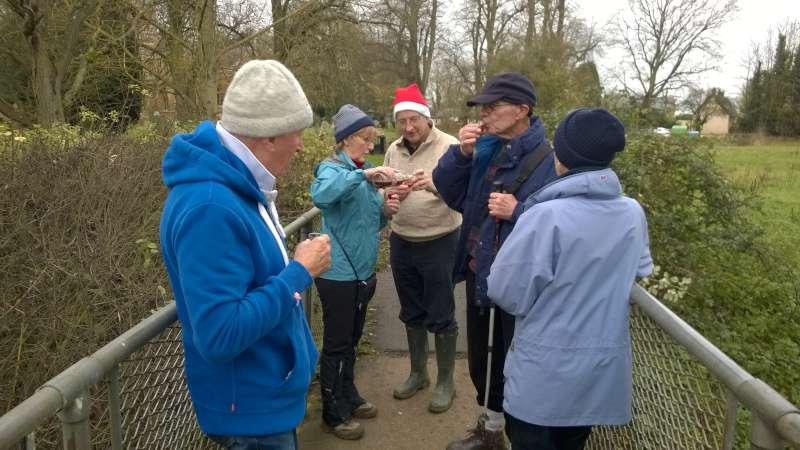 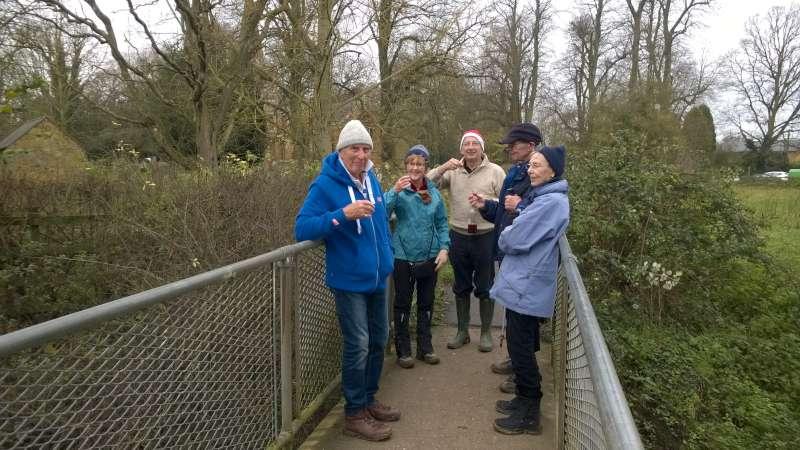 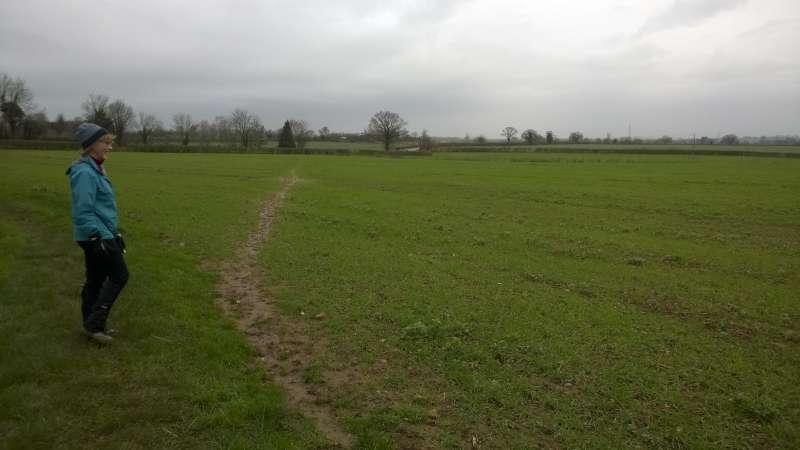 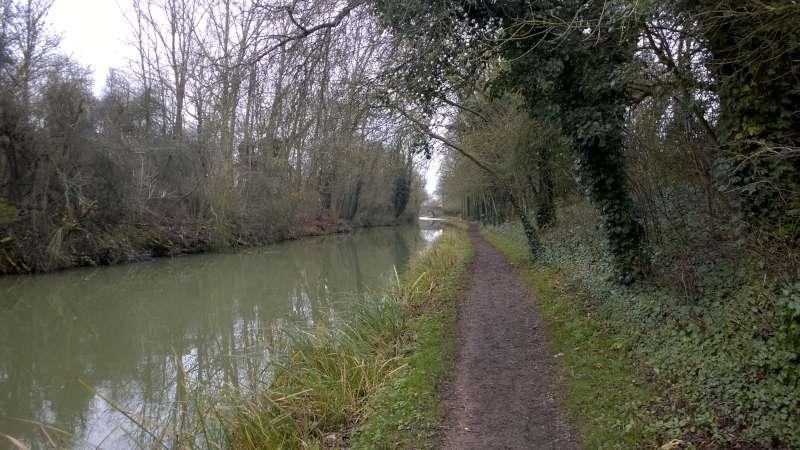 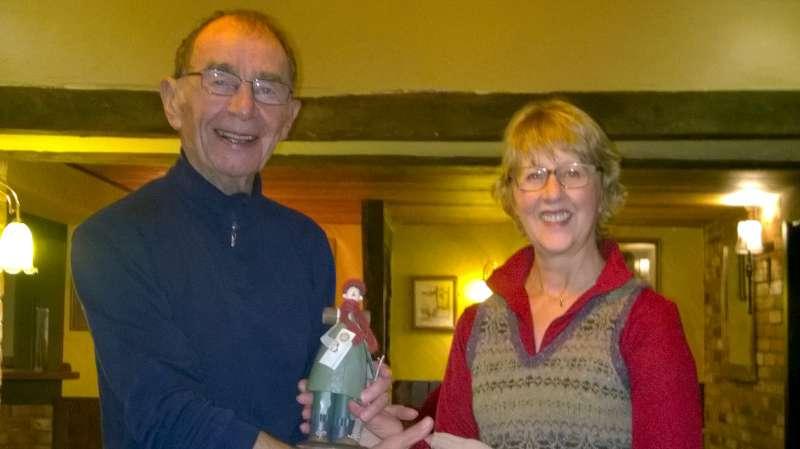 from the picturesque canalside inn, The Wharf at Bugbrooke, the walk will be a gentle stroll along the Grand Union Canal with a return on firm surfaces through the village of Bugbrooke itself.

Meet at 11.30 for coffee and mince pies and to select your lunch. There might be a refreshment stop en route (!) and lunch will be served at 14.00 (2pm for the non-continentals).

If you wish to come for lunch only, please let me have your lunch choices in advance : You can use this link for a PDF version of the menu

Six of us – yes, just the elite few – rambled festively around Bugbrooke on 17 December for our final Rotary walk of the year. Keeper of the Rotary Funds Brian organised this expedition which started from The Wharf Inn. We were astonished to discover that this public house is on the canal – who’d have thought?

Being a festive stroll arduous expedition, we fortified ourselves for the challenge ahead with coffee and mince pies in the pub. Raring to go after this, we paused briefly for the health & safety briefing and then strode off towards the canal under the leadership of the Treasurer. It was an exceptionally mild day for the time of year, and Philip cut a dash in his bright blue hoodie. Stan, Val, President John and Elspeth were more conventionally attired. As the photos attest, Walk Meister Brian, hot foot from his duties at the Santa Fun Run, sported the appropriate red and white hat.

The path along the canal required vigilance and balance in order not to end up in the water, the way being somewhat narrow and muddy. Our health & safety procedures forbade us from falling in the canal and I am pleased to report that not a single breach of these regulations occurred en route. After a mile or so (OK, probably a bit less) of canal-side tramping, we paused at a convenient bridge for some restorative libation: sloe gin courtesy of Brian and Elspeth’s friend Elizabeth who lives in Yorkshire and has joined us on a previous Rotary walk. There were necessary sweet treats to act as blotting paper for the gin.

Fortified for the next stage of our expedition, we set out across a clay-filled field of what appeared to be beans. After much moaning about muddy boots, we soon emerged into the outer environs of Bugbrooke village and walked down a tarmacked path to another convenient bridge by the church. More sloe gin was required and we were surprised that a local dog walker who came upon us didn’t want to join in, claiming he had to get back to work. (Poor excuse). On through the village and round past Laddermakers Row, we crossed more fields before finding ourselves back at the canal. (Details of this part of the walk are a little hazy – could it be the gin?) We had another short section of towpath to cover before we reached the pub. Waiting for us there were Val and Stan who had opted for the shorter detour after the second gin stop.

We enjoyed a delicious and leisurely lunch at the Wharf Inn, accompanied by local ales. The Walker of the Month trophy was presented to Stan. The citation referred to his long service to Rotary walks, his erudite conversation, dexterity with his pole and devotion to custard. As you will see from the photo, the Walker now has a scarf and hat to reflect the season.

All in all, we had a very jolly time.