A resumé of the rewarding activities in which we are involved supporting our community and good causes.

Local Clubs get together to help Thomas

We joined with local Herne Bay, Whitstable and Chestfield Rotary Clubs together with Whitstable Non-Ecclesiastical Society to buy a special tricycle for Thomas Mumford, a child who is seriously handicapped. The tricycle will give him much greater mobility.  His parents Caroline and Steve stressed how much easier this has made life for the family.

The photograph shows the Mumford Family with representatives of the donating clubs and the Whitstable Non-Ecclesiastical Society.

Club President Paul Cooke’s nominated charity in the current Rotary year 2019/2020 is Porchlight to support its valuable work with the homeless in Kent and by its Rough Sleeper Team helping people off the streets.  As a result of the club’s fundraising activities including Country Pursuits Day last September and the Barn Dance to come in May the club will make a substantial donation at the end on the Rotary year. Other local charities will be supported as in the past.

The club donated £6,000 to Hope for Tomorrow in Immediate Past Club President Les Leslie‘s year and £5,000 to the Umbrella Centre in Canterbury. Hope for Tomorrow is a national charity dedicated to bringing cancer care closer to patients’ homes and which has provided a mobile cancer care unit in East Kent. The Umbrella Centre is a Community Centre located in Canterbury that is open to everybody and particularly provides support to people with mental health problems.

Club President Elect Laurie Wakeham has nominated the Pilgrims Hospices for the club to support in the next Rotary year 2020/2021.  For many years club members have acted as marshals for Canterbury Half Marathon, which is a fundraising event in aid of The Pilgrims Hospices.

A donation of £500 has been made in each of the past two years to Festability, a local charity putting on a Music Festival at Quex Park at Birchington in Kent in May for People with disabilities.

Each Christmas club members deliver to the elderly, the lonely and those in need parcels donated by the Lord Mayor’s Christmas Gift Fund. 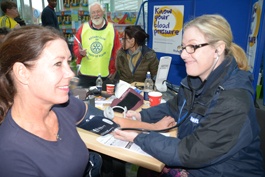 The Club’s Annual Know Your Blood Pressure Day will be held on Friday 24th April 2020 at Asda offering free blood pressure checks to shoppers to identify those with dangerously high blood pressure and to publicise its dangers. The event is held in conjunction with The Stroke Association and with the help of stroke specialist nurses from the local NHS Kent Community Health Trust.