We obtain much enjoyment and satisfaction from supporting local charities and organisations which promote the welfare of young persons..

We obtain much enjoyment and satisfaction from supporting local charities and organisations which promote the welfare of young persons.

We support Canterbury Academy’s Sports Scholarship Programme, which offers financial support to those students competing in sport at a very high level, by an annual donation of £500, in order to help to meet the high costs of training and competing.

The club also donates a prize at the Academy’s Annual Presentation Evening.

Club members conduct CV Training and mock job interviews with students from the Academy to help them to prepare them for the difficult task of seeking employment at the conclusion of their studies. 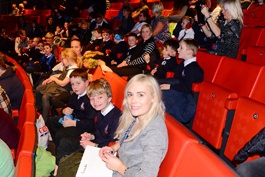 The club organises an annual pantomime trip to The Marlowe Theatre in Canterbury for autistic children from the Oysters Specialist Provision at Joy Lane School in Whitstable. They attended the special “relaxed” performance of Cinderella specifically designed and adapted for children who are autistic and with learning needs. The club also provides the children with a summer “Kids Out” event, which in previous years has been to Wingham Wildlife Park, but this year was to Faversham Activity Centre.

Photographs show the children, staff members and Past   President Chris Jackson with other club members outside The Marlowe Theatre in January 2018 and the children in their seats waiting for the show to start. 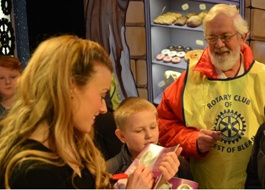 The club takes young carers supported by the Kent Young Carers Project to the annual pantomime at The Marlowe.  Young carers are children whose role caring for other members of their family makes normal childhood activities impossible. They enjoy a backstage visit after the show and meet the stars of the show. Club members then escort the young carers to Pizza Hut to enjoy a pizza meal.

Photograph shows young carers with stars of the show and Immediate Past President Les Leslie with other club members after the performance of Cinderella in January 2019.

We support St. Nicholas School in Canterbury, a special school for pupils aged 4 to 19 years with severe learning needs. We sponsored children and members of staff to attend the special relaxed performance of the pantomime at The Marlowe Theatre in November 2018.

The club also in the past has made donations towards the various projects undertaken by the PTFA of the school, including the refurbishment of the playground area and renovation the school garden, making it more suitable for the use of the children.

The photograph shows Head Teacher Daniel Lewis explaining the use of the garden to club members.

The annual Spirit of Try Angle Awards organised by the Education and Young People’s Services of Kent County Council to celebrate the achievement of young people from across Kent is also sponsored by the club by a donation.  The event was last held in January 2019 when Immediate Past Club President Les Leslie and other club members attended.

The club sponsors Canterbury Festival’s Discovery Workshop which provides an arts award delivered in local primary schools, which introduces children to the arts and involves children in the Festival.