Godalming Club was one of the founders of the Rotary Jaipur Limb Project and continues to support it.

Here is their Newsletter.

We look forward to supporting them again with a Fund-raising Curry Eveneing in May, when Roger While will be present to give first-hand information about the project.

We hosted an Italian-themed dinner at the newly refurbished Wilfrid Noyce Centre in Godalming in support of the Natron Healthcare Project.

Our guest speaker was Dr. Penny Aeberhard, who founded the charity in 2008. 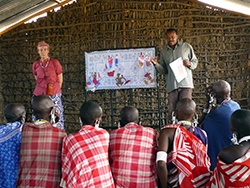 The charity was established in 2008 by Dr. Penny Aeberhard (pictured centre) and Melanie Finn. It works with existing medical and social organisations aiming at local sustainability.

The Natron Healthcare Project has been supported by Rotary for six years.

The project brings basic healthcare to isolated villages in the remote region of Longido, without regular and accessible health services. The Project aims for sustainability: extending, supporting and integrating existing resources, with particular emphasis on health education of communities. 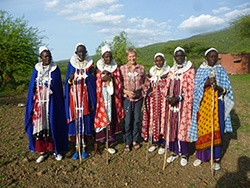 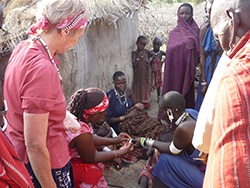 It was sometime in late 2012 or early 2013 that Mark came to Skillway to talk about designing a desk which could be easily made and easily transported in Tanzania, and maybe throughout Africa, as he had recognised a tremendous need for the children to have basic facilities in school.

He called it the Wosi Wosi desk after the community where he had seen hordes of eager children, happy to be in school, but sitting on floors in cramped, bare rooms. So began a long journey through some enormous difficulties sourcing the right kinds of materials - an economic as well as a sustainability issue - and developing a design that could be cut from one sheet of material and assembled without tools. One of the tutors at Skillway came up with a conceptual design; a family friend of Mark's made a small model, and Skillway made a first full size model.

However, the greatest difficulty and sadness was that much of this development was done while Mark was terminally ill.  He remained passionate about it, and cheerfully continued to pursue progress of the project.

At his funeral in March 2014, generous donations were made in Mark's memory to enable the project to progress. There are many people who have been involved in finally achieving a successful outcome and the provision of (hopefully just the first)  110 or so desks seating 220 children, but the biggest thank you must go the Peter Ricketts, a Guildford Rotarian  and Faye Cran, a Rotarian in Arushu, Tanzania. Together they have smoothed the pathway and Faye found a local man who has run with the concept and built a desk that can be easily transported, put together without tools, and be produced economically from local resources.

Thank you to all the people involved – and to Mark who was so passionate about many things.  We trust that we have honoured your vision, Mark. Rest in Peace.

In August 2012 Godalming Rotary club supported a project  through a new member who was previously a member of the Rotary Club of Pietersmaritsberg, South Africa before coming to the UK. That Club supports the Msunduzi Hospice Association, and Godalming donated £500 towards the cost of a weeks residential course training 18 women in Palliative care for Older Persons. This course was very successful and cost a total of  20.000 Rand (£1450).We have continued to support Marys Meals, a Scottish Charity which is feeding over 750.000 school children  daily in over a dozen countries in the developing world.

We have had speakers from and supported:

The Lake Natron Project ( a clinical unit in Tanzania), Marys Meals, The Jubilee Trust,  Sand Dams (a  Charity building Dams which will fill with silt and sand which will hold water  and will  provide Water in drought Areas),  School in a bag (a Charity providing Haversacks for School children containing all the necessary  stationary and other materials to help them for their school work), The Rotary Jaipur Limb Trust,  The Children of Sumatra,( a Charity run by the Rotary Club of Billingshurst  operating a Clinic for Children with Cleft palates), and many other Charities as needs arise, especially where there have been natural disasters.

In 2013 and 2016  we have organised a Curry evening to raise a donation to the Rotary  Jaipur Limb Trust. This Trust was originally started by a Godalming Rotarian many years ago and is now one of the most successful Rotary projects operating Limb replacement centres in India, Africa and Haiti. These evenings were well supported by of our neighbouring Rotary Clubs and wehave  donated over £2,000 to the Trust.

What is the Jaipur Limb?

The Jaipur Limb is an artificial leg developed at the Mahaveer hospital in Jaipur, India. The unique component is the Jaipur foot, a clever combination of wood and various densities of rubber vulcanised into a realistic looking brown foot. The Jaipur limb is hard-wearing and will last for three or four years, longer if worn with a shoe.

One of the major differences between the Jaipur technology and western technology is the cost - whereas a western limb will cost between £1,000.00 and £2,000.00, a Jaipur limb can be made and fitted for as little as £25.00.

Are you looking for a new job?

What has Godalming Rotary been up to this year? Here are some recent events.