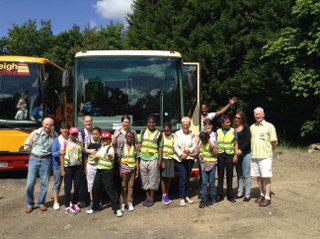 The coach arranged through the courtesy of our friend Derrick Johnson from Lewisham Council left the school at 9.30am; this was after registration when President Joe Burchell unfortunately received a late mark!!! (Master of Arms please note) and arrived at the theme park just before 11 Oclock.

At the entrance everyone donned Kids Out baseball caps (both adults and children) and then made their way excitedly through the entrance turnstiles.

It was decided that a water ride would be the first port of call and the children (and Joe) enjoyed getting wet on the Dragon falls. This was quickly followed by the Peeking Heights a type of Ferris wheel ride.

Lunchtime came round quickly, and at 12.00 everyone had a picnic bag, provided by Chessington & Rotary, which they ate on a lovely grassed area next to the explorers outpost.

After lunch the children enjoyed several other rides including the bubble works, and the sea storm; some were even very brave enough to try the Kobra and Vampire roller coasters!

All too soon our day was coming to an end, but not before everyone was treated to either an ice cream or ice-lolly by President Joe. It had been a very warm day!

The group ambled back to the coach, which after the customary farewell photo left the car park at 2.30 getting back to Drumbeat school at 4.00.

The children, despite some of their difficulties, were very well behaved both on the coach and at the theme park. They had thoroughly enjoyed their day and all thanked the accompanying Rotarians as they left the coach. Both teachers and helpers agreed they had had a great day and were looking forward to next years Kids Out already.

Thanks go to all Rotarians who helped to organise and execute this highly successful day for the children of Drumbeat school.