Speakers and other Visitors to the Club


19 August 2014: Member Bernard Davies gave a short PP presentation of his exciting afternoon at RAF Coningsby, the base for The Battle of Britain Memorial Flight.which includes the one airworthy Lancaster in the UK. Bernard was privileged in being invited by Pilot Flt.Lt Roger Nicholls to inspect the inside of this legendary aircraft.

Here below are a few pictures taken of this memorable experience. 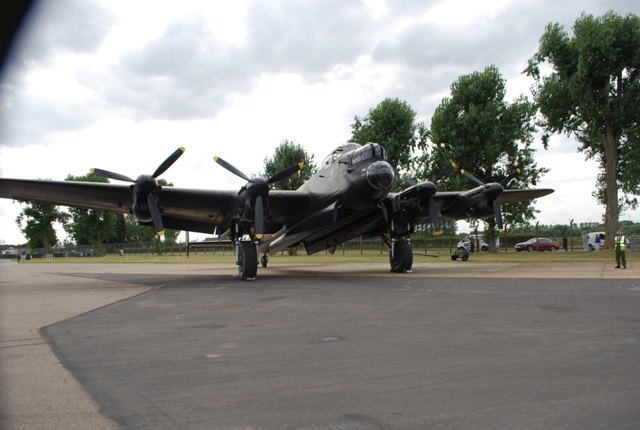 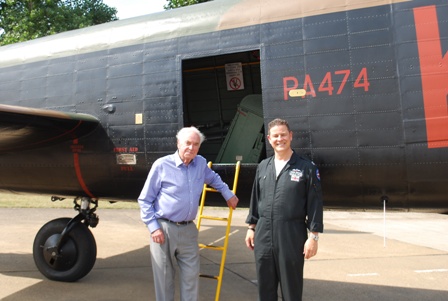 Pilot Roger Nicholls and Bernard ready to go aboard 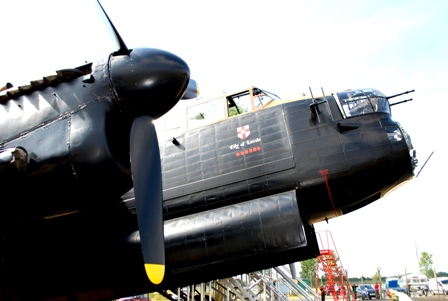 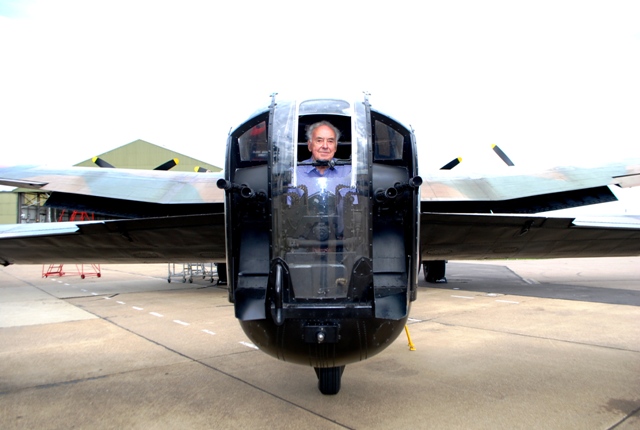 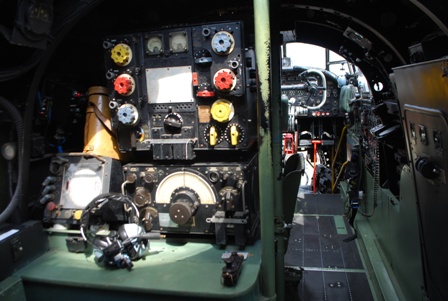 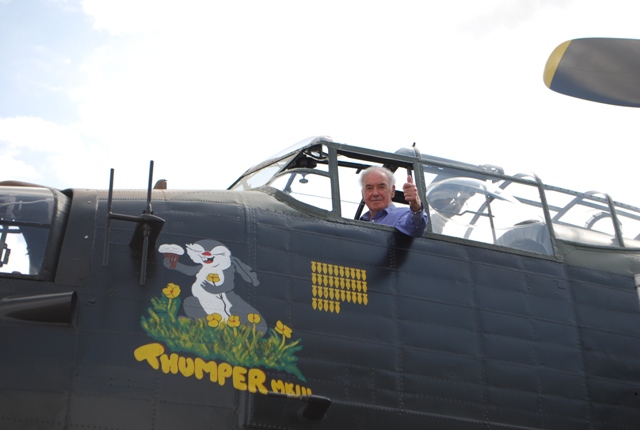 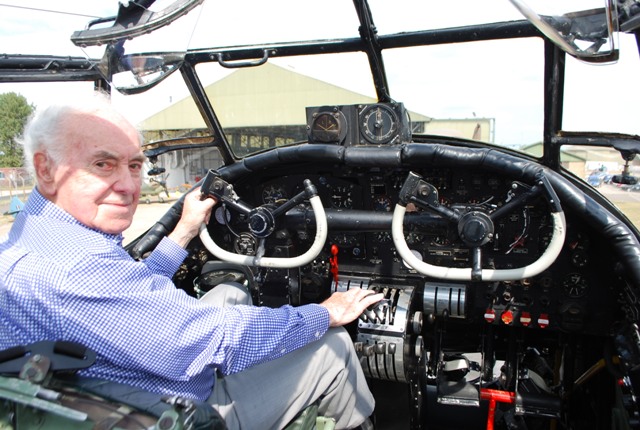 Bernard "at the controls"

On the same evening, we were visited by Ashley Tevault, from Colorado USA. A former Ambassadorial Scholar amd now an Honorary Rotarian. She will be joining he Peace Corps in West Africa. 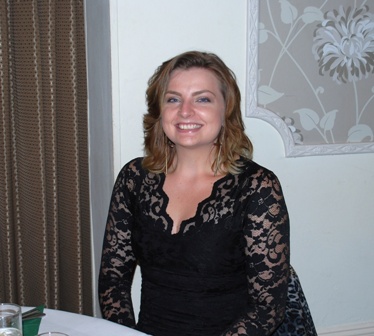 Another visitor from USA that same evening. Louisa Dykstra

Our speaker was Stevie Jepson Distrct Commissioner for Wilmslow Guides

In her presentation on the ctivities of the Guides movement.she included  that being a member of the Guides in her earlier years had improved her job opportunities and recommended others to become members.

Left, is  Claire, also in the Guides,Carol Parry a Rotarian visitor fron RC of LLangollen and on the right, Stevie Jepson 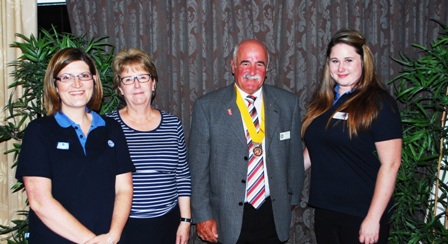 District Governor Alastair Bain (Left) and our speaker for the meeting Business Development Manager Paul Whittaker from Big Storage Group were with us on 23rd September.

In recognition of  assistance by Big Store with our Rota-Toy campaign, Paul was presented with a Community Service Award by President Ian Bradley (right).

In thanking the club for this award, Paul commented that he hoped that the branch .

could work alongside the Wilmslow Dean Rotary Club and be of further help in the future. 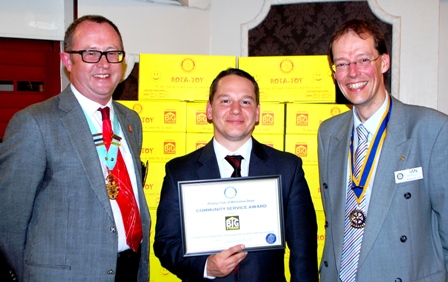 Speakers tonight were Crystel Berridge and Anne Dawson from Hampers of Hope.

Hampers of Hope is a Christian charity with the aim of relieving poverty and restoring hope in North East Cheshire. Since 2011, it has helped local people through the work of its foodbank, money management courses, job clubs and Hope Centres. For more information about Hampers of Hope call 0800 1114986. 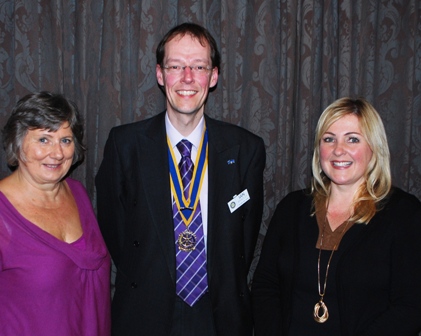 On the 2nd. December our speaker was Paul Hammersley.

working to improve the cancer  treatment for childen

living .in the low and middle income countries in the world. 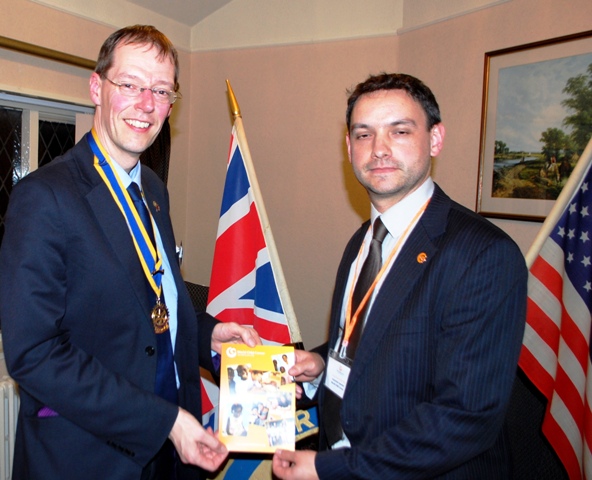 20th January 2015.  Dr. Rachael Talbot a practicing chiropractor, talked to us about her profession and the many benefits that can be achieved for the relief of pain by the modern treatments to the spine.

Here pictured with President Ian Bradley with her replica spine 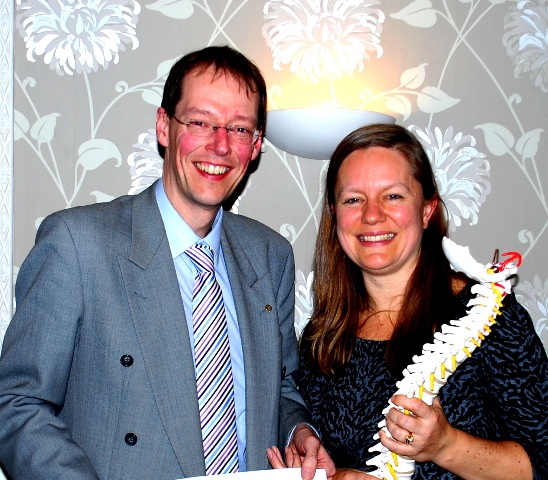 24th February 2015  We were visited this evening by Diane Smith, 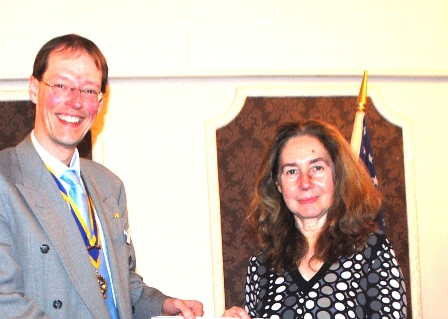 .Pictured above with President Ian Bradley, Dianne reviewed her work in Wilmslow since 1988 and spoke of the business and cultural changes now influencing the vitality of all town centres. 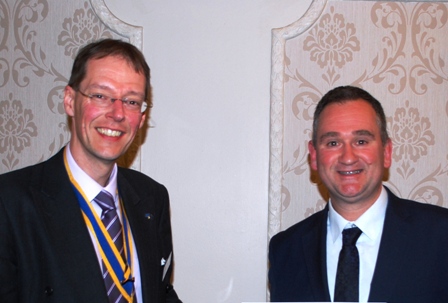 Our speaker this evening was Optometrist Ian Ashworth,

pictured above with President Ian Bradley.

Known as "Open Arms Village".Tthis is a safe fanily environment for100 children.

most of whom have been orphaned,abandoned or removed from their homes due to neglect or abuse.

During the group's charity work in Kenya, Ian provided 600 pairs of glasses to people from a nearby slum.

Ian was presented with a cheque from the Rotary Club of Wilmslow Dean ,

as a donation to this worthy charity. 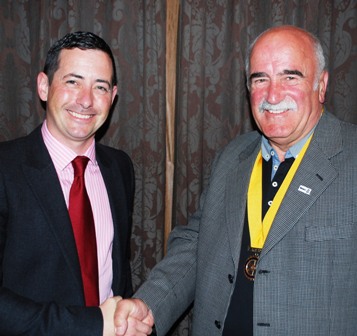 to students from Cheshire, Warrington and Halton.

to Schools, Colleges and Businesses.

On this evening there was a double occasion.

Firstly, we had the pleasure to welcome Bill Shenton,  a Founder Member of

Bill was presented with a Community Service Award for his valuable service and support to the Rotary Club albeit having left the club due to business reasons.

Here he is alomgside other Founder Members, (left to right) Dudley Ashworth 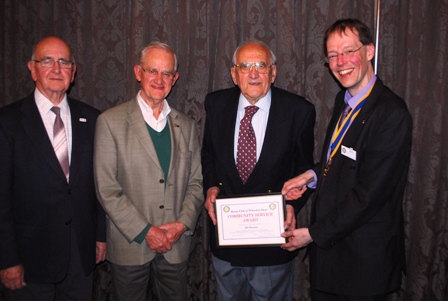 And one with President Ian Bradley 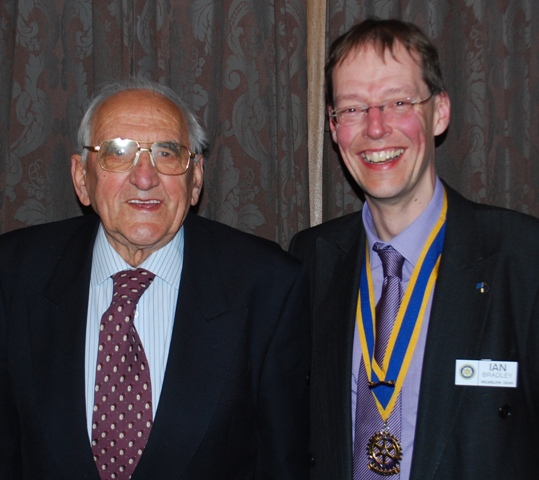 Second.  On the same evening. our speaker was John Granger

John  entertained us with facinating stories  of the various jobs he held during his busy life,

culminating with his position as Market Manager Stockport. 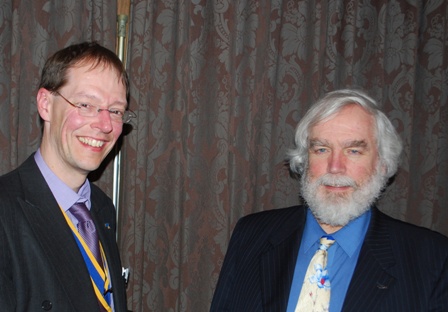 At our meeting on 28th July

Mark gave us a detailed presentation of the work of  this splendid volunteer group, with a slide show.

Mark brought with him a selection of the equipment the group uses. 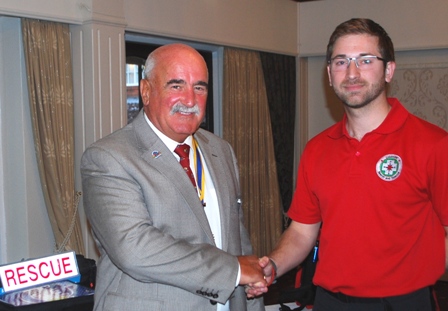 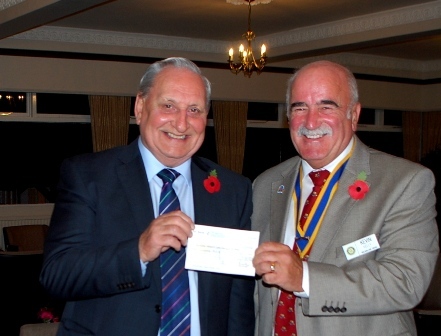 16th August, we were pleased to welcome speaker Peter Webb, a geologist, who gave us a talk on the pros and cons of Fracking. He was able to giv eus unbiased responses to the many questions posed by the members. Pictured below, Mr Webb demonstrates the gas hidden within a specimin of shale, by literally igniting the gas within. 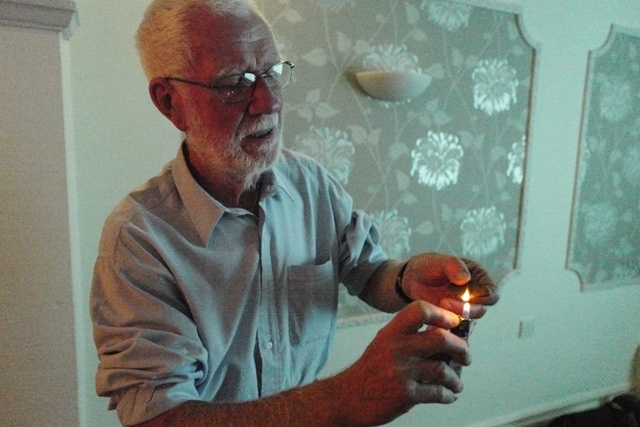 13th September, Mike Erskine gave us a fascinating illustrated talk on the history of Styal Mill 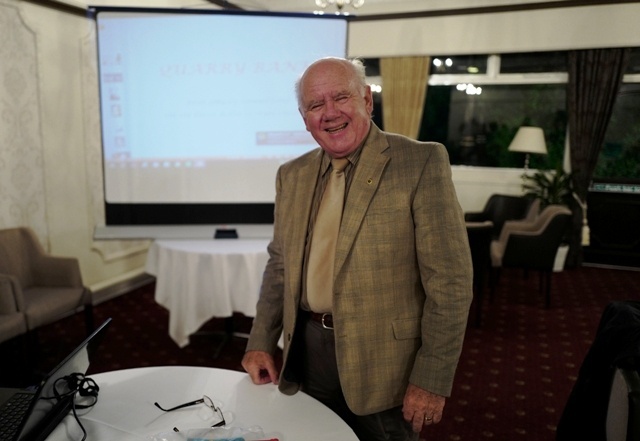 Club member Rotarian Reg Lord  demonstrates his bell ringing technique during a talk he gave the club on his former role as Town Crier for Chadderton.
He is now the official Town Crier for Wilmslow 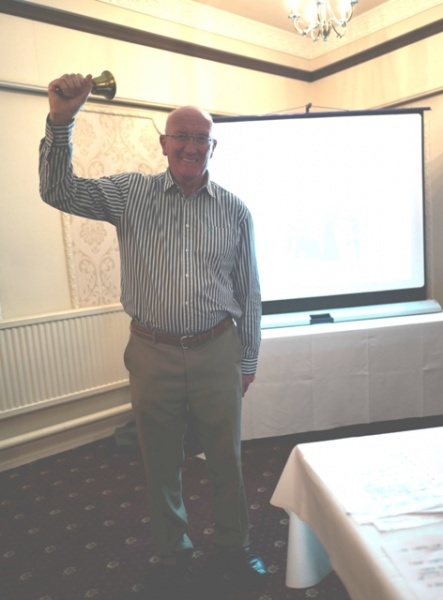 A record of President's Night and Handover

This page includes photos of some of the speakers who have given us such pleasure during the year.

What we do at/around Christmas

Rotary at the Wilmslow Show

Membership Services looks after the Club and its membership. It organises a number of Club activities such as the Club's Charter Night.

This is the Club's Annual Scarecrow Festival

Donate to our Charity/Trust Fund

Make an online donation to us.

A toy from a child to a child 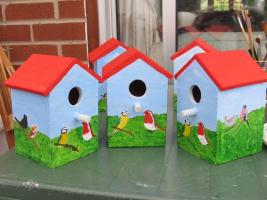 Details and/or photos of a selection of past events and activities.

ROTARY AT THE TOWN'S ANNUAL SHOW

We don't always spend our time at the Deanwater Hotel. Here are some of our other events.

Speakers and other Visitors to the Club

The Wilmslow Swimathon is running annually (normally in the Spring-time) which enables schools, charities, voluntary organisations, community groups, individuals, etc to raise funds for their or other charities by doing lots of swimming in one hour.

The Club Float is used at many of our public appearances.

EVERY YEAR WE CELEBRATE THE BIRTHDAY OF THE CLUB