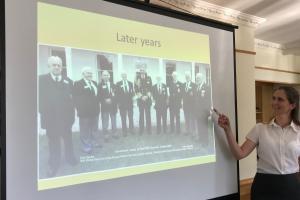 During the talk Eleanore Browning reflected on the tragic events on HMS Charybdis and HMS Limbourne which was sunk as a result of enemy action on sea on 23rd October 1943.

Many of the bodies were washed up on the shores of Guernsey where the enemy forces conducted a funeral service in Guernsey which was attended by over 5,000 locals which gave their respects.

To commemorate the 75th Anniversary, GARNRM (Guernsey Association of Royal Navy and Royal Marines) will be holding a series of events in September.  Many of which will be available for the public to attend and support.