On Saturday morning 04 June, we held the Club's annual Spnonsored Bike Ride for the children of all eight of Deal's Primary Schools. We were raising funds for 'Send-a-Cow' charity ( details regarding the charity can be found at http://www.sendacow.org/  )

Representatives from Send-a-Cow (Sue & Chris Elliott) together with Dave Lister (AKA 'Daisy the Cow') made presentations to all eight schools and we estimate we addressed almost 2000 children. Despite the interest and excitement from the children, the actual number turning up to participate in the event was just 45 - notwithstanding this, all of the children seemed to enjoy the event.

Sponsorship money will be collected and it is intended to invite Sue & Chris Elliott to attend a future Club meeting to receive a cheque for the proceeds of the event.

Club members and friends gave their time to work as Track Marshals, Radio Operator, Nurse (Sus Crowther) to ensure safety, we had every child in our view throughout the track (all 1500M of it). The weather was kind to us and we received good feedback from some of the parents - who even took the trouble to thank us for putting on the event


Thank you for organising such a lovely event, my Granddaughter, Bella and I had a great time. Bella loved Daisy -Well done you!!

Thanks to you and all Deal Rotarians for organising the cycle ride at Bettshanger yesterday.  Very well organised and great to see Daisy on two wheels!  My daughter Kate really enjoyed the morning.

Please pass oin our thanks for all the effort put in to organise the sponsored cycle ride for the children yesterday. It was well organised so the children had a safe environment in which to get fit, enjoy the outdoors and raise money for charity

Such comments and the very happy faces of the children made the event very worthwhile - showing how Rotary works together, giving something back to the community

Here are a coupe of photographs taken during the morning: Start of the Sponsored Bike Ride - with 'Daisy' - the kids loved it, but one poor little lad was terrified by the Cow and waited till everyone (including Daisy) had gone, before he bravely cycled on with his Dad One of the many happy, smiley children that took part The talented 'Daisy' taking time out to have 'her' photo taken with the children (Daisy rode the bike around the track in his/her socks !)  - Clearly the star of the show !

On Saturday morning 18 June, participating children came along to Deal Town Hall and were presented with certificates to mark their achievements in taking part in the Sponsored Bike Ride and in raising funds for 'Send-a-Cow'. The event was chaired by David Hannent, with a welcome speech being given by our President Ian Dunkerley. Forty children plus their paraents attended and Deputy Deal Town Mayor Marlene Burnham kindly presented the cerificates and gave the children and their parents a guided tour around the Mayor's Parlour. We also had the presence of 'Daisy the Cow' (AKA David Lister) complete with handstands and rolling on her back!  Grateful thanks to Peter Rothschild, Howard Binsted, Ken Cox, Marlene Burnham, Ian Draper, David Hannent and  Edward Barkway for their kind help at Deal Town Hall. Deal Co-Op donated fairtrade banana's and chocolate . Sponsorship money received so far amounts to £1114.50 (including £40 paid direcectly to Send-a-Cow to claim gift aid)

The two ambassadors from Send-a-Cow (Sue & Chris Elliott) will be attending our meeting of 04 July, where we will present them with a cheque for their charity On Monday 04 July the Club welcomed Susan and Chris Elliott (Ambassadors for the 'Bike-a-Cow' Charity), where they were presented with a cheque, cash and gift aided payments totalling almost £1250.00

Chris thanked the Club (and more importantly the children of all eight local Primary Schools) for raising the funds for the charity. Susan, Chris and our very own 'Daisy' made presentations to all of the schools in the couple of weeks leading up to the event - a massive effort on their behalf to promote the bike ride and fundraising achieved 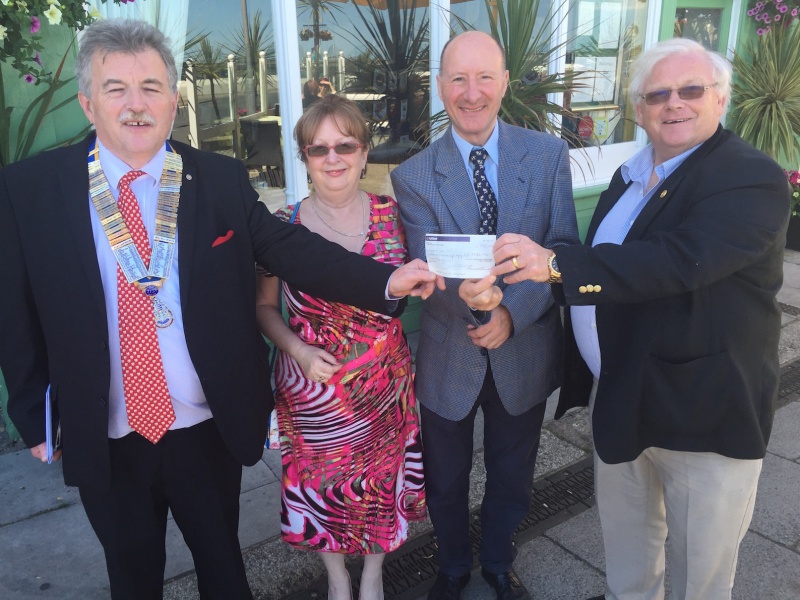