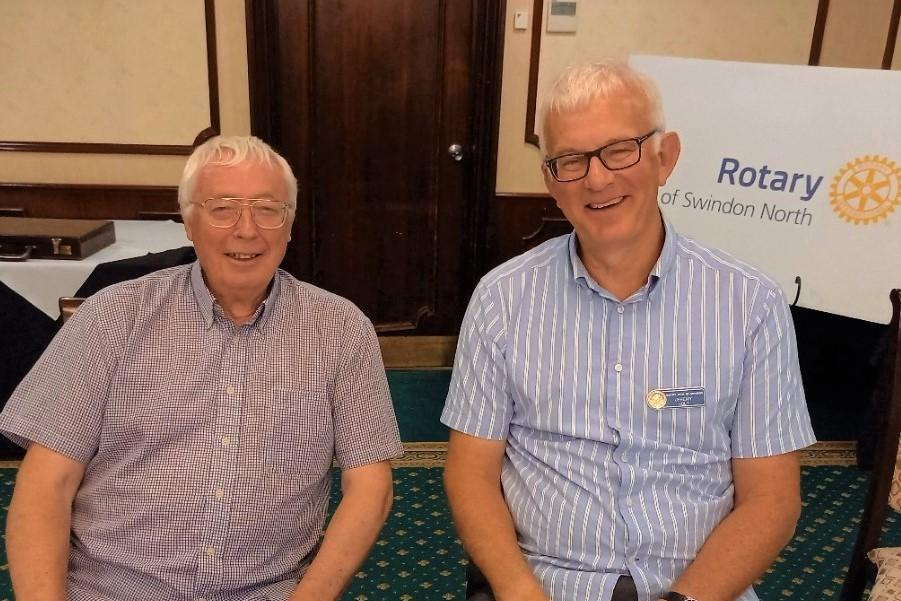 What is heroism?   Our speaker at this meeting (pictured above, on the right with Club President Terry on the left) said it’s either someone who shows tremendous courage or bravery, not necessarily physical courage, but also moral courage.  Or it is an act of self-sacrifice; someone who puts themselves in harms way to save others.

Swindon Rotarian Jeremy Holt introduced himself as a retired solicitor with a huge interest in heroes and acts of heroism, probably because he comes from a military family.

“Heroes are the stuff of films,” he said “but it’s not as simple as that. I will talk about the traditional idea of heroism, especially the view of it taken by the military, but I will question the validity and appropriateness of such a view and suggest that we should perhaps take a more nuanced approach.”

Why do people do heroic acts?  It could be because they are motivated by higher ideals or it might be from a sense of desperation.

The Victoria Cross, awarded to the military only, is given for valour: great courage in the face of danger, especially in battle.  In World War 1 only 25% of those awarded the VC actually survived.

“Then a soldier, full of strange oaths and bearded like the pard, jealous in honour, sudden and quick in quarrel, seeking the bubble reputation, even in the cannon's mouth."  Jeremy was quoting from Shakespeare’s seven Ages of Man

The George Cross is awarded to the non-military, but it is equal in every other way to the Victoria Cross.

Jeremy firmly believes all of us have a reservoir of courage.  We are all capable of a lot more bravery in the face of danger than we think we are.  Every one of us, he said, is capable of being a hero.  But the questions is, would we regard ourselves as a hero?  Would we want to be recognised as one?

Many heroes suffer from post-traumatic damage.  Not necessarily physical damage, but PTSD or feelings of guilt.  “Why did I survive when others didn’t?”  Not wanting to be recognised as a hero is a common after effect suffered by many.

Jeremy has a number of personal favourite heroes.  One is Terry Waite who in 1987 was held captive in Lebanon for almost 5 years by the Islamic Jihad Organisation.  The first four years were spent in solitary confinement.

Another is Captain Oates, the Antarctic explorer, who in an act of self-sacrifice chose certain death in order to relieve his three companions of the burden of caring for him.

Captain "Sully" Sullenberger, is hailed a hero because, as captain of US Airways Flight 1549, he brought his aircraft safely down on to the Hudson River after both engines failed due to a bird strike and all on board, 155 passengers and crew, survived.   But the incident has left Sully damaged and traumatized.

At least 200 people jumped hundreds of feet to their deaths from the Twin Towers in New York on 9/11.  They are all heroes, he said.