Graham Robinson organised a 6 mile (or less!) family walk in Wensleydale. All were welcome

Several of the party took up Alan Morrell's kind offer of coffee at his cottage in Preston Under Scar prior to the start of the event. The party then made its way to the Bolton Arms at Redmire where others were waiting for a sandwich lunch.

We then set off at about 1pm for a walk mostly on the level or on shallow slopes, over fields via Low Thoresby. After a while the more advanced walkers struck out for Carperby whilst the lesser mortals headed off for Bolton Castle. The supposed shallow slopes turned out to be quite a steep incline up to the Castle itself with more than a few red, perspiring walkers by the time we arrived at the castle.This meant that Group 1 were ready for a cup of tea on arrival at 3:00pm but we managed a second along with cake or cream tea when the more hardy souls arrived.at about 4.30pm. 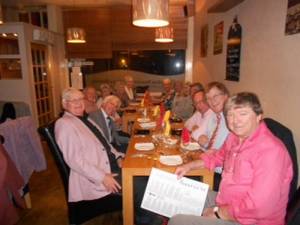 more Seven Blaize members and their wives attended the D1040 conference in Scarborough.

more President's Social Evening (which replaces our Charter Evening) - this event will include invitations to our partners, past members & widows of past members as well as any friends of Blaize and it's members that would like to attend.

Ilkley Last Night at the Proms

more John Waterhouse is organising a trip to the Last Night of the Proms in Ilkley. This is the usual concert and picnic that is the last night of Ilkley Festival. Let John know if you wish to go.

more The annual Christmas party took place at the home of Janet and Mike Clewes.

Walking Weekend in Dovedale in the Peak District

more Blaize members will attend their annual Walking Weekend at The Peveril of the Peak (one of the H F Holidays properties) in Dovedale adjacent to the Tissington Trail in the Peak District.

Visit to Japanese Garden at Eastby

more This garden visit was the long awaited second leg to Trevor Nash's talk about the garden 2 years ago. The fee for a tour of this garden was £6 which included sandwiches and quiche after the tour. The tour itself took one and a half hours.

more Inaugural "President's Social Evening" (which replaces our Charter Evening) - this event will include invitations to our partners, past members & widows of past members.

Proms on the Grove

more John Waterhouse had booked 2 tables for 10 at the finale event for the Ilkley Festival which is the usual concert and picnic on the Grove at Ilkley.

more Blaize members attended their annual Walking Weekend at Longmynd (one of the H F Holidays properties) which is set in a wonderful elevated location above the town of Church Stretton. 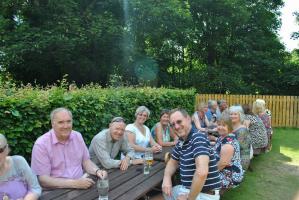 more The annual Presidents' Hello/Goodbye (when we traditionally celebrate the handover of office from one President to another) was at the Glen Public House Gilstead Lane Bingley BD16 3LN at 1pm.

more The Past Presidents' Dinner was again be held at Ilkley Golf Club. 15 Past Presidents attended along with their wives as well as two widows of former Presidents. A good night was enjoyed by all.

more Christmas Party at Rob and Ann Askew's home on 15th December 2012 at 7.30pm Part of the entertainment was a caricature drawing game which was won by Pat Howard - see the picture above

more The annual walk around Wensleydale took place on Sunday the 29th of July.

more 15 Blaize Rotarians along with wives and friends visited the York Mystery Plays. 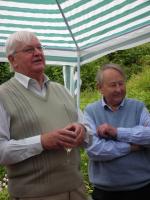 more The annual Presidents' Hello/Goodbye (when we traditionally celebrate the handover of office from one President to another) was a barbecue held at Alan and Marjorie's home.

more The annual Christmas party will be held on Saturday evening at the home of Marjorie and Alan Morrell. Further details to follow.

more The New Year's Day Walk is at 11am (12 noon for non-walkers) - meet for walk with lunch at The White Horse Inn Thornton.

more Members of Blaize will again undertake their annual walking weekend - this time around the Malham area. Walks of 3 difficulty levels will be organised.

more Visit to the Kings Hall Ilkley where we might even get a glimpse of Judith and Tim among the chorus of ruffians. Going on the past record this will be a popular event. Tim will pass around a tick sheet but if you want to be sure of tickets email him now.

more Despite a wet and wild afternoon 17 stalwarts headed out to the Grove for the annual Proms Concert.

more No Meeting at Bradford Club - Visit to LNT/Ginetta fctory in Leeds starting at 4:00pm.

more The annual lunch to celebrate one President completing his year of office and the new one taking over will take place at 1:00pm on 3/7/11 at the Waterhouse residence.

more See below for the full report. To see all the pictures at one go click on "gallery view" above. Individual pictures can then be enlarged by clicking on them.

back Rotary is not just about doing good deeds but also about enjoying yourself and this committee organises social activities. This page contains an archive of some of our activities.