The club 'Sunday Walk & Lunch' events provide a source of income from within the club with which we can support a local charity.

Theatre, concert and other visits are arranged several times a year and are always very enjoyable. 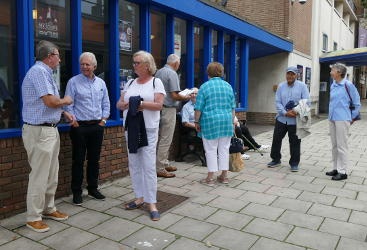 On Wednesday, 28 August 2019, a group if us gathered in the city centre (see photograph) to visit the CCTV Control Centre. We were met by the manager, who told us he had found himself in charge of the Council’s CCTV operations because Brian Collings, one of our Past Presidents and Honorary Members and then Borough Engineer, knew he was responsible for the introduction of new sewers, which involved the use of remote-control CCTV cameras to inspect the drains. At least he therefore had some experience of CCTV!

CCTV was first thought advisable after the High Street was pedestrianised. When traffic stopped running down the High Street the area ceased to be “self-policing” so measures to increase security became advisable. At first there was just one camera but the system was gradually expanded. The Council had to build all the early cameras, housings and control systems itself. All the screens in the Control Centre were 21" CRT screens, like the old TVs, so it became very warm.

The Control Centre now uses flat screens like those in modern TVs and monitors well over 300 cameras in the city and some of the nearby towns. It is manned 24 hours a day, normally with two operators monitoring the screens and with an extra operator at busy periods over the weekends. It costs £360,000 a year to run.

Modern CCTV cameras give high-resolution images and the operators can zoom in to see greater detail. We saw this happening when one operator spotted a group using cameras fitted with long lenses and zoomed in to read the organisation name displayed on their T shirts.

Each operator has two screens immediately in front of him, each displaying the scenes from four cameras, and can also see the main bank of screens. The operators are able to switch between cameras and control the cameras with joysticks.

The Control Centre has radio contact with the police and with local businesses and pubs that subscribe to the city’s TownLink and PubWatch.

The surveillance is intended to increase public safety. It is not only a matter of preventing crime or taking rapid action when it is spotted. The system can also be used to summon help if someone is taken ill in the street or there is an accident. Potential suicides have also been spotted and action taken to get someone to them as soon as possible.

Individual cameras can be programmed with a “dead area” which, in order to protect privacy, is not transmitted to the Control Centre. We were shown the output from one camera in the High Street that might incidentally enable the operator to look into the windows of private flats. Whenever the camera is turned in that direction the view of the flats is blanked out. The flats continue to be blanked out as the operator zooms in and out.

Not all the cameras overlook the streets. There are some in the Council offices, in the new Riverside Leisure Centre, in pedestrian underpasses, in parks and monitoring the top of the multi-storey car park.

We left the Control Centre with a much better understanding of the way the CCTV cameras are used to look after us - and in the knowledge that the operators were capable of checking our movements to make sure we did leave the vicinity!