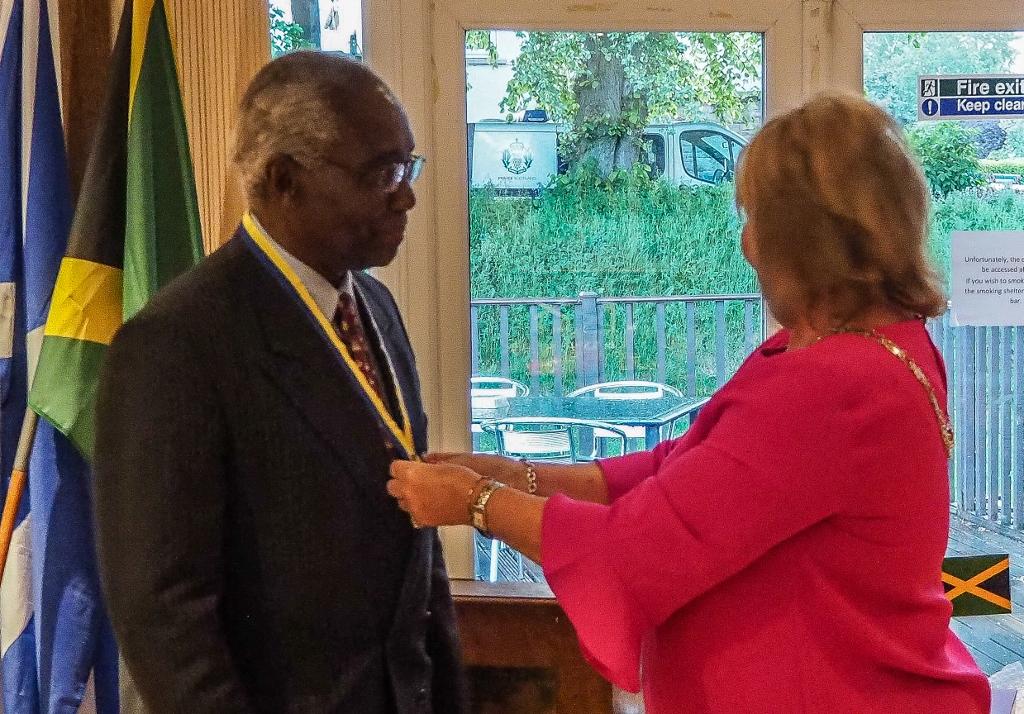 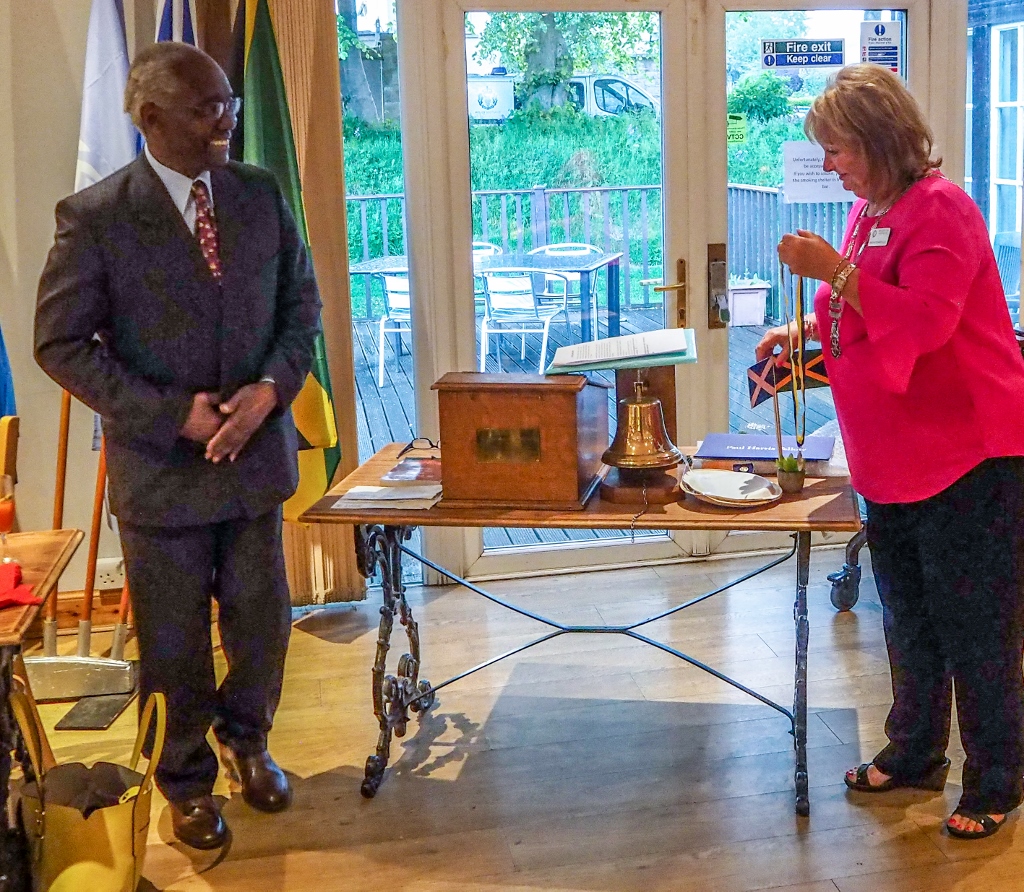 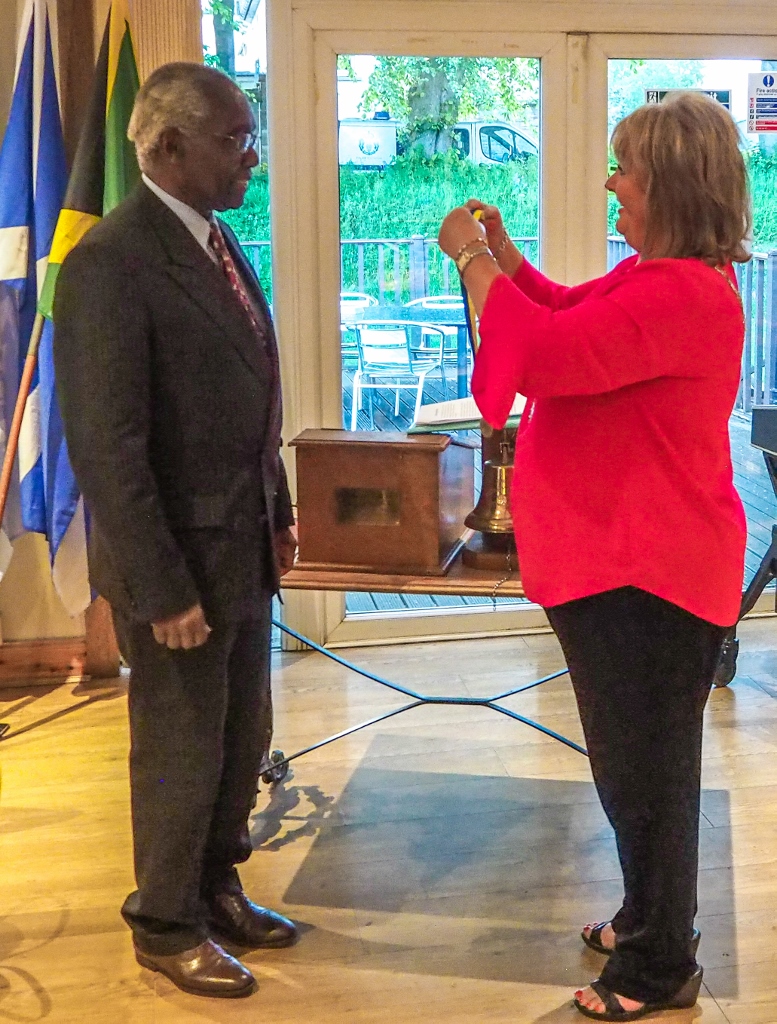 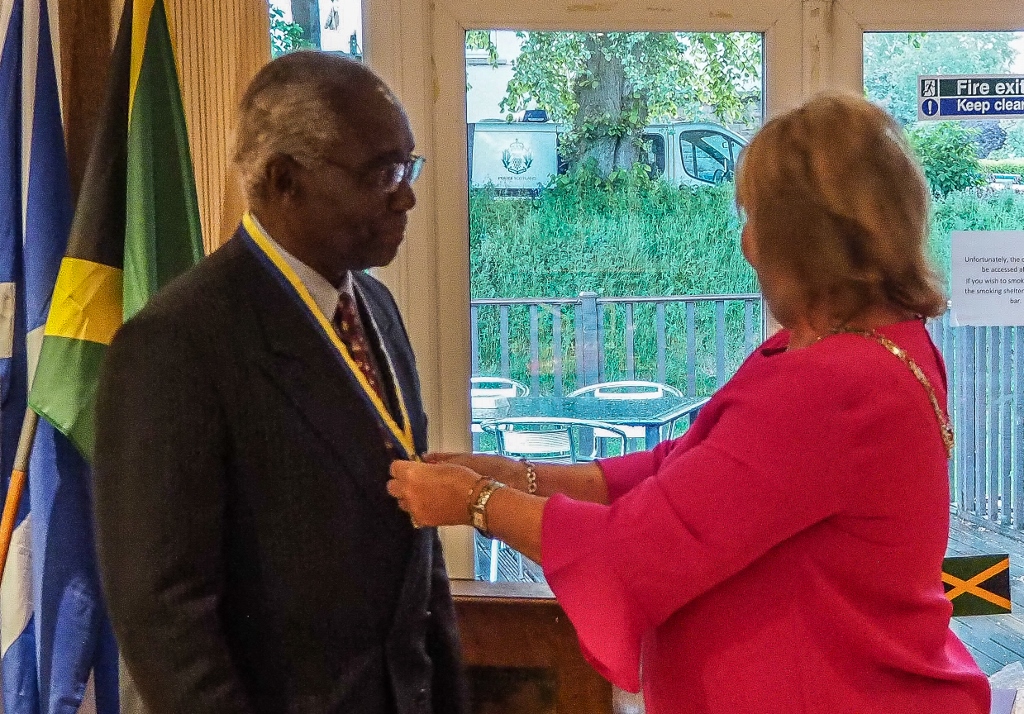 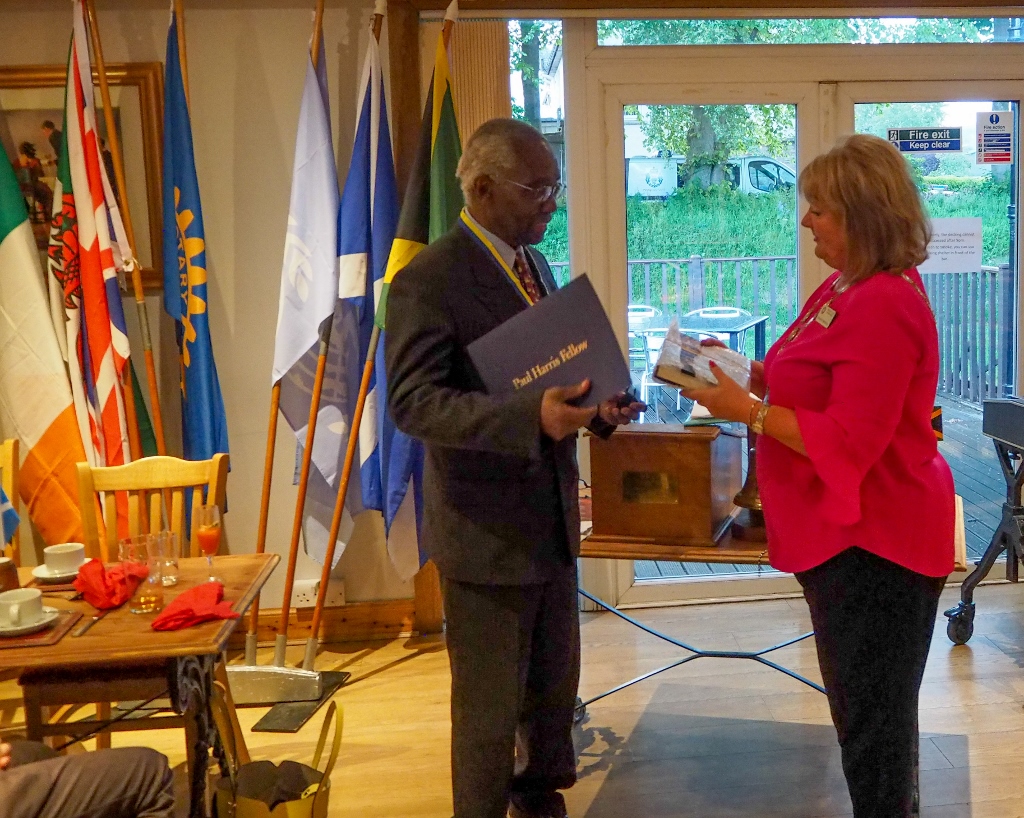 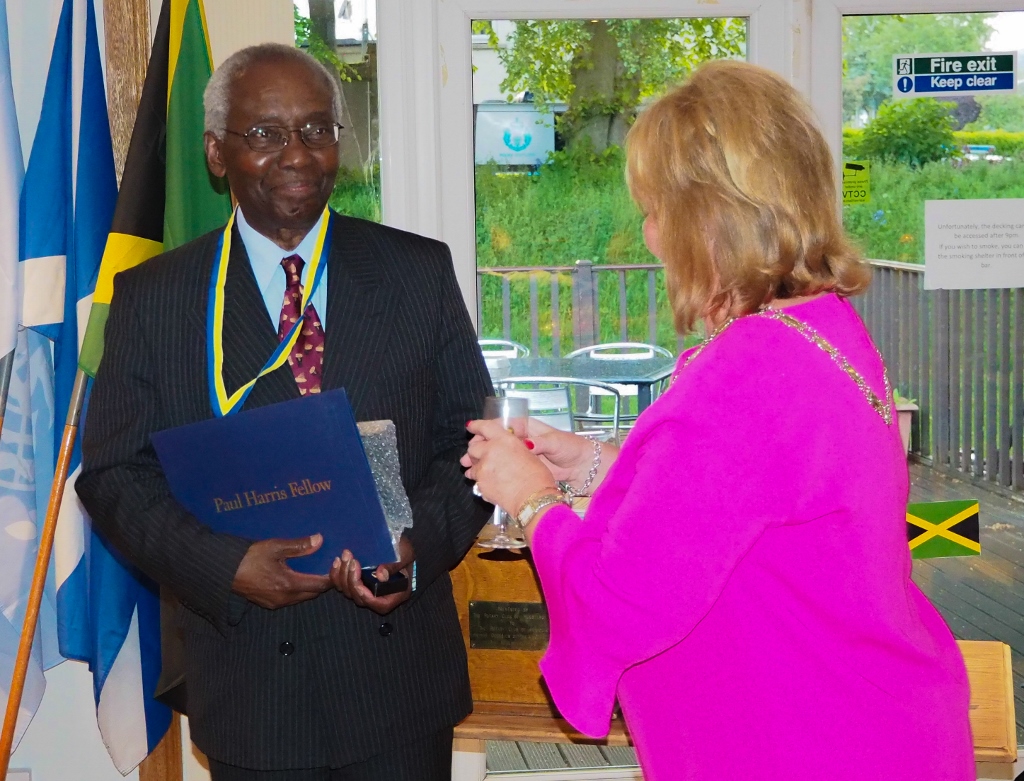 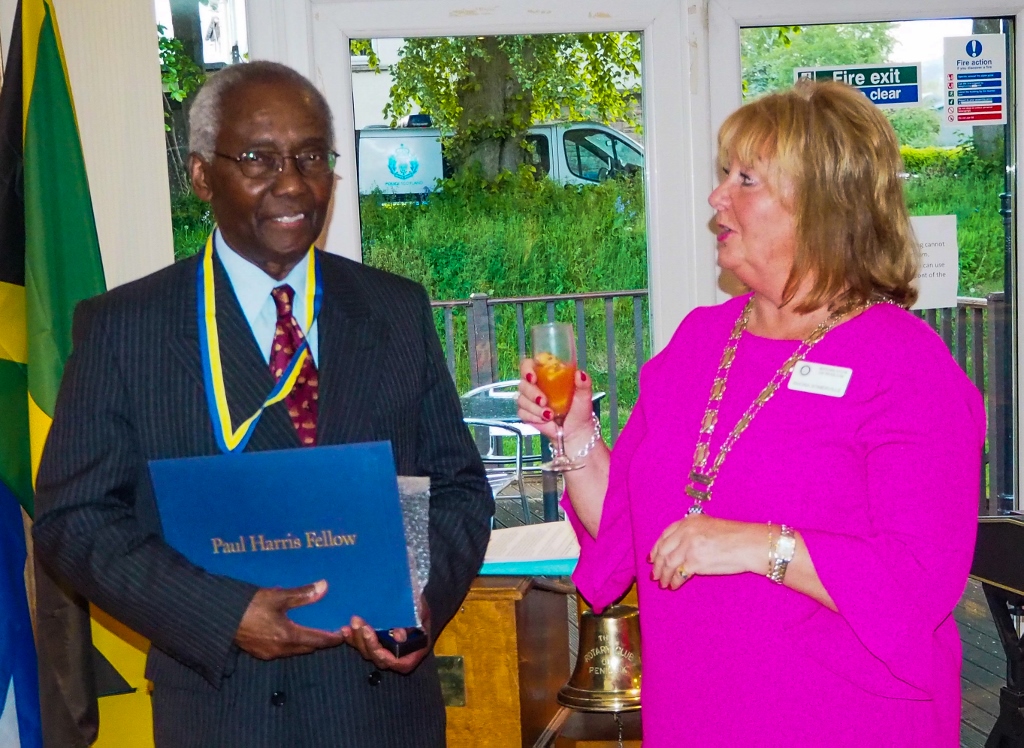 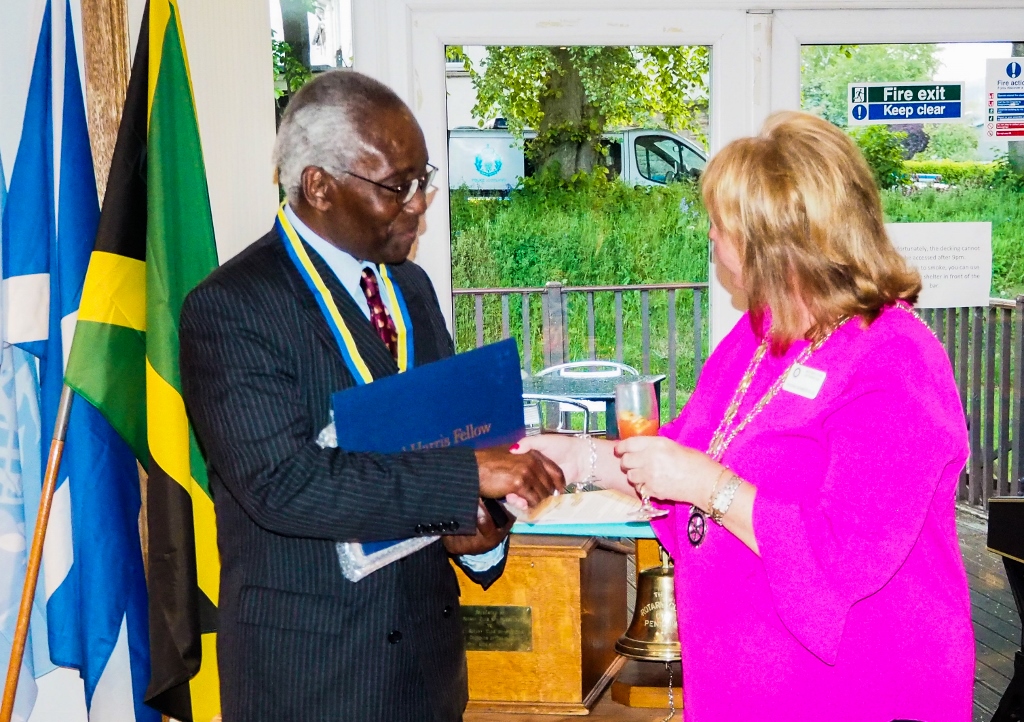 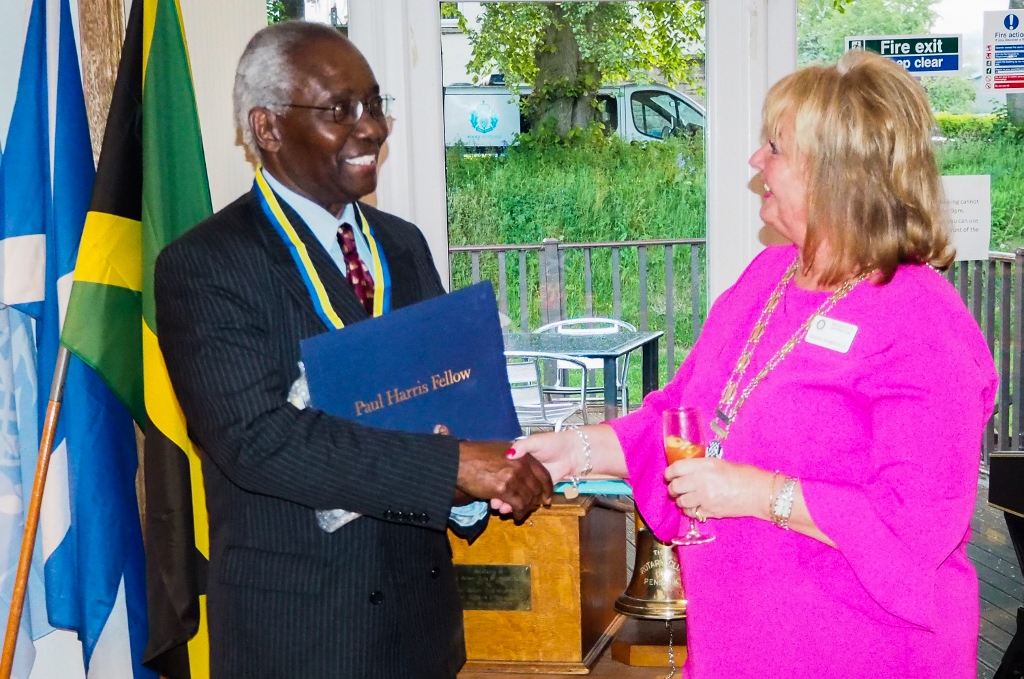 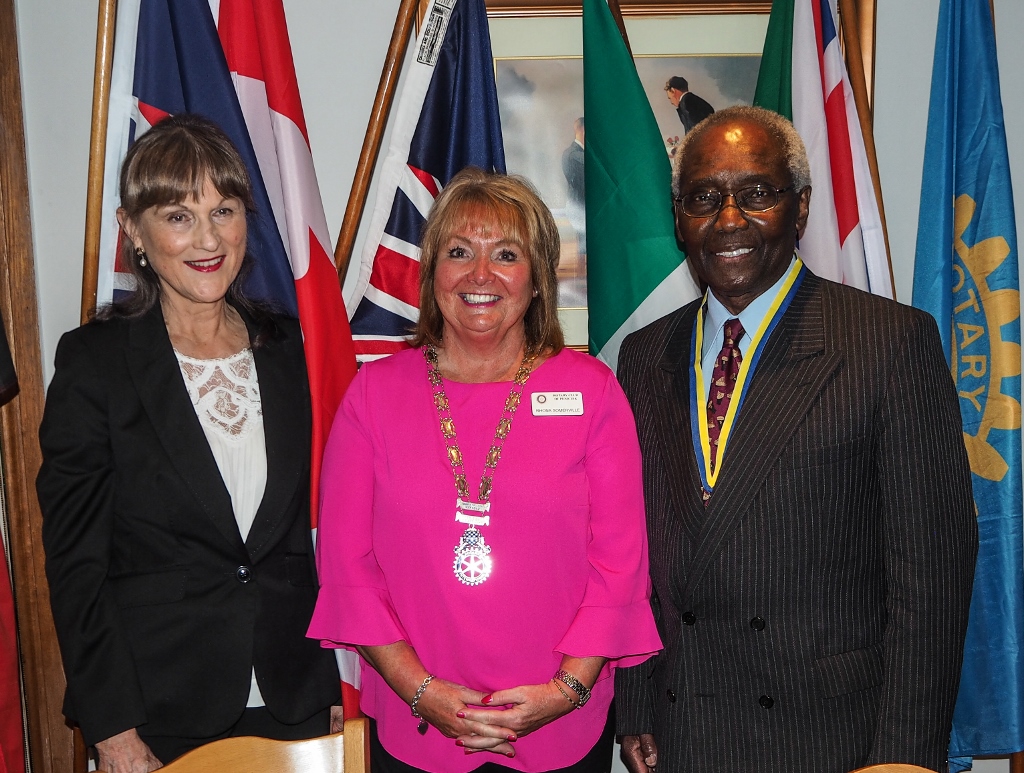 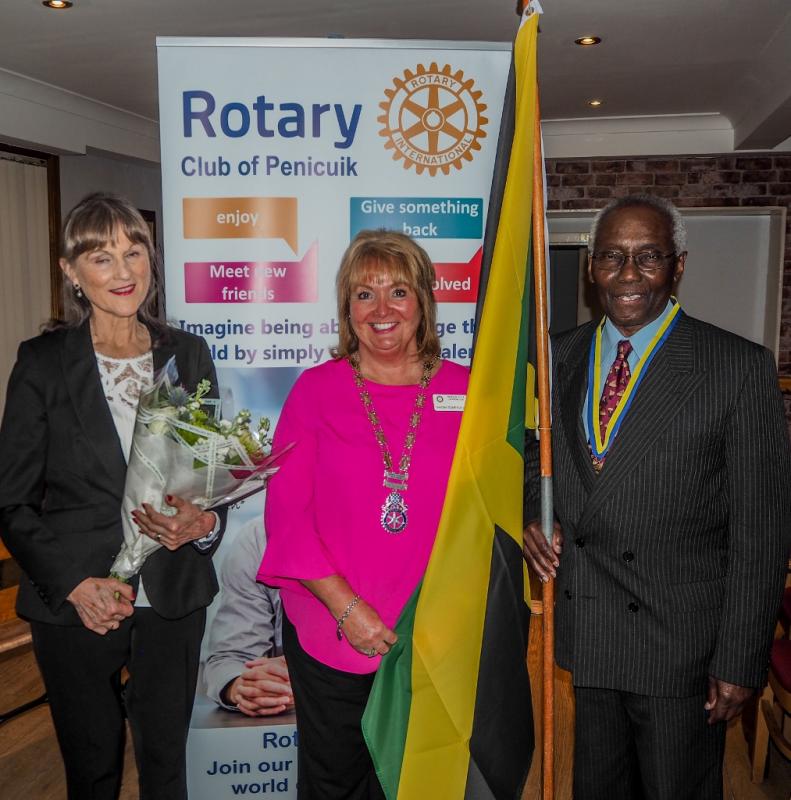 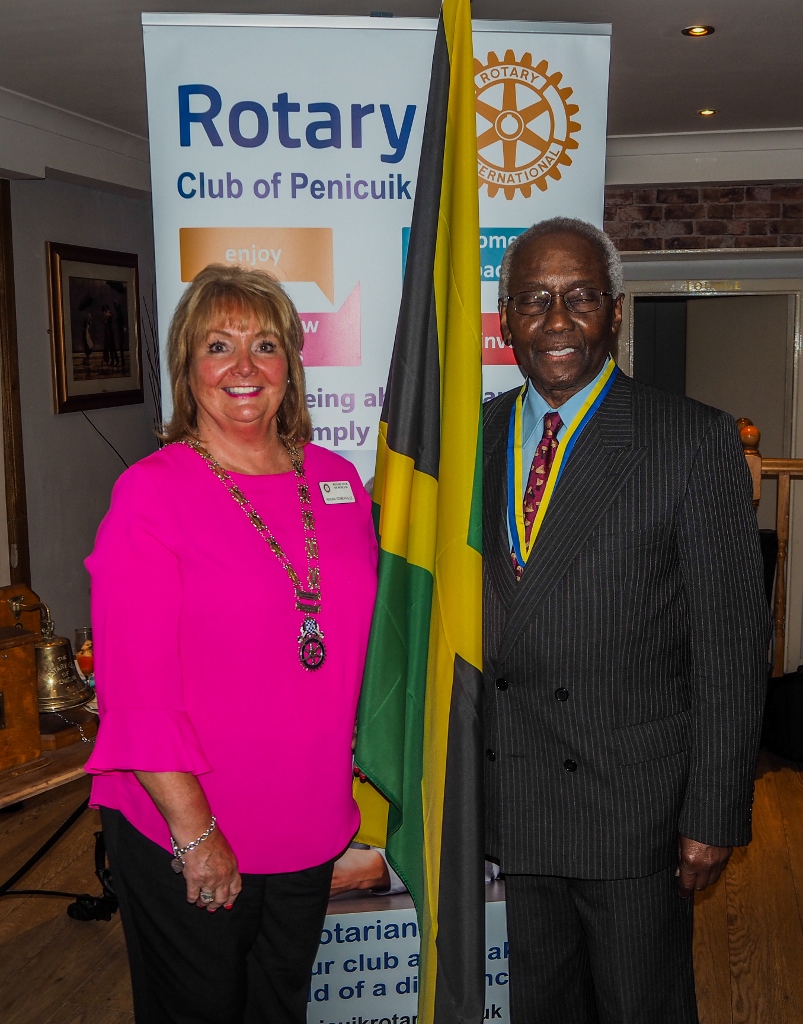 At our International Evening on 28th May, the members were delighted to be able to confer a Paul Harris Fellowship on a great friend of the club, Sir Geoff Palmer OBE.

Sir Geoff has lived in Penicuik since the 1970s. He is a Professor Emeritus in the School of Life Sciences at Heriot-Watt University in Edinburgh. He has been associated with the Rotary Club of Penicuik for a number of years and has told us much about his passions – not only about Whisky and distilling but also about human rights, the slave trade as it affected (and probably still does affect) this country, racial equality and more.

He was honoured by the award of an OBE in 2003 for his contribution to the Brewing and Distilling Industry and in 2014 was knighted for services to Human Rights, Science and Charity. He was recently appointed Jamaica’s first Honorary Consul to Scotland,

Sir Geoff was clearly touched by the warmth of his reception at the club and the tremendous affirmation from all those present for the award of a Paul Harris Fellowship to him.

Catherine Pow joined the club on 17 February. Catherine visited the club several times before taking the final step. We welcome her to the fellowship of the club and trust that she enjoys her time within Rotary.

Erin Brolly, one of our RYLA candidates visits us.

Erin Brolly one of two candidates we sponsored to attend RYLA visited the club on 2 October to tell us about her experience and show the film she had made. Erin was presented with her RYLA group picture and a certificate by Club President Gordon Sanders

The club has developed a garden with particular emphasis on plants with an evocative form, scent or touch for use by the whole community.

Roisin Timoney and Ikrah Nadeem who are S5 students at Beeslack High School both wish to have careers in International Business. They attended the Challenge Enterprise weekend during October and thoroughly enjoyed the experience and challenges.

Our Burns Supper was held in Glencorse Golf Club where members and their guests were treated to a lively evening. The event was ably organised by Ian Sommerville (again).

We are always delighted to receive guests at our meetings. Here are a selection of our more recent visitors and speakers.

Jean Lennie and Presidents wife Carol Sanders hosted a tea party for Rotary ladies who came in Easter bonnets made for the event. Over £150 was raised which will be donated to a Charity chosen at a future event. The event included a best hat competition.

Pilates of the Caribbean 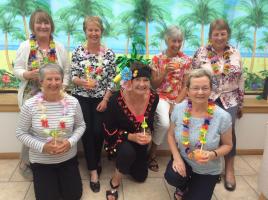 Putting the 'fun' into fundraising.

Responding to an urgent request from the local Tesco store to help out once again with the FareShare initiative to collect items for a Foodbank. several members were able to play their part in collecting food items valued at over £1,100.

Wine, a finger buffet and many prizes to be won. This was much more than just a Wine and Cheese evening. All the fun of the fair! 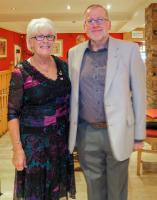 On 18th October we heard all about Rotakids from District Officer, Nancy Rule.

Donation to WaterAid in memory of three members

Sadly, over the last 12 months, we have lost the three past members of the club whose obituaries are published below. As all three were great supporters of WaterAid our members have donated £750 to that charity in their memory.

A well attended Burns Night hosted by the club was held at Glencorse Golf Club. It is remarkable that such a small group of people can put on such a diverse take on the Burns story and raise some much needed funds for our charity work in the process.

President Gordon Sanders and all the members are delighted to welcome new member Iain Steven to the fellowship and charitable activities of the club.

A group of members and friends took part in a guided walk led by a Park Ranger. The walk took around two hours and involved some strenuous climbing over tricky ground. The walkers were rewarded with spectacular views to the South and West of Edinburgh.

Rotarian Dr David Gillespie checking blood pressures in the local Tesco. All part of the Know Your Blood Pressure campaign - Rotary supporting the Stroke Association to encourage people to know what their blood pressure is - and hopefully prevent stroke.

Annual Report and Accounts 2013-14 as approved by the Club and submitted to OSCR.

Hand over and some of the new Council members

Hand over and some new Council members

Some members of the club braved the elements at Penicuik Street Fair where they sold books, toys and costume jewellery. They also took the opportunity to advertise Rotary and the Antiques and Collectables valuation night on 2 November. 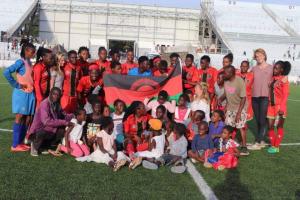 A letter from Hannah McVicar in Malawi 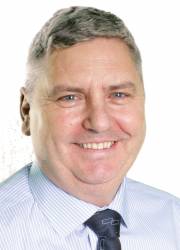 Members of the club help out at the local Tesco store to encourage shoppers to donate non perishable food items to the Food bank.

The evening was a tremendous success with around 120 guests attending. Funds were raised from tickets, Wheel of Fortune, Tombola stall and various sideshows. Proceeds are estimated to be in the region of £1,400 providing a welcome boost to our funds.

The Primary School Quiz was held in the High School for teams from local Primary schools. Congratulations to the winners Cornbank St James Primary 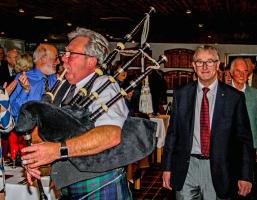 Highlights from our Burns Supper on 23 January 2018

Our RYLA candidate for 2015 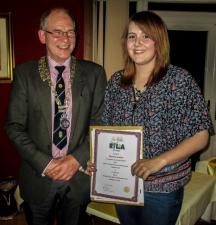 The District Governor John Barbour visited the Club and after an entertaining short talk presented Graham Young with the Paul Harris Fellowship.

For many years now volunteers from Penicuik Rotary deliver a Xmas dinner to approx thirty pensioners who are on their own on Christmas Day.

The club round of this competition was held at Beeslack High School on Friday 15th November. 15 entrants from Beeslack were joined by one girl from Penicuik High School for a keenly fought competition. The round was supported by Tesco and Giovanni's.

A Garden Challenge, offered by the Rotary Club of Penicuik, was taken up by 5 Primary Schools. Carolyn Spray of Pentland Plants very generously supplied dozens of small plug plants and seeds for each of the participating schools. Full story on Facebook.

In a tightly fought competition between four schools and following a tie break round, Cornbank Primary School were pipped at the post by Prestonpans Primary in round 2 of the quiz. Prestonpans will now take part in the District final. We wish them luck.

Burns Night at the Rotary

Somehow, each Burns Supper seems to surpass the previous one. That is probably due to each being in some way unique. We are fortunate to have a wealth of talent within the club and willing participants not afraid to enter into the spirit of the evening.

Visit to Babcocks at Rosyth 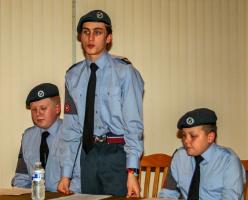 A competition for local youth groups

President Gordon Sanders presents Margaret Young with the Paul Harris Fellowship which was awarded to the late David Young shortly before he passed away.

The club organised the Primary School Quiz held on Thursday, 20th February in Penicuik High School. Seven schools took part in this first round of the three tier competition. The runaway winners were the team from Cornbank with a score of 43.

The Wine and Cheese Evening was a very popular event with over 120 people attending. There were various side shows, a wheel of fortune, tombola, a quiz based on Scottish places and of course, the wine and cheese. £1167.89 profit was made.

A very successful Charity Golf Day was held on 12 June. The event was a joint venture with Glencorse Golf Club and funds of £1,222 were raised on the day. As a result a cheque for £1,500 has now been sent to Children’s Hospice Association Scotland(CHAS) 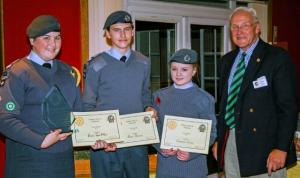 Each year we hold a local Youth speaks competition for teams of three from local youth organisations.

Dave Anderson and David McDonald uplift the trolley donations from Tesco Penicuik. A trolley with suitable posters attached was left in the store for over two weeks to seek donations of the small items required for the Mary's Meals Back Pack scheme.

A concert for the residents of Aaron House was attended by around 35 residents. Penicuik Community Choir, their leader Liz McKeon & Rotary club members Colin Hunter and David Gillespie (as The Jolly Beggars) provided the entertainment.

Lauren McLay was the winner and Vaila Robertson runner-up in the East Area round of the Young Chef competition which was held in Preston Lodge High School. The two Beeslack pupils go on to the District final to be held on 23 February. Good luck to both

The Charity Golf Day was very successful with 29 teams taking part on a glorious day. The sum of £1282 was raised from the golf and raffle enabling a cheque for £1500 from Penicuik Rotary to be presented to Children's Hospice Assocation Scotland (CHAS)

The annual report and accounts of the Rotary Club of Penicuik Trust Fund for the year to 30 June 2012 as submitted to OSCR. 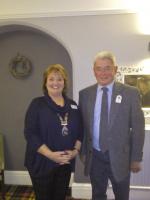 On 27th November, Stewart Houston from Biggar Rotary Club introduced us to Call my Bluff (in Scots). A very interesting night (but some dismal scores from the teams made up from our members).

Around 40 members and their guests enjoyed a Christmas Dinner. Guests included members of the local Probus Club and entertainment was provided by Jean Lennie and David Gillespie who encouraged everyone to get involved in singing Christmas carols.

The members welcome Brian Welsh to the fellowship of the club.

The final event of Hunter and Lass week. Fun for the whole family. Click here for full photo gallery. 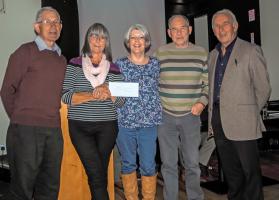 Back packs for Mary's Meals 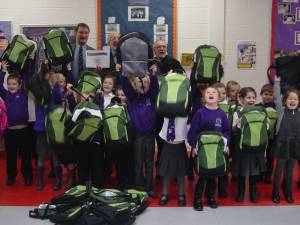 Dave Anderson, Gordon Sanders, David McDonald and Reg Dunbar went to Strathesk Primary to collect back packs for Mary's Meals and were met by enthusiastic pupils.

David Shand gave us an excellent talk on the Scottish Courts system. It was surprisingly fascinating stuff. More pics are available on the members only pages.

Melissa Lievesley, from Beeslack High School visited the club on 7 October to tell us all about her week at RYLA in July. We were all very impressed with the manner of her presentation and the depth of information she gave about her RYLA experience.

Many members and some partners undertook the 12/13 mile walk from Penicuik to Musselburgh. Setting out in glorious weather they were glad of the lunch break in Dalkeith School Campus before completing the final 4 miles to refreshments in Musselburgh 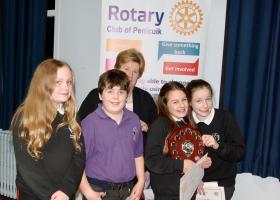 The recruitment of students from abroad

Back Packs for Mary's Meals Members of the club and in some cases their families have provided 31 filled back packs for Mary's Meals.

A Burns Supper with a difference The club held its Burns Supper at Glencorse Golf Club on Tuesday 22nd January. This was a slightly different event from recent years as, with a lady President currently in place, it seemed appropriate to make it a Jean Armour night. Read full story here

In the company of members of the Rotary Club of Loanhead and Roslin, members enjoyed the Annual Dinner Dance at the Original Roslin Hotel on 22 November.

District Governor Alistair Marquis gave a very entertaining, thought provoking and informative presentation on the subject of the Rotary theme for the year ‘Light up Rotary’. Alistair certainly lit up Penicuik Rotary with his visit.

Rotary at Street Fair in Penicuik

On 23 August we again attended the annual Street Fair held in Penicuik. This gives us an opportunity to present the face of Rotary to the community and raise awareness of the club and the work that we do both for the local community and internationally.