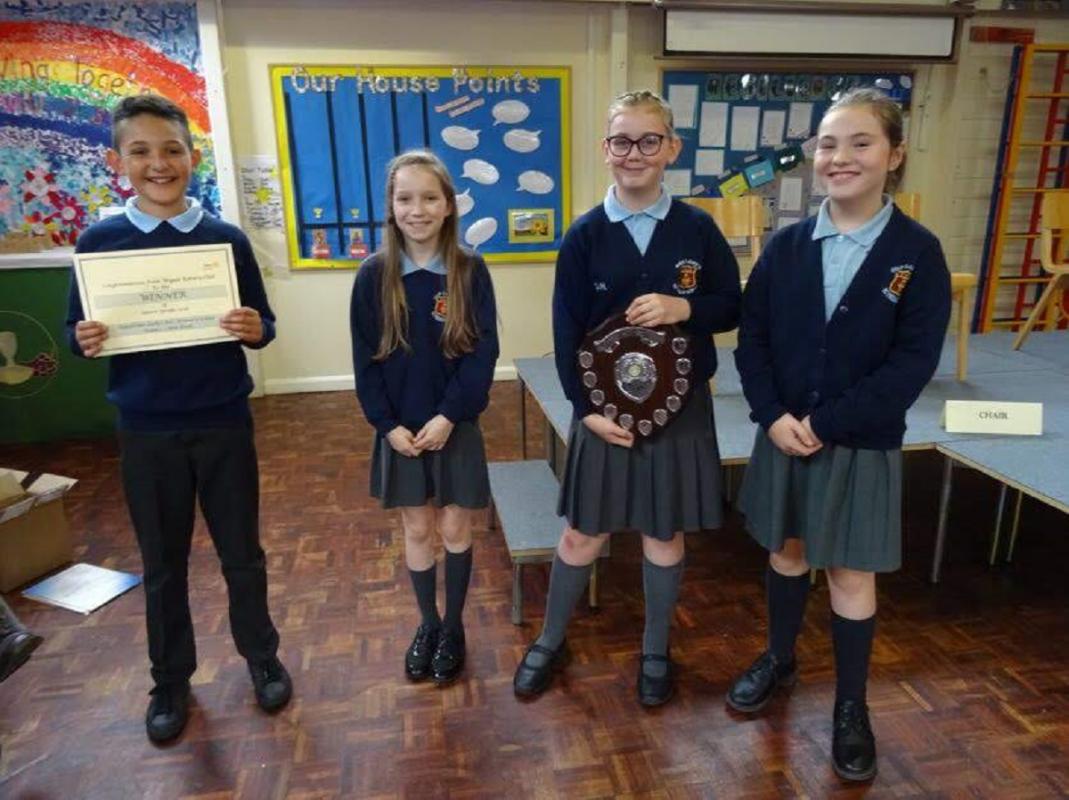 Since 2008 Wigan Rotary Club has organised a competition for year 6 pupils in Wigan Primary Schools called Junior Speaks. The teams consisting of a Chairperson, a Speaker and someone to propose a Vote of Thanks are asked to make a presentation on an appropriate subject of their choice. The contest encourages pupils to control their nerves, develop their speaking skills and deliver a speech with confidence.  The standard has improved year on year and the subjects chosen have become more mature with evidence of research becoming increasingly apparent.

The 2018 Competition took place on the 17th October at the Our Lady’s RC Primary School in Aspull, and six Primary Schools participated.  Each team rose to the challenge wonderfully. Their topics were broad based and challenging.  In fact, it is true to say that these young people never cease to amaze and delight us with the quality of their presentations. The judges, as a result, had a very difficult job and there was little to separate some of the teams.

However, there could be only one winner and the Hoddinott Shield for 2018 went to Aspull Our Lady’s RC Primary School’s Team 1, “Skin Deep”.  The Hoddinott Shield was presented by Wigan Rotary President John Wright on behalf of Mrs. Doreen Hoddinott who was unable to be present, to a very excited team, who also received an invitation to go to The Owls on the 8th November in order to repeat their winning performance for the members of Wigan Rotary Club at their lunchtime meeting.  Many congratulations to them, under very stiff competition, they were worthy winners. Their team’s topic was “Body Image – Anorexia”.

The other participating teams were namely Aspull Our Lady’s RC PS Teams 2 Patience and 3 Rainbows whose topics were ‘Stuttering’ and ‘Racism’ respectively.  Aspull Church PS whose topic was ‘The Problem with Plastic’.  St. Wilfrid’s C of E PS topic, ‘What does it mean to be both Equal and Diverse’ and St Mary and St John Catholic PS topic ‘Pollution in the Ocean’.  Each school was presented with a certificate, and each child with an Usborne dictionary by Wigan Rotary President, John Wright to mark their achievement.  It was a wonderful morning and a delight to witness such amazing, confident presentations from all the young people who participated for their schools.  The Judges commented on the very high standard once again this year.