The story of a 'Virtual 'London Marathon

Why the challenge was important 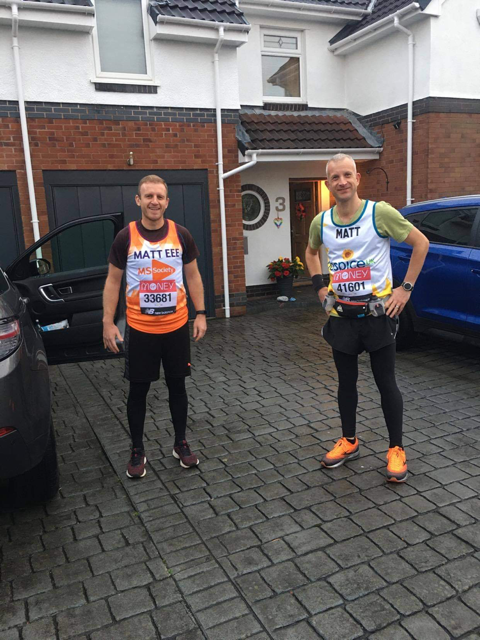 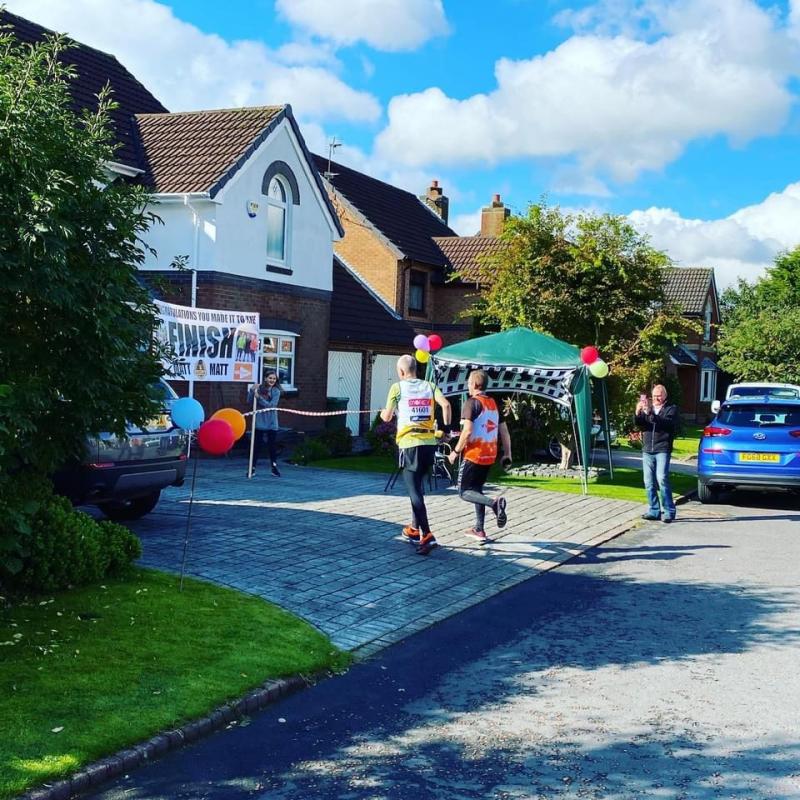 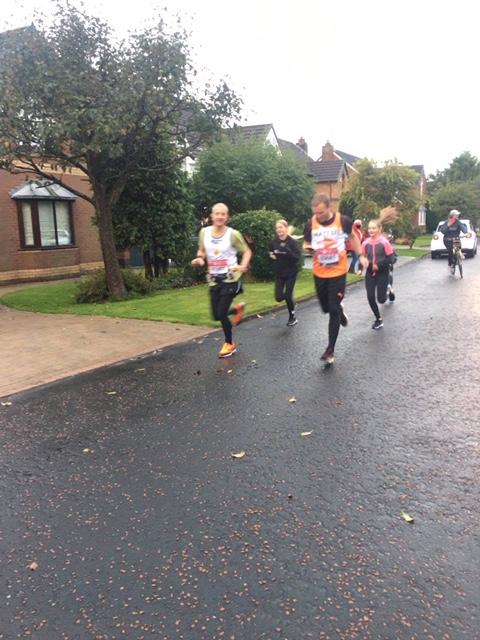 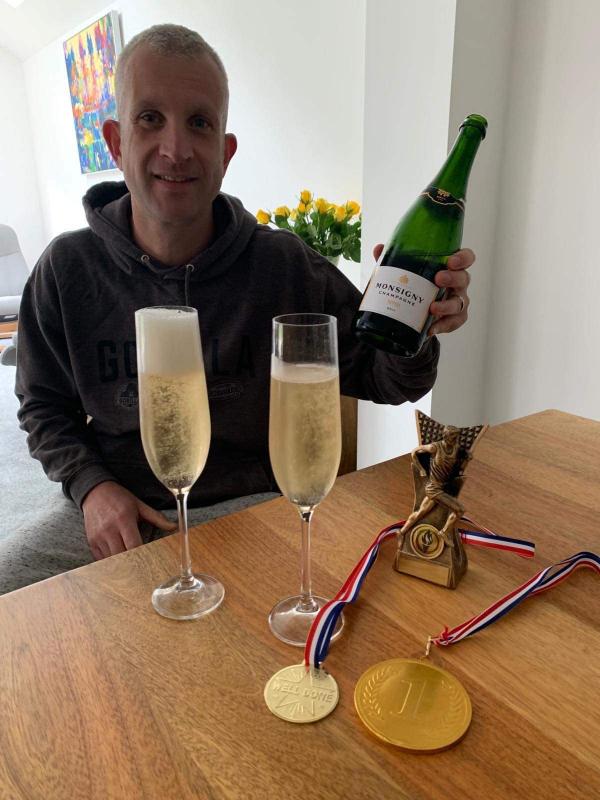 “A Standisher hit the height of his fitness fight recently - doing a” virtual” London Marathon from Standish.   Matt Clegg, Wigan Rotarians Aukjie and Alan Clegg’s son, used running to get himself fit for turning 40 and  he raced 26 miles, raising money for charity, all at the same time..

I’m Standisher, born and bred. Recently, I took on a huge personal challenge for an amazing cause.   If you saw me and my running buddy wearing a Charity Bib and a London Marathon race number I hope you didn’t thing we were lost!  I hope you gave us a wave as

we needed all the friendly local support we could get so read on and I will explain why....

In March 2019, I was 39 and a marathon couldn’t have felt further away. I looked in the mirror and realised I’d become lazy. I was carrying more weight than I’d like and was as far from healthy as I’d ever been.   A colleague at work suggested I should join a group of a dozen doing the Chorley 10k for charity.   I laughed, I thought it would be easy. I ran a 3k loop around Standish and struggled the whole way round.... jogging, walking and wheezing!

That experience changed my life entirely... bit by bit I began to sort myself out.

I bought a Garmin watch to track my steps  and some decent running gear.  I decided to bike the 8 miles to work from Standish to  Leyland, shower and then bike home after a days work. That later switched to running to work 2-3 times a week... that’s a long day!   I stopped drinking booze in the week- not that I drank a lot. I watched what I ate, cutting out meat & fish entirely focussing on plant based protein.   Every other day, I ran.   Almost by surprise, I ran the Chorley 10k in 52 minutes, finishing ahead of all of my colleagues and I was hooked.

The extra weight dropped off.  I slept better.  I felt happier.

Over 6 months, I ran in 10 countries… Norway, Sweden, Finland, Germany with several goals for 2020 lined up including running 2,020 miles and running in 20 countries.  I also signed up for the Wigan 10k (which I ran in 40 minutes), the Manchester Half Marathon in October 2019 (which I ran in 1hr 42 mins) and then I secured a charity place at the 40th London Marathon expecting it take place in April 2020, running for a fabulous charity- Hospice UK.

I was ahead of even my own expectations.

And then Covid-19 hit…. And affected me like it did for so many.   As you will recall this  was a matter of weeks before the 40th London Marathon date.  So I braced myself and kept running.  I had to stay fit.   My routine was to get up at 5 am  to run before the pavements got busy and by this point was running 50-60 miles a week, often before anyone else in my house was awake.   I found new routes exploring Lancashire and Greater Manchester to keep myself interested and motivated.  Canal tow paths, hills, parks even deserted city centres mid-lockdown.   Weirdly, this kept me sane; though I did also work the whole way through the lockdown.

The 2020 London Marathon was inevitably postponed around 4 weeks before the run was due to take place. Physically I didn’t care… I was fitter than I’d ever been.  But mentally, it was frustrating and disappointing.   And then the new date came - the 4th October 2020.   My fundraising was going so well and though that money was banked, I felt like I owed it to my sponsors and myself to keep going and stay healthy.   So ensued a Summer of running… in many ways it was harder… running in the heat is way worse than running in the cold.  I’m sure many Standishers saw me!  I had left no stone unturned in Standish and the surrounding area.

The hardest blow came in August, as the organisers of the Marathon understandably decided it best to cancel once again the Marathon in London in its current form entirely and to set a new date of October 2021.

Without a doubt, this hit me harder than I could have realised and mentally I struggled for a good few weeks for motivation.  April 2021 was where I thought this decision would go. Therefore, another Winter of training lies ahead.  But,  hidden away in the small print of their announcement was the introduction of the “Virtual London Marathon” on October 4th 2020.   It was a deceiving title; there was nothing ‘virtual’ about that Sunday.

I RAN 26.2 miles. From Standish, through to Leyland - Worden Park, passed my company office, then Chorley - Astley Park, Duxbury, Worthington Lakes and then back through Standish up the long hill home.  And for that, I got a London Marathon finishers medal.

My employers - Gorilla Glue - were with me from start to finish and absolutely amazing. Fuelling my motivation, colleagues topping up the fund raising pot and allowing running to be such a big part of my days - I’m sure I bored them regularly (sorry!).

That Sunday, a colleague and friend of mine, another Matt (Aston) ran the route with me (at a safe distance of course).  He ran for the MS Society.   He drove up from his home in Birmingham with no family or friends to cheer him on due to household mixing restrictions.

My own friends and family had to stay in their own bubbles and man the streets (at a safe distance and in groups no bigger than 6!) to pass water and bananas to keep us going.  Plus

There were no parties after the run, another disappointment unfortunately, but we wanted to keep everyone safe and healthy.

That Sunday brought somewhere around 4 hours of solid uninterrupted running.  That’s a big difference to the slightly plumper version of me that set off running last year to stumble around Standish 18 months ago unable to do a 3k!!   We saw lots of people... they waved... and blew their horns.... We fought our way around boosted by every bit of support we got.

I’d particularly like to thank my amazing wife Louise for her support, encouragement and patience and everyone else who were so tolerant and supportive over the last 18 months.  She and my family were with me all the way and they will be again in October 2021 when I will run the London Marathon…. Finally.

Both Matt A and I would be delighted to accept any more donations to our amazing charities, who need them now more than ever before.