Another blow for Wigan Rotary

The Club loses another stalwart 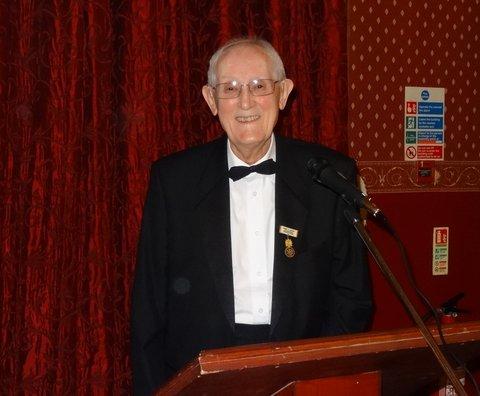 It is with great sadness that Wigan Rotary Club President Rosemary announced the death of Rotarian Derek Burney aged 93 on the 10th January 2021.  He joined Wigan Rotary Club in 1967 and received his certificate commemorating 50 years of membership in 2017.  He had also been awarded a Paul Harris Fellowship after 40 years of service.  He achieved 53 years of membership at his death.

Derek was also a member of Wigan Round Table, Wigan Music Society of which he was a trustee, Probus of which he had been a Chair and was also a very keen member of the local RSPB.  He enjoyed other hobbies like photography, and he was musical, playing both the piano and the organ.  He embraced new technology and used his iPad and his computer simultaneously.  He was a very capable, likeable character who was quite the raconteur, enjoying recounting tales of his life at boarding school.

He was sent as a boarder to Holmwood Preparatory School in Formby followed by Oundle School.  He then joined the family leather business, making handbags, gloves and purses. When his father sold the business and retired to Wales,  Derek re-started the business selling to some prestigious retailers including Boots Salisbury’s handbags and Marks and Spencer and even had a contract to supply purses and glasses-cases to Concorde for them to give to their passengers. His father was a former Captain of Arley Golf Club in 1957.

Derek was a very kind and generous man, always putting others before himself.  He regularly supported a number of charities including Médecins Sans Frontières, RSPB, Redwings, WWF, IFAW and Sightsavers. He was someone you could rely on to lift your spirits with his quiet sense of humour especially when things were a little difficult.  He always seemed to be able to see the bright side of any situation.

He married Audrey, who was a member of Inner Wheel, Ladies Circle and Tangent, who, sadly, died thirty years ago.  He was also a great family man and had two daughters who he enjoyed visiting.  They are married and both live 200 miles or so from Wigan, one in the north east and the other in the south east of England, and he also had two grandchildren and three great-grandchildren.  As a family they were very keen caravanners, travelling all over England and he loved exchanging stories about their adventures with members of the club.

In recent times, before lockdown, health issues meant he could no longer drive making it difficult for him to attend Rotary meetings and several members took it in turns to bring him.  His sense of humour never waned and he kept cheerful under great duress.  He will be greatly missed and will not be forgotten by those who had the privilege to know him.