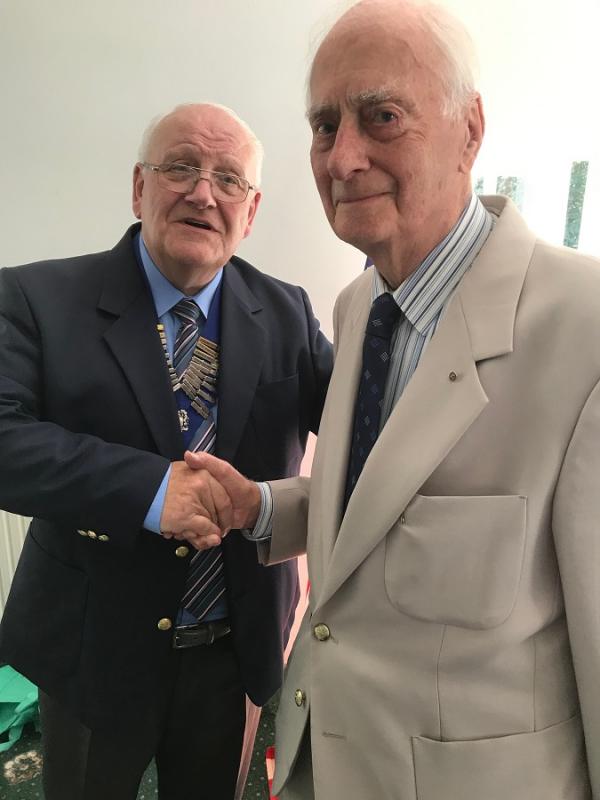 At a recent Rotary Club lunch the new President Mervyn Reeves, had the great pleasure of announcing that Rtn. John Coupe was to be made an Honorary Member of the Wigan Club.  John has given the club valuable service during the last 46 years and was the recipient of a Paul Harris Fellowship in 2008 as an acknowledgement of his tremendous achievements.  As he will be 90 years old in July it was felt this was now the most appropriate way of celebrating of all his achievements.

During the last 29 years he has organized the local Rotary Town Quiz along with fellow Rotarians who compiles it.  John deals with the administrative side of printing, distribution of the entry forms and collection boxes for the fees.  The money raised supports the Rotary Foundation Charity.

He was one of the members instrumental in setting up a Rotaract Club.  He was, together with fellow Rotarians, responsible for the setting up of the Standish Probus Club in 2001 and was a founder member.  He has held the office of founder treasurer and held the office of Chairman this year in 2013.

John is married to Margaret and their family consists of 5 children, 14 grandchildren, and 7 great grandchildren.  He enjoys gardening, reading, has travelled extensively.